Skip to content
Home / Delve into the Depths in the Kobold Blog / Tour of the Empire: The Throttle, a Darakhul Outpost 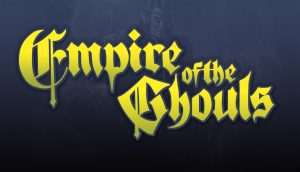 A ghastly, green fire flickers in a long-forgotten tomb. From within comes a thunderous crash as the lid of a stone sarcophagus is contemptuously flung aside, followed by the clank of armor and the dread sound of footsteps. Something ancient and evil is coming to claim the night. That ancient evil is none other than Empire of the Ghouls—the new 5th Edition Kickstarter from Kobold Press…

This wide, rough-hewn cavern has been set as an outpost by the Ghoul Imperium. The Throttle, as the ghouls call it, is a checkpoint on the safest route from the Free City of Zobeck to Darakhan, the darakhul capital.

Ceiling. The uneven cavern ceiling ranges in height but stretches to a maximum of 90 feet. Large stalactites loom ominously from the ceiling like giant icicles formed of rock, making it appear almost as if the cavern is melting.

Walls. The sides of the cavern are uneven. In some areas, jagged rock protrudes from the stone walls, and in others, smaller stalactites drip from the walls.

Uneven Ground. The floor of the cavern is littered with rocks, pebbles, and pieces of broken cave formations. Stalagmites protrude from the cavern floor at uneven intervals. The area is difficult terrain, other than the road down the middle of the chamber.

The Travelled Path. Due to the travels of Ghoul Empire soldiers, the center of the cavern has been worn into a useable path. Stretching 10 feet wide in most areas, the ground here is mostly smooth and free of rocks and debris.

Light. The cavern stands in darkness. Near either end of the cavern, strange spots of luminescence, created by glow worms, light up the high ceiling like stars on a clear evening. In the centre of the cavern, only a few single dots appear. The illumination is too dim to allow creatures without darkvision to see.

Sound. Noise carries in this expansive stone cavern. Creatures attempting to move stealthily through it have disadvantage on Dexterity (Stealth) checks. Loud noises cause showers of pebbles to fall from the ceiling.

Barricades. At its widest point, the cavern stretches a mile, and here the gaps between the stalagmites have been stuffed with debris, creating two high shelf-walls with an opening between them to allow traffic through. Located on a main branch of tunnels, this choke point is intended to slow down those who use it.

Hazards. The cavern is strangely resonant. Any attack, spell, or other effect that deals thunder damage in this area has a 25% chance of causing stalactites to fall from the ceiling, dealing 10 (3d6) bludgeoning damage to creatures standing below. Succeeding at a DC 15 Dexterity saving throw halves this damage. Each of the imperial ghouls has a single crossbow bolt enchanted to deal 3 (1d6) thunder damage to all creatures within 10 feet of its target. If one of these bolts strikes within 10 feet of the massive stalactites around the choke point, they will collapse, blocking the road and dealing 20 (6d6) bludgeoning damage to all creatures beneath them. This damage is halved with a successful DC 15 Dexterity saving throw. If the path is blocked in this manner, it takes four creatures eight hours to clear it enough to pass through.

Two pairs of imperial ghouls make their way between the barricade and the entrances to a maze of narrow tunnels leading off the main area. They often travel along the main path, but there is a 25% chance they divert their course and patrol the outer area of the chamber.

Pairs of darakhul patrol both sides of the wall at all hours. A total of four groups of three imperial ghouls keep watch from the top of the walls, two groups on each side, ready to fire their crossbows at intruders attempting to scale the rocks or attack their companions.

Creatures hoping to dispatch the sentries and avoid the darakhul outpost by navigating this warren are faced with five large black puddings. The creatures move about the narrow tunnels, often climbing walls and the ceiling before dropping on their victims.

Navigating the maze of tunnels in order to re-enter the large cavern on the other side of the barricade takes a DC 17 Wisdom (Survival) check. Failure results in wandering the caverns for one hour before returning to this cavern on the side they entered. Failure by more than 5 leads the party out of this area and down winding tunnels in the opposite direction.

The primary purpose of the Throttle is to prevent enemies of the Imperium, which is almost every intelligent being, from accessing the capital city. Its secondary function is to capture food and slave stock for the emperor.

When travelers pass through, the darakhul manning the stalagmite wall hail them, asking their names and the purpose for their travel. While they do this, the darakhul who typically patrol the wall attempt to slip into position unnoticed. As the imperial ghouls end their questioning, the darakhul strike. Attempting to subdue their foes, the darakhul knock their enemies out once they reach 0 hp. Failing that, they stabilize their fallen foes once battle has ended. Prisoners are relieved of their weapons and moved to a permanent structure in the camp for questioning.

The bases of the two walls to either side of the 60-ft. opening are lined with collapsible tents and small permanent structures. Here the remaining darakhul stand watch, discuss strategy, and await orders. Darakhul messengers riding giant spiders pass through the outpost to deliver messages from larger darakhul settlements.

The commander of the outpost is Pryor Ellsmark, an iron ghoul. His right hand Dru Wytchlight, a darakhul shadowmancer, is never without her two shadow skeletons.

A total of twenty imperial ghouls and six darakhul ghouls are based at this outpost.

One of the small permanent structures in the camp serves as a prison. Intruders taken captive are stripped of their weapons, armor, and tools before being brought here for questioning by Pryor Ellsmark and Dru Wytchlight. Once the pair have finished assessing the prisoners, weak ones are consumed at the outpost while stronger specimens, or ones who have withstood their torture, are hooded and led to the capital for the emperor and his bureaucrats to question further or otherwise decide their fate.

Food given to the prisoners consists of musty-tasting fungus, small portions of cave lizard or giant spider, and fetid water collected from the dripping stalactites.

The prison currently houses Heinrek Klaussen, a spy for the Blue House in Zobeck, and Zylanthea, a shadow fey guardian from Corremel, City of Shadows.

Barsella, Jailer for the Throttle. The jailer is an imperial ghoul named Barsella, after the city she originates from. She collects dice and will show small kindnesses, such as an extra scrap or two of food or a rumor of goings-on in the ghoul capital, to prisoners who give her a die or two.

This small chamber looks more like a war room rather than living quarters. An unevenly shaped but perfectly flat slab of stone stands in the middle of the room. Maps of the area, both above and below ground, take up the majority of the tabletop. A small, lacquered chest holds missives and orders from the capital. Commander Ellsmark endlessly works and reworks his plans for the defense of the outpost from this room.

Pryor Ellsmark, Commander of the Throttle. In life, Pryor was the mediocre captain of a mediocre mercenary company operating near the Free City of Zobeck. When his company was wiped out in a skirmish with reaver dwarves, the captain was gravely injured. Left for dead with the corpses of his former unit, Pryor had few options but to consume their decomposing flesh. Despite this, Pryor succumbed to his injuries but woke the following day as a darakhul. Finding his way into the company of other darakhul, Pryor was commissioned into the army and fought in several notable battles during the taking of Krakova. Command of the Throttle was granted to Pryor for his deeds during the war, and he is desperate to prove himself, unaware that his second is already plotting his overthrow.

A large, silk-covered divan occupies much of the space in this room with plush, silken cushions scattered about the rest of it. A small, round-topped table stands near the divan, piled high with books on surface world customs, history, and religion.

Dru Wytchlight, Second-in-Command. Assigned to provide arcane support to the commander of the Throttle, Dru Wytchlight seethes to take control from Pryor Ellsmark. She is currently using her time questioning Zylanthea to instead learn about the Shadow Realm and which of its power players might ally with her in overturning Ellsmark’s command and turning the outpost to her own purposes.