Skip to content
Home / Delve into the Depths in the Kobold Blog / Grand Duchy: Rafting Crew of Jerriberg 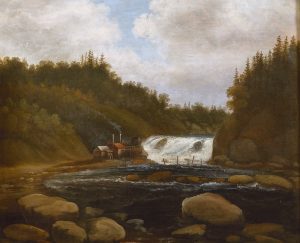 Adventurers planning their first foray into the vast greenery of the Arbonnesse are advised to seek out the services of the Rafting Crew, a company of trailblazers based in Jerriberg. The two-story warehouse of gray, weather-beaten wood siding on a hillock on the outskirts of town serves as the company headquarters and supply depot. Corrals of ponies and pack-mules adjoin it.

No shingle or signboard marks the location. As the company’s founder, the halfling Maribell Wispsong, explains: “Any adventurer that can’t find us in a town of Jerriberg’s size, prob’ly got no business on an expedition into the great forest.”

Wispsong resides permanently at “The Barn,” as the crew calls its base. She manages accounts and organizes expeditions, overseeing their outfitting and assigning a guide from the company roster. She has a keen eye and can spot a tenderfoot at a “hundred paces.”

Wispsong founded the company some thirty years earlier in partnership with the Rafting Crew’s signature guide, the rugged and bearded elfmarked pathfinder, Ramdall Coppa. Locally, Ramdall is known as “Longstem,” a reference to his lanky frame and his penchant for settling in beside a campfire after a day’s trek to take a puff from the longstem pipe he keeps tucked into his belt. Although Longstem has the expertise and personality required for any expedition, Wispsong keeps the old hand in reserve to lead established adventuring companies on the most difficult treks.

While Ramdall is the public face of the enterprise, he hasn’t the head for business. As he says: “I take ’em out and bring ’em back. Train up a batch of new guides when the old ones get themselves kill’t. Everything else, I leave to Wispsong’s keepin’”

Wispsong prides herself on matching guides to expeditions, knowing that tenderfoots require special care, treasure-seekers a firm hand, and hunters an experienced tracker. As a group, they are at a glance indistinguishable, clad in breeches of doeskin, faces weathered to leather, stoic in their element and each lacking in some of the social graces required when dealing with “civilized” townsfolk.

Otherwise, she has this roster of guides to choose from:

Jonas Steward, elfmarked cleric of Yarila and Porevit, who often accompanies pilgrims during religious journeys into the green. He knows the location of many glades and natural fountains considered to be spiritual guideposts.

Aubrey Whitewater, elfmarked sorcerer, who has an uncanny knack for navigating rafts and canoes along the forest’s waterways, including rapids. There’s more to it than just managing the currents and sticking to the channel; the forest’s rivers and streams are infused with residual ley line magic, and that must be accounted for too.

Buckskin Roager, human barbarian, a tracker more than half the townsfolk actually believes is goblin-blooded for his brusque manner and ungainly physique. Despite Roager’s often overpowering musky scent, he is the guide of choice for anyone venturing into goblin territory.

Tress Hartgrove, elfmarked ranger, a hot-blooded hunter, reputed as an able archer and expert with the knife. Her fiery affair with Longstem is still the talk of Jerriberg, even though it took place nearly twenty years ago and ended with him being pinned to “The Barn’s” sidewalls by a dozen of her knives. The pair rarely talk to one another, rarely are in the same room together, but never hesitate to ask after one another’s progress on an expedition.

Darspin Trelorin, elfmarked druid, who considers himself an outcast from the region’s druid circles for an offense which he’s not forgiven himself nor disclosed any details. Overtures of welcome and reconciliation from the druid circles have not been acknowledged. Some say he is a reckless trailblazer, others call his ventures daring.