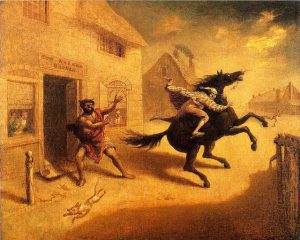 Most people will pay lip service to the idea that tieflings aren’t inherently evil. That these men and women, whose forms have been twisted by an infernal lineage, can turn their backs on the darkness that has seeped into their blood. Many of them do just that, by using their innate powers to fight against devils, demons, and the more natural evils of the material plane. When crops die, cows cease giving milk, or people begin disappearing (or worse, are found sacrificed in bloody rituals), tieflings are often the first to feel the heavy weight of accusation, though.

Some tieflings attempt to forgive their accusers and to rise above prejudices directed toward them. Others will take that inherent fear, and turn it back against the angry mobs and witch hunters of the world.

The Devil’s Own doesn’t require any specific, mechanical tricks; it mostly works based on having a high Intimidate score. With that said, you can bolster the concept by investing in feats like Dazzling Display (Core Rulebook, page 120), Intimidating Prowess (Core Rulebook, page 128), and Gory Finish (Ultimate Combat, page 102) which allow you to turn Intimidate checks into a viable strategy during combat. You could also take a few levels of the Thug rogue archetype (Advanced Player’s Guide, page 135), which automatically worsens any fear-based conditions you create by being intimidating.

For specific tips and tricks on how to weaponize your intimidate checks, read The Bullyboy character guide.

The idea behind the Devil’s Own is that the character exaggerates his or her infernal or abyssal heritage to create a persona. The character might, for example, exaggerate his natural claws by painting them black, or by adopting a swept-back hairstyle that showcases his horns. A tiefling could also make constant use of her fire or cold resistances, such as by refusing to dress in deference to winter weather, or by lifting burning coals out of the fire with her bare hands. Wearing armor or clothing that plays into the idea of a follower of dark powers (horned helms, spiked armor, or even dragon hide cured to look like devil skin) can all contribute to a tiefling’s fiendish appearance.

The look and attitude are only part of making this concept work. The rest is the story, specific to each character.

Say, for example, you had a tiefling barbarian. While he rages, this savage warrior’s infernal features exaggerate, turning him into a frenzied mass of muscle, horns, and claws. This doesn’t make him evil, but the sight is frightening to those who don’t recognize it. Perhaps the tales start that the character is a conduit for powers straight from the pit. The people begin to believe he’s a blood-drinking fiend who revels in chaos, and who kills with his bare hands out of some dark need. Rather than trying to refute those rumors, or explaining that his body, for better or worse, is a greater weapon than any sword, he might instead choose to embrace the persona the rumor mill is creating. It makes him a figure who is larger than life, and if tales of his deeds travel, it may mean that his name will cause bandits to step aside, or devil-worshiping cults to bow their heads instead of drawing daggers.

The idea can be spun in a variety of ways, depending on a character’s specialty. A tiefling rogue may use nothing more than darkvision and a superhuman level of stealth, but refuses to deny the rumors that he can simply walk through walls, or appear at the sound of his name. A tiefling conjurer may be capable of summoning any kind of creature to aid her in battle, but she favors infernal creatures because of their power, and because it will boost the rumors that her dominion over the fiends of the pit stems more from her natural authority and lineage than it does her mastery of the arcane.

In order for the Devil’s Own to maintain the facade he or she has created, it’s important to enlist the aid of the rest of the party. For example, the hulking horned swordsman may have a reputation as a black-hearted killer, a slayer of children, and defiler of women. In reality, though, he’s just a simple sellsword who would rather scare his enemies into surrendering so he doesn’t have to kill anyone. To bolster his reputation, the party bard composes ballads that tell the tale of the Dark Rider, who left trails of blood and gore in his wake. The rogue might start whispers in the taverns, warning lowlifes that the last person who double-crossed the Red Woman was fed to a pack of hell hounds in exchange for an infernal favor. Even the paladin could add into the deception, as the good cop to the Devil’s Own’s bad cop (since the paladin knows the tiefling isn’t evil, and may be willing to engage in acts of subterfuge to convince NPCs that the only thing standing between them and the devil-spawn is her protection).

There are risks that follow the Devil’s Own, of course. While a little fear might stop a bar brawl, or back down a mob of townsfolk, truly exaggerated tales might reach the ears of inquisitors and crusaders who will seek out the character to stop their (mostly imaginary) sprees of terror. Rumors of mortal fiends roaming the countryside could also draw the attention of cults dedicated to arch devils, or even greater servants sent as emissaries of hell to recruit the character based on the strength of the stories. So, while the concept is a double-edged sword, it can be a powerful weapon in the hands of the right player.

It should also be noted that, despite the name, the concept can be used by a variety of races. The only true necessity is that there is a noted, cultural fear or prejudice associated with a given race or ethnicity. Half-orcs may find, by exaggerating their brutish appearances and playing to the stereotypical fears of society, that significantly fewer people are willing to raise a hand against them. Dhampirs, by playing to the myths and legends of their vampire forebears, may find that brigands aren’t willing to bet their lives by assaulting a half-dead. Even humans who come from “savage” tribes may find that they are subjects of fear and fascination when adventuring away from their homelands, and that such fears can be exploited as a potent psychological weapon.

2 thoughts on “The Devil’s Own”