Skip to content
Home / Delve into the Depths in the Kobold Blog / Welcome to Midgard: Recent Events in the Blood Kingdom 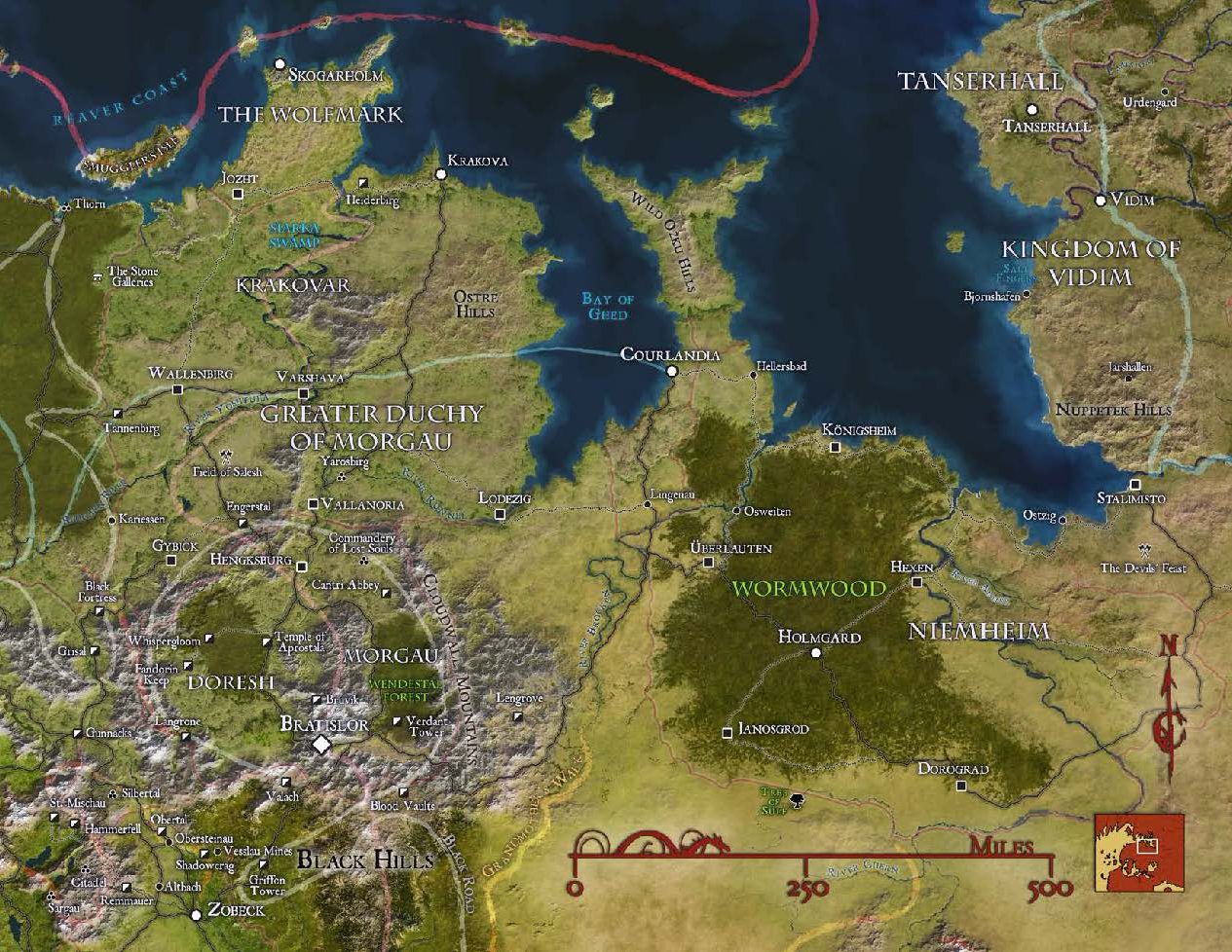 [From the Midgard Worldbook…]

RECENT EVENTS IN THE BLOOD KINGDOM

The recent history of Morgau revolves around Lucan’s embrace of the Red Goddess, his alliance with the darakhul, and his perhaps brilliant, perhaps foolhardy conquest of the Electoral Kingdom to the north.

King Lucan and Emperor Nicoforus the Pale have long maintained a pact of mutual aid between the Principalities of Morgau and Doresh and the Ghoul Imperium below the earth. Neither wishes the other to gain ascendancy, but it serves both kingdoms’ interests to stand together should an army of paladins and priests march against them.

In the last few years, the alliance between the vampires and the ghouls has grown stronger, much to the chagrin of their neighbors. Duke Leander Stross, the Ghoul Imperium’s ambassador to Morgau, was a constant presence at Lucan’s court as detailed negotiations wore on, while the vampires sent the silver-tongued former Countess-in-Exile Urzana Dolingen to the City of White Bone to whisper provocatively in the emperor’s ear.

Eventually a new, closer agreement was forged between the two nations. No one is sure of the exact terms of the alliance, but Guildmaster Orlando of Zobeck’s Arcane Collegium believes that the vampires traded ancient tomes of forbidden lore to the necrophagi of the Ghoul Imperium in exchange for military aid from elite darakhul troops against the Electoral Kingdom of Krakova. Certainly darakhul troops were involved in the siege and slaughter at each Krakovan city as it fell; those who surrendered were spared most of the looting and pillaging, but their cemeteries were despoiled.

Rise of the Blood Sisters

The crimson blood has been flowing freely on Marena’s altars in Morgau for three centuries, and the Red Goddess has been most pleased. However, a few years ago her high priestess, Lileshka of the Chalice, Mother of Lust, began experiencing deeply disturbing visions in which the steady supply of fresh blood started to run dry and the Red Goddess’s power began to fade.

Fearing disaster, Lileshka demanded an audience with then-Prince Lucan and told him Marena yearned for more blood. She urged the First Prince to take up arms against his enemies and conquer new territory in the name of Morgau and the Red Goddess. Now was the time to deal with the treacherous Krakovans along the Principalities’ northern border and let their blood splash onto Marena’s altars. Lucan promised the high priestess he would consider her words carefully and bid her a respectful farewell.

With her visions becoming more vivid and frequent, Lileshka did not want to wait for war to start before taking action, so she summoned the Red Goddess’s other high-ranking priestesses to meet with her at the Temple of Aprostala. She ordered Blood Priestess Sonye of the Spear to ready the mayhem-loving warrior-priests of the Temple of the Scourging Goddess for battle should Prince Lucan decide to go to war. With Mother Abbess Calle she discussed a much subtler plan—members of the Blood Sisters cult would be dispatched from Cantri Abbey and the other temples to seek new converts and spread the Red Goddess’s influence throughout the Crossroads region.

The Blood Sisters have recently founded new secret temples under the guise of brothels in Zobeck and other good-aligned cities, and successfully lured dozens of new worshippers into taking part in the cult’s orgiastic rituals.

With a military alliance secured with the Ghoul Imperium and troubled by Lileshka’s visions, Prince Lucan decided the time was right to strike against the Electoral Kingdom of Krakova and to seize its lands for the glory of Morgau and the Red Goddess.

The vampires had infiltrated the “mice”—the Krakovan spy network—several months earlier, and fed them false intelligence to throw them off guard. Then, just as the Ghost Knights of Morgau, joined by Blood Priestess Sonye’s warrior-priests of Marena and Mavros, attacked Yarosbirg Castle on the border under cover of darkness, a darakhul legion emerged from a tunnel beneath Tannenbirg Castle to the west. Neither fortress could support the other; indeed, they could not defend themselves.

The slaughter that followed was horrific—the ghouls poured out from below the earth in vast numbers, catching the Krakovans completely off guard and massacring them. As the darakhul fed on the dead, the Krakovan survivors fled north in terror. Yarosbirg fell the same night. Its defenders, though brave, were ill-equipped to deal with Ghostrider Templars on flying horses that could phase through castle walls.

In the following weeks, the Ghost Knights pushed north to the city of Varshava, while the darakhul army marched northeast to Wallenbirg. Neither city held out for long. Then, just as King Eynryk was preparing to lead the Order of the Storm Knights from Heiderbirg Castle south to meet the invaders, he was assassinated in his throne room by a vampiric spy. Although the undead killer was swiftly slain, the king’s death was a bitter blow to Krakovan morale. Grand Marshall Jolenta Ludmiska led the army to confront the combined undead forces, but the Krakovan soldiers based on the coast were not used to facing unliving enemies, let alone at night. The armies of Morgau won a convincing victory on the battlefield, and Krakova, City of the Mermaid, surrendered a few days later to the Ghost Knights’ commander, Princess Hristina. Queen Urzula and the other surviving members of the royal family fled into exile.

With the success of the invasion, the newly titled King Lucan wasted no time in declaring Krakovar the third province of the Greater Duchy of Morgau and appointing Princess Hristina as its governor—and granting her the greater title of duchess. But as the priestesses of the Red Goddess moved in to establish new centers of worship, not everything has gone as Lucan wished. Sensing an opportunity, reaver dwarves from Wolfheim sailed across the Nieder Straits and established a beachhead at Skogarholm on the northern peninsula, threatening the city of Jozht and then seizing it for themselves. So far the dwarves have successfully defended the city against all comers and are looking to expand their territory; they have no qualms about recruiting human Krakovans who wish to flee their new rulers. Meanwhile, Queen Urzula seeks to foster resistance to the undead occupation among her former subjects from her exile in Dornig.

With the defeat of the Krakovans, the vampire nobility has grown more bold, even mounting raids beyond the Margreve Forest into distant Perunalia to carry off the beautiful amazon women of that land. One such victim, Dajana Savirne of Clarsaya, 15 years old and already an accomplished archer, has been taken to Hengksburg where she is to be presented to Rodyan, the city’s debauched Lord Mayor, who is always looking for a new wife.

Furious, the paladins of the Order of the White Lions counterattacked in a raid led by Aglaii Soulay, Mistress of the Tower of Clarsaya, but with disastrous consequences. Skirting the eastern edge of the Margreve, the Perunalians marched into the Cloudwall Mountains where they first ran afoul of a hungry mated pair of two-headed rocs, before blundering into a hunt being conducted by a vampire noble and his squadron of Ghost Knights. Few of the White Lions survived, although Aglaii returned alive to Perunalia.

Duchess Vasilka has ordered the border around the Margreve strengthened with additional patrols of elite archers, paladins, and priests of Perun to prevent further vampire raids…