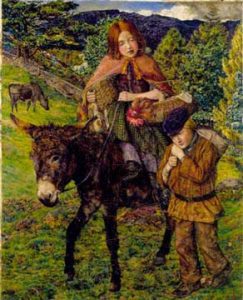 The cart of the elfmarked peddler Rasmus Pulling is well-recognized across the Grand Duchy, and welcome in just about every village or city he and his clan visit. Adorned in splashes of starburst flower designs of yellow, red, orange, purple, and green, the lead cart is easily spotted from afar, which gives folk time to rush back to their homes and retrieve their purses.

The business of Rasmus Pulling is more than this single cart, actually. He operates an entire caravan of carts laden with a variety of goods, each one maintained by members of his immediate and extended family. And though the operation trundles along, never spending more than two days in a place, it traverses much of the duchy in a single year, a circuit that starts in Reywald and circles around to most of the major cities before ending up in the River Court, where it receives a fey escort back to Reywald.

For protection, Rasmus hires guards that he has chosen first for their loyalty and only secondly for their skill at arms. But it is a robust group, visible and recognizable in their orange tabards emblazoned with a white wagon wheel on the breast, an ample deterrent to most thieves.

One business of Rasmus goes unadvertised. While he makes his bones on the sale of mundane—yet good quality—goods to the common folk, the undecorated (and iron-locked) supply cart in the center of the caravan holds genuine treasures. Practitioners of arcana seek Rasmus out if they are on the lookout for the unusual, mystical, and rare.

You never know what Rasmus might be carrying. But the following selection is in his collection at the moment. (The list includes items from or inspired by the fifth edition Dungeon Master’s Guide, but can be used in just about any game).