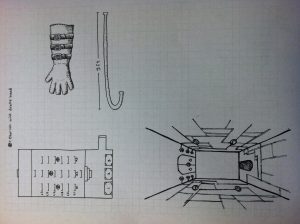 Puzzles, traps, and hazards are a common occurrence in deadly dungeons. You might find that it can be quite time-consuming and challenging to come up with these events on the fly. In this series, you’ll find three fire-themed dungeon dangers ripe for plunder. You can find Part 1 here.

When you enter the room, you are greeted with the sounds of snapping jaws and a continuous grinding of scales. A long pit dividing the room swarms with dozens of glowing hot drakes. Also, within the pit are three obsidian obelisks covered in runes. Each has matching drake heads carved into its top.

The pit is 40 ft. x 35 ft. and stretches the width of the room, barring passage. Above the pit are three rows of six ‘U’-shaped pipes that are embedded in the smooth stone ceiling. On the side of room through which the characters enter are three wooden chests, closed but not locked. The walls and ceiling of this room have been magically polished smooth, inhibiting physical climbing.

Chest 3: Contains five pairs of extra-thick leather gloves that can be tightened around the forearm by three belt straps.

The ceiling pipes are scalding hot and cause 1d10 + 5 damage unless touched by metal. To cross, the players must strap the long iron rods to the leather gloves and used them to hook the ‘U’-shaped pipes in the ceiling. Three of the pipes are trapped: R1L2, R2L3, and R3L5. The row 1 and 3 pipes are unhinged on one end and attempts to use them drop a character into the swarm below; make a +5 vs. Reflex attack. If the character is missed, he or she can move to an adjacent pipe before it moves. Failure causes the character to slide to the end of the rod where his or her hook catches, dangling the character’s feet within reach of the drakes and causing 2d8 + 5 damage before he or she can move to safety. The trap in row 2 pulls down slightly when it is hooked and causes the obelisk to spew fire; +7 vs. AC, with 1d8 + 5 fire damage on hit.

The lubricating oil is a trick and induces an automatic failure on the unhinged pipes in rows 1 and 3 if rubbed on the iron hooks.

Note: If a drake is attacked, it is destroyed and is replaced by another drake, magically conjured by the obelisk.

You enter a small room with strange brass piping covering the walls and ceiling. Worked into the system are four large serpent heads. There is a door ornately molded to depict hundreds of coiling snakes and drakes. At the center of the door is a large keyhole. The piping from around the room culminates with six valves, three on either side of the door.

Perception DC 14—The door is locked and does not appear to be trapped.

Perception DC 23—A success reveals that the doors are an activating mechanism of some kind. Failure reveals only that they appear to be connected to the piping in the room and are not trapped.

Perception DC 28—The lock appears to have a separate function beyond barring the door.

Thievery DC 15 (keyhole)—The lock is successfully opened, thus releasing the flow within the pipes and activating the serpent heads.

Trigger—If the lock is opened, then a barrage of magical snake-shaped cinders bursts from the four brass serpent mouths. Each head makes an attack every round until the lock is closed or the trap disabled.

Target: All creatures in blast

Effect: When the cinder snakes hit any object, they disintegrate.

Another Thievery check (DC 15) can be made to close the lock and stop the attacks, or the brass serpent heads can be disabled with a DC 25 Athletics or Arcana check. The door easily unlocks by opening all six valves.

Frank Tedeschi is a Cleveland-based DM, blogger, aspiring freelance writer, musician, and Biochemist. RPGs have played a strong role in his life for many years, and his recent DMing experience has driven him to start a Dungeon Master focused blog at DnDIY.wordpress.com. He has contributed to several Open Design projects including the Midgard Campaign Setting and the 4th Edition Midgard Bestiary.

2 thoughts on “Puzzles and Pitfalls (Part 2)”