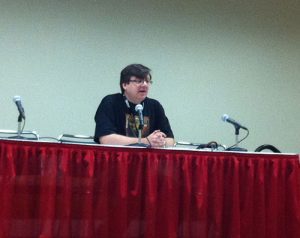 On Thursday, August 16, 2012, Gen Con attendees who sought to learn how to create better adventures had a chance to listen and interact with panelist and Kobold-in-Chief Wolfgang Baur. Because we know not everyone could make this seminar, we’re providing a few of the highlights of the advice here.

First of all, when you’re working on the beginning of the adventure, avoid overcomplicating it, and keep your hooks simple. To avoid boring hooks, you should write five or more of them. By that fifth hook, you should be working to reach for more interesting and engaging ideas.

You should keep a few other things in mind as you work on your adventure. First, think about the next adventure when you’re in the current one. You can plant the seeds of your next adventure early and scatter them, which will allow your adventures to flow seamlessly. Next, adventure design also depends on being more obvious than you think you should be. You don’t want to lose your players by providing subtle clues that they never discover; getting stuck due to bad die rolls can bring your adventure to a grinding halt. Also, as you formulate your adventure, plan for nudges. To keep the energy level at the table high, think of five things that support your adventure directly and ten random things, then use them as needed to keep your players focused on the game.

When it comes time to write your adventure finale, make sure you plan out your Hollywood twist in advance. You don’t want to lose your players because your adventure lacks the structure needed to make that twist work. Additionally, if you have something in the adventure that you want the players to know about, reveal it now. You certainly don’t want to forget to show them all the work you put into your adventure’s story-oriented elements.

A question from the audience about how to keep long adventures interesting allowed Wolfgang to make a few suggestions. First of all, make sure you have a goal. Where do 1st-level characters end up? What sorts of enemies will the characters be facing? Work out a progression of danger in terms of monster power (from mooks to big baddies). You can also keep players interested by changing up the tone of the adventure from time to time. Using side quests can accomplish this goal. Another thing you should do is make sure to put your good stuff up front to get the players hooked, then try to top that. The challenge involved in following this advice can allow you to create more interesting adventures.

The topic of lethality came up during this seminar, too. When you think about adventures such as the Tomb of Horrors, do you like the lethality involved there? Is the GM and are the players on the same page on this question? Find out before you start designing your adventure. Additionally, what other things can you do to engage characters aside from using the fear of death to motivate them? Consider taking away something that a character (or the group) cares about. Perhaps appeal to pride.

Some general tips include the following:

Many thanks go to those who attended this seminar and provided their suggestions and questions to Wolfgang!