Skip to content
Home / Delve into the Depths in the Kobold Blog / Midgard Expanded: The Travels of Lucano Volpe, or the Province of Hariz and the City of Tabur 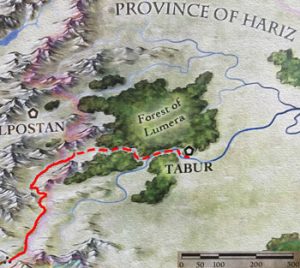 Let us pause a moment and speak on the decision to leave for the East via the city of Tabur. There are some who would advise a traveler to depart instead from the fortress city of Sarkland in the Gizmiri province. This advice is the height of folly. Though it is true that the Campaign Trail does stretch to the East from Sarkland, that road wanders through endless fields of the empire’s past battles with Beldestan. For hundreds of miles, the route is so infested with bandits, undead soldiers haunting their deathbeds, and other fell beasts that few caravans arrive unscathed. This is the reason why most silk trade is conducted upon the sea. Now, however, let us turn our attention to Tabur.

Regarding Hariz and the Lumera Ferry

The fact is that the whole of the Province of Hariz is a somewhat poor and backward place. Far from the wonders of the rest of the empire, the open plains and pockets of dense forest of Hariz have only scattered settlements. Long past are the comfortable hostels and inns of Betik. Here, the wandering bands of centaurs, gnolls, and rough humans can be depended upon to act in their best interest only, whether that be to trade with a traveler or come howling out of the tall grass with murder their goal.

A rough and unkempt road runs some 300 miles from the ruins of Ahnni to the headwaters of the Lumera River. Here might be found a small bastion of civilization in the form of a ferry station. The Morza of Hariz, Lashmaraq Talshah established the conveyance to usher trade and travelers over the 250-mile stretch of river from the trade road to her capital of Tabur. Our papers were given a great deal of scrutiny by the ferry master, and many questions were asked regarding our purpose in Hariz. This suspicion pervades this entire province, and many times, both myself and my servant Agosto were halted and questioned by guardsmen and officials alike.

The ferry itself, I shall describe. A wondrous craft of polished wood and bone, it holds a dozen men and horses as well as stacks of cargo. The river winds through the towering trees of the Forest of Lumera. The boatmen, humans, like myself, since the dragonkin do not lower themselves to be rowers, confided in me that the Morza built the ferry so that travelers would not venture close to her hoard, which is hidden somewhere in the forest.

On the City of Tabur

Tabur is the only settlement of any size in the whole Province of Hariz. Perched on a strip of land between the river and the edge of the Lumera Forest, the city is surrounded by small farms, and herdlands dotted by odd circular tents called yurts. The fact is that the inhabitants of Tabur live by trade and war in equal measure. When they are not training for battle under the watchful eyes of the Morza’s officers, they buy and sell to the caravans and traders who dare to cross into Beldestan, Khandiria and points East. The city is so favorably situated that merchandise is brought here from distant Sikkim and Cathay. Traveling merchants make great profits in this city.

I will tell you of a great wonder that may be found in Tabur. Within the walls of the city is a holy monastery dedicated to Azuran called the House of the Blessed Scale. The monks in that place do honor to their faith by constantly weaving belts or girdles from the hair or garments of those they have defeated in battle. Subjected certain magical prayers and rare oils, these girdles are greatly prized, for anyone who suffers from bodily pains may find relief just by wearing one. 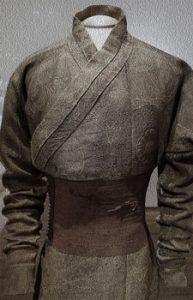 Belt of the Blessed Scale

Woven from a mixture of hair and cloth, this narrow belt has been embroidered with draconic prayers. The wearer of a belt of the blessed scale can, as a standard action, cast a cure moderate wounds spell upon himself. The belt can only hold one healing charge at a time and must be recharged to be used again (see below).

In order for the belt to regain its healing charge, it must be touched to the unconscious or slain body of a foe the wielder had a hand in defeating. This is a full round action. For the purposes of this item, an opponent defeated by one of the wearer’s companions counts as a “defeated foe.”

3 thoughts on “Midgard Expanded: The Travels of Lucano Volpe, or the Province of Hariz and the City of Tabur”