Skip to content
Home / Delve into the Depths in the Kobold Blog / Out of the Frying Pan: Loyalty Beyond Death 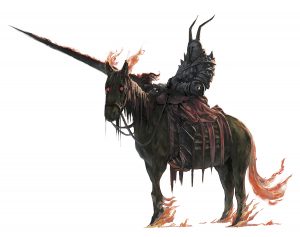 Encounter 1: A Knight to Remember

You never know what to expect while traveling overland or exploring a dungeon, least of all an undead Magdar knight. The forgetful, quixotic, and skeletal Sir Revilar has been wandering Midgard for nearly a decade—after half a century of entombment—trying to find his way back to his fellows in the Order of the Undying Sun in the city of Wagenstein. Rumors of a skeleton knight-errant wandering across the countryside have spread across the Crossroads, foreshadowing his appearance or giving inquisitive PCs a reason to seek him out.

What is the thing before you? From this distance, it looks human from its stature: bipedal and about six feet tall. It wears a full suit of expensive, knightly armor, but it is pitted and rusty, and the mail coif beneath its helmet conceals its face. Its gait is awkward, like it is limping with both legs. It is mumbling something quietly to itself, looking back and forth into the near distance.

A DC 10 Wisdom (Perception) check allows a character to make out Sir Revilar’s mumbling (“I say, this turn wasn’t quite right. Perhaps, I ought to have taken the left at Juralt…”), while a DC 10 Wisdom (Insight) check reveals from his body language that this figure is completely lost. If surprised or startled, Revilar reacts with great rattling of his bones and sabre (“What ho, a foe? Stand down, rapscallions, lest you taste the bite of my blade!”).

If attacked, Rovilar attacks in turn. He does not kill his opponents, believing himself far too honorable to do so. If given respect, the knight stands down and sheepishly asks for directions to Wagenstein, seat of the Order of the Undying Sun. He must return, so he may attend to the front lines and put an end to “those damnable centaurs,” a people the Magdar Kingdoms have been allied with for decades.

Another combat encounter may occur at the same time as this meeting to force the PCs and Revilar to work together. Sir Revilar uses ghost knight statistics (Tome of Beasts), though the lawful neutral skeleton uses only his sabre for combat (+6 to hit, 1d8 slashing + 3d6 necrotic).

Roving monsters are a perfect nemesis for a knight-errant. Sometime after the PCs’ chance encounter with Sir Revilar has faded out of memory, they hear a shout of “Unhand me, monstrosities, or I swear by my holy oath I shall rip off your arms one-by-one until they stop regenerating!”

Revilar’s body is in a heap on the ground, and his skull is being thrown back and forth between a pair of warty trolls like a crude game of volleyball, while a crowd of five ogres cheer their monstrous leaders on. A pile of torn-off troll arms surround the combatants. Three humans are tied up in the back of the ogre camp, prisoners from a raid on the nearby village of Hammerhead.

Developments. The prisoners are rightly confused and terrified of Sir Revilar and his skeleton grin, and they are hesitant to allow him to escort them back to Hammerhead. Revilar, having no sense of direction, continues wandering after this encounter unless the PCs choose to join him. Proceed to Encounter 3.

The next time the PCs encounter Revilar—or if they are escorting him home when they near the city of Wagenstein—they are set upon by Knights of the Undying Sun, Revilar’s order. Eight knights have surrounded the skeleton knight, four of them humans on warhorses, and four centaurs. Revilar attacked the centaurs—being about sixty years removed from current alliances—claiming that they were imposters and should be jailed for impersonating true Magdar knights.

Developments. Clearing up the misunderstanding convinces the Undying Sun knights to cautiously take Revilar into their custody and bring him back to Madgar. If the PCs join in Revilar’s attack, one of the centaurs flees to warn Magdar of the undead abomination posing as one of their knights.

4 thoughts on “Out of the Frying Pan: Loyalty Beyond Death”