Skip to content
Home / Delve into the Depths in the Kobold Blog / From Diablo 3 to D&D: Traps with a Twist (Part 1) 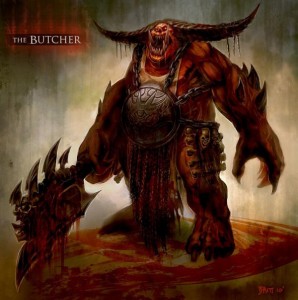 This week, we have the first part of a two-part article from Jerry that explores Diablo’s traps, which might make a few GMs out there happy. Players should take heed, though: Sometimes your characters can take advantage of traps, too!

Traps are pretty common in a lot of D&D campaigns, especially those that are dungeon-centric. With a game such as Diablo, the entirety of the game could almost be considered a dungeon—they don’t call these games “dungeon crawlers” for nothing. Granted we could strike up a debate about what constitutes a dungeon, but we won’t go there today, or ever, so let’s just discuss their traps!

When you think of traps, what are the first things that come to mind? Pits of spikes, gouts of flame, whirling blades, and rooms filling with deadly gas, no doubt. Perhaps a chest or piece of treasure that seems all too ripe for the taking? Well, one of Diablo 3’s biggest strengths and weaknesses is that the game doesn’t deviate from that formula very much. Chances are it’s not really reinventing the wheel here, but the game’s nuances do have quite a bit more flourish than most.

In this article, we’ll be exploring the ideas of Diablo-esque traps inspired by the lord of hell himself. The theme here is that all these traps can inflict harm not only to the PCs, but also the dungeon denizens themselves too. All too often traps are looked at as maniacal “the GM hates us” meta-game pieces, but I’d like to change that. If we look at traps as something organic, they can backfire, work in favor of more than one party, or work for no one. A lot of that depends on how the GM uses them and how crafty the players are when playing their characters.

Let’s take the first trap I mentioned, which is probably most well-known trap around: spikes. In the game, we see rolling, spike-riddled logs that can skewer your character, but alert PCs could trigger these traps to work against any foes that they meet within the area.

In another trap, a single chain dangles from under a bed of spikes that hangs over a fire-spewing furnace in the dungeon floor. From this furnace, burned and undead abominations crawl out to attack those in the area. In the game, you can dispatch the creatures as long as you like, but until the chain above is broken, which seals the furnace, these creatures will just keep coming. Placement of these traps in a tabletop game could provide GMs with some interesting ways to use critters to attack PCs—or could allow quick-thinking PCs to use the spiked bed above to handle a few of these incoming foes. Using other hazards that push PCs around might cause a few problems with any plan that involves that crushing spiked bed, though. In other words, GMs should be devious while still allowing the players to have some fun with these elements. (And, well, if you want to add a creature like the Butcher to the area and have it do your pushing around for you, that’s your call.)

These traps are very thematic, yes, but you could use them just about anywhere in a D&D dungeon, and you could also change the flavor up. The flames of the furnace could be shadows or water, and the spikes could be conical seashells, wraith tendrils, or even a sphere of annihilation. Go wild!

Another classic trap would be a lone treasure chest that is just waiting to be opened or an artifact that is displayed (temptingly, of course) on a weighted pillar. Diablo’s spin on some of these things is quite cool. Let’s tackle the resplendent chest traps first: As you walk toward this glowing chest of solid gold, if you choose to touch it, it swivels below the surface of the floor. As this happens, several spires of twisted skeletal remains jut upward from the floor and serve to summon monsters and fire volleys of magic at the party. This trap provides an advantageous dungeon environment for the monsters but it might also provide some opportunities for cover and terrain manipulation for your players. Bouncing the magical projectiles back on to foes and smashing the skeletal pillars in a burst of splintered bone that wound enemies are just two possibilities.

Gargoyles and animated statues are another trope here, but what about a copse of trees that lurches toward adventurers to spawn pods that burst with poisonous gas? Or a pool of shallow water that appears to be full of debris but that is actually teeming with electric eels and exploding corpses just below its surface? All these serve as good examples of traps that can be triggered to harm friends or foes, which can provide you with some player-engaging options and take a step away from finger-pricking needle traps or “these flames shoot only at adventurers” traps that you might have seen in a lot of dungeon crawls.

Now here’s one trap that’s obvious, but not always done: stuff. Yeah, that’s right. All kinds of stuff: chandeliers, unfinished or crumbling walls braced up with wooden planks, rocks, water towers—the list goes on! You can find great possibility in mundane objects and debris that wait precariously, rigged to kill unsuspecting denizens and PCs alike. The great part about these “traps” are that they aren’t always obvious, and they rely on being triggered by the most resourceful and the quickest of combatants—whether it’s the PCs pulling a lever to crash a chandelier down onto a baddie’s head or the mischievous goblin poised to ride that chandelier all the way down onto a dungeoneer’s skull.