Skip to content
Home / Delve into the Depths in the Kobold Blog / Monday Monster: Tar Baby 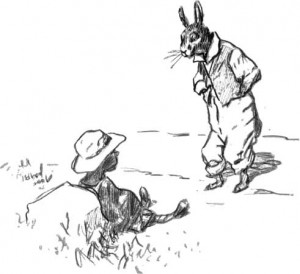 Once, there was a long drought. All the creeks and springs dried up. The leaves on the trees turned brown and brittle. The animals were very thirsty.

Faced with a common problem, all the animals gathered to figure out a solution. After much discussion, they decided that what they needed was a well. All the animals agreed to help dig the well. All, that is, except Rabbit, who had never worked before and didn’t intend to start now. The other animals told Rabbit that if he didn’t contribute, he couldn’t drink from the well. Rabbit replied that he got enough water from drinking the morning dew…

So the well was dug, and though the drought continued, the animals flourished, even Rabbit. However, the other animals grew suspicious of Rabbit. Some whispered that he was sneaking water from the well when no one was looking. To reveal the truth, the other animals decided to lay a trap for Rabbit.

They gathered pine tar and molded it into the shape of a wolf. Then, they staked the tar wolf next to the well. That night, Rabbit—thirsty from a day of frolicking—went to get a drink. When he saw the wolf guarding the well, Rabbit stopped in his tracks, but when the wolf did not react, Rabbit’s fear turned to curiosity. He called out to the wolf, but the tar wolf did not answer. Rabbit approached and called out again, but the tar wolf did not answer. Rabbit walked right up to the black wolf and said, “If you don’t get out of my way, I’ll hit you!”

The tar wolf did not answer. So Rabbit hit him, and his paw got stuck in the tar.

“Let me go,” he yelled, “Or I’ll hit you again!” Rabbit punched the tar wolf with his other paw, which naturally became stuck as well. Rabbit kicked at the wolf to free his paws, but he only succeeded in getting his feet stuck in the tar as well. Exasperated, Rabbit headbutted the wolf, and quick as that, he became enveloped entirely in tar.

This is how the other animals found him the next morning.

Resembling a black ooze, a tar baby is actually a construct made from pine tar diluted with turpentine. The viscous fluid is malleable, allowing the tar baby’s creator to mold it into the shape of an animal or person (often adding light clothing to complete the disguise). The animating magic allows the tar baby to retain both its shape and viscosity far longer than mundane tar. A tar baby’s lack of intelligence is also its strength, though, for once assigned to guard an area, a tar baby does not leave nor get distracted. The adhesive construct serves to dissuade or entrap intruders, especially those who prefer to strike first and ask questions later.

Before Combat Disguised as a guard person or animal, a tar baby rarely moves from where it sits. It does not react to speech or other noise, and initiates attack only when an intruder comes within reach.
During Combat A tar baby lashes out instinctively, focusing its attacks on the first creature it successfully grapples. The tar baby changes targets only when that creature escapes or falls unconscious.
Morale A tar baby never retreats, but it rarely gives chase.

Shapeable (Ex) A tar baby can alter its shape to match the silhouette of a creature its own size (typically a humanoid or animal). This provides a +10 circumstance bonus on Disguise checks to the tar baby or a character disguising the construct.

Sticky (Ex) If the tar baby is hit with a melee weapon (even if the damage is prevented), it may make a disarm attempt as a free action that does not provoke an attack of opportunity. If successful, the weapon adheres to the tar baby. It can be dislodged with a successful disarm.

If the attack is from an unarmed attack or natural weapon, the tar baby makes a grapple attempt instead as a free action that does not provoke an attack of opportunity. No initial touch attack is required.

A tar baby receives a +4 racial bonus on disarm and grapple checks.

Don’t forget! All King of the Monster Contest entries must be received by tomorrow (Tuesday) at 12 noon (PST) to be eligible.

Rabbit, of course, will forget to send his in. Don’t be like Rabbit.