Skip to content
Home / Delve into the Depths in the Kobold Blog / To the Birds: Variant Tengu (Part 1 of 4) 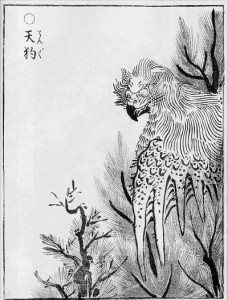 Naro wrenched his blade from the still warm corpse of the tengu assassin. Strangely, the ambassador did not seem to be pleased.

“What seems to be troubling you ambassador?” Naro bowed, inwardly smirking at the man’s discomfort at the sight of so much blood.

Naro took a step backwards, dumbfounded. “The wrong tengu… you must be mistaken ambassador.”

“I think not fool. The tengu assassin hired to kill me possesses the head of a black raven. You just killed the court librarian.”

Naro swallowed loudly and looked down at the corpse of the tengu.

It had the head of a crane.

This humanoid creature has the long neck and head of a white crane with gleaming inquisitive eyes.

The scholars and mystics of tengu society, crane tengu dwell in areas such as abandoned temples, ruined monasteries and dilapidated libraries. Like other tengu, they are covetous creatures; however, they do not share their cousins’ love of shiny objects. Instead, crane tengu hoard books, tomes, palimpsests, and any other written material they can get their hands on, greedily absorbing the knowledge contained in these texts, both to expand their own knowledge and to pass on the information to other tengu. As a result, many crow and seagull tengu rookeries contain a few crane tengu acting as spiritual guides and teachers.

Most crane tengu are experts or wizards but some become clerics, druids, or monks. Crane tengu have the following racial traits.

+2 Intelligence, +2 Wisdom, −2 Constitution: Crane tengu are frail, thin-limbed creatures, but they are patient and shrewd.

Staffmaster: Crane tengu are not especially gifted in swordplay, instead favoring stout quarterstaffs to defend themselves. As a result, crane tengu receive a +1 racial bonus on attack rolls and damage rolls with quarterstaffs.

Languages: Crane tengu begin play speaking Common and their own dialect of Tengu. Crane tengu with high Intelligence scores can choose any language as a bonus language.

The head of this strutting humanoid is that of a rooster with golden feathers, piercing black eyes, and a bright crimson cockscomb.

The entertainers and minstrels of tengu society, rooster or cockerel tengu are also the vainest members of their race, and they constantly groom and preen themselves to maintain their glorious feathers and wattles. Unlike other tengu, rooster tengu are exclusively male, and they either live alone or with a group of female crow tengu who serve them as both guards and concubines.

Rooster tengu are possibly the most notorious of the common tengu variants, and their boastful and lascivious nature often results in clashes with enraged husbands, spurned lovers, and the legal system. Some rooster tengu make their name as talented singers and troubadours, and some as many are noted bandits and thieves.

Rooster tengu are amongst the most attractive looking tengu (as far as their race is concerned) with broad chests, magnificent cockscombs, and feathers in a variety of brilliant shades including gold, blue, and red. They tend to accentuate their gloriously colored feathers with fine clothing and jewels.

Most rooster tengu are bards or fighters with the most famous being high-level duelists. Rooster tengu possess the following racial traits.

Languages: Rooster tengu begin play speaking Common and their own dialect of Tengu. Rooster tengu with high Intelligence scores can choose any language as a bonus language.

This raucous humanoid possesses the head of a seagull with a bright orange beak and darting black eyes.

Common along coastlines and waterfront cities, seagull tengu favor locations such as ships that have been tied up and left abandoned or old fish markets. Loud and abrasive, rookeries of seagull tengu often compete with one another for space and territory, leading to secretive wars in the back alleys and dock areas of major cities. These wars often lead to a decrease in the level of crime in major cities as the tengu fight amongst themselves, but as soon as the war is over, the victors make up for lost time. While most seagull tengu are found in cities, some dwell in isolated locations far from human civilization, living off the sea as simple fishermen.

Seagull tengu are amongst the shortest members of their race, and possess the heads of seagulls rather than ravens. Most seagull tengu have white or gray heads with yellow or orange beaks although variations exist, and some even have the heads of other seagoing birds such as terns and cormorants.

Seagull tengu are natural kleptomaniacs, so they favor the rogue class. A rare few seagull tengu who come from isolated rookeries are barbarians instead. All seagull tengu have the following racial traits.

+2 Dexterity, +2 Wisdom, −2 Charisma: Seagull tengu are known for their quick reflexes and natural inquisitiveness, but are annoying and bothersome at the best of times.

Flock Mentality: Seagull tengu gain a +1 racial bonus on attack rolls when flanking an opponent. This racial bonus increases to +2 if at least two other creatures are flanking the same enemy.

Languages: Seagull tengu begin play speaking Common and their own dialect of Tengu. Seagull tengu with high Intelligence scores can choose any language as a bonus language (though they are not as gifted in languages as other tengu, and many are illiterate).

Aside from the variant tengu already mentioned, other types of tengu are also known to exist, some of them far more powerful and malevolent than those listed above.

Birdmen Tengu: Dwelling in isolated mountaintop retreats, birdmen tengu possess large wings that enable them to fly with a base speed of 60 ft. (good). Birdmen tengu are more fragile than their land-bound kin and receive a −2 racial penalty to Strength in addition to their normal racial traits. Birdmen tengu are flighty and impulsive. Most are chaotic in alignment.

Karasa Tengu: Vicious and evil tengu with a penchant for human flesh, karasa or daitengu are crow-headed tengu with the giant simple template, two claw attacks that deal 1d6 damage each, and the ability to fly with a base speed of 40 ft. (average). Karasa tengu are brutish creatures but far from stupid. They have been known to control gangs of lesser crow tengu through fear and intimidation.

Konoha Tengu: Powerful tengu with blazing eyes and long hair (usually worn loose and long by males and woven into intricate styles by females), konoha tengu are tengu with the advanced simple template and the ability to use disguise self and obscuring mist as spell-like abilities 1/day. While konoha tengu are often the leaders of normal tengu rookeries, just as many work as lone spies or assassins, using their talents to infiltrate all avenues of society.

Oni Tengu: Some oni take the form of tengu instead of giants, corrupting tengu rookeries and transforming them into evil havens. Oni tengu have the heads of crows or other birds like normal tengu, but they also possess a single monstrous feature that marks them as slightly different, such as large donkey-like ears or canine fangs. Oni tengu are treated as ogre mages with the young creature template.