Skip to content
Home / Delve into the Depths in the Kobold Blog / Familiar Roles: Practical Ideas for Animal Familiars (Part 1 of 2) 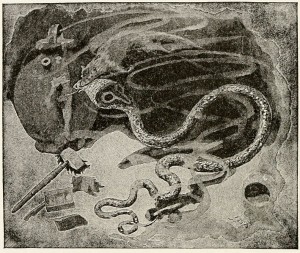 Lennox rose lazily in his small apartment: his first real sleep in days. He slept better here than he did in his company’s last dungeon delve. He yawned and stretched and splashed his face with cold water from a basin to revive himself. Squinting through the shuttered windows, he saw it was late afternoon.

He proceeded to wash himself and comb his hair. His owl familiar, perched in her usual place, was preening her feathers. Lennox and Shila often found themselves engaged in the same activities. She had picked up his mannerisms, and he had found himself sleeping more in the daytime and staying up all night. After feeding her some rabbit, he pulled on clean clothes, held out his gloved hand for Shila, and locked the door behind them…

Familiars are great! An animal familiar is an intelligent, magically endowed companion as meaningful as any cohort or fellow adventurer. Every familiar receives special abilities and imparts special abilities to her master. They can scout, deliver messages, use the master’s skill ranks, and even aid another or fight when necessary. What follows are some ways to make your animal familiar more useful, more fun, and more like a real NPC!

PCs have traits that add flavor and small useful bonuses. Why not familiars? Familiars receive one of the following familiar traits.

Charismatic Spirit: Your familiar is very charismatic. Instead of rising in Intelligence as you go up in level, her Charisma increases at the same rate. Intelligence remains steady at 6. This must be chosen when first selecting your familiar.

Dodgy: Your familiar senses danger readily and is adept at avoiding attacks. Add a +1 dodge bonus to its AC.

Fleet Familiar: Whether crawling, flying, or swimming, your familiar is faster than average. Its primary movement rate increases by 10 feet.

Gifted: Stronger, smarter, or abler, your familiar is extraordinary. Add +2 to one ability score.

Handy: Whether by mouth or paw or serpentine tail, your familiar is able to handle tiny objects with ease. It can manage any reasonable activity requiring a hand (such as striking a tinder twig or opening a lock with a key). With GM approval, Craft skills can be accomplished. A mouse can sew clothes, a viper can hold a pen with its tail and write calligraphy, a rat can cook lunch, etc.

Muse: The Powers That Be bestowed an inspiring spirit within your familiar. Pick one skill, and add +2 to your skill checks whenever the familiar is within arm’s reach.

Talented: Your familiar has a particular affinity for a certain skill. Pick any skill, and give it a +2 enhancement bonus.

Thick Skinned: A tougher hide protects your familiar. Add +1 to its natural armor.

Tough: Your familiar is blessed with a hardy physique. Add +1 hp for per character level of yours.

Wand Wielder: Your familiar has Use Magic Device as a class skill. Prehensile hands (such as a monkey) or the Handy trait may be required for some devices like wands. You must have ranks in Use Magic Device. As usual, use your ranks but with familiar’s ability bonus.

Through an elaborate ritual requiring the fresh blood of a magical beast, your familiar gains a protective ward.
Benefit:
This feat adds a +2 armor bonus to the familiar’s AC. It also adds a DR 1/magic for every 4 character levels of yours.

You have an exceptionally gifted familiar.
Benefit:
Your familiar gains two additional traits.

Your animal familiar’s special abilities are advanced.
Benefit:
Your level is considered +1 for determining familiar bonuses like natural armor adjustment, Intelligence, and special abilities. For instance, a 10th level sorcerer’s familiar considers his bonded partner as if he were 11th level. The familiar would have a +6 natural armor, an 11 Intelligence, and spell resistance.

To really bring your familiar “to life,” consider your familiar’s habits and lifestyle. This is an intelligent being in animal form. What does she eat? Where does she sleep? What does she like to do when she’s not adventuring? Does she have any particular interests (favorite skills, collections, habits, attire, etc.)? What are her attitudes toward your other companions? Chapter 4 of the Game Mastery Guide has some helpful suggestions for NPC development. Study up on whatever you can find on NPC creation… but with your familiar in mind.

In Part 2, death is not the end, and what to do with a headless chicken…