Skip to content
Home / Delve into the Depths in the Kobold Blog / Howling Tower: Black Powder—Friend or Foe? 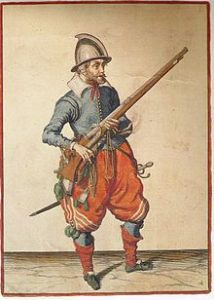 In this golden age when we have dozens of well-designed, polished FRPGs to choose from, gamer arguments tend to be about whether game A is “better” in some indefinable fashion than games B through Z. There was a time long ago when only a handful of FRPGs existed, and most roleplayers had tried all of them to one extent or another. Then, arguments tended to be about what you did or didn’t allow in your campaign. One of the most contentious campaign elements was gunpowder. If two gamers collided in a hallway, you could count on a “you got gunpowder in my magic/you got magic in my gunpowder” fight breaking out.

I could be wrong, but it seems to me that gamers are more open-minded about thematic elements now than they used to be. Maybe it’s because modern approaches to game design are better at handling things like gunpowder; maybe it’s because after almost forty years, people are willing to push the envelope more; maybe it’s because genre mashups in general are popular now.

The question of whether to allow gunpowder in your campaign is still valid. Gunpowder’s presence or absence has a big effect on the tone of the setting.

One approach to firearms treats them as alchemy or some similar branch of magic. Firearms and magic wands exist in harmony. If that’s your preference, then firearms are easy to mix into the campaign. For example, firearms are integral to Warhammer Fantasy Roleplay. The Old World wouldn’t be the same without them. Pathfinder offers the gunslinger, which the GM can easily drop in or keep out of Golarion to taste.

There’s another approach that bears considering. It has a big impact on the world, because it casts firearms as symbols of a conflict between two competing world orders: the arcane mystery of magic opposed by the machinery of science. What would such a campaign look like?

Here are ideas that can be baked into a campaign built around the idea of gunpowder as the harbinger of things to come. Not all of them are necessary; they can be mixed and matched as desired. Many of them can be used equally well in campaigns where gunpowder and magic aren’t in conflict. I have a strong historical bent, so many of these ideas are inspired by the early days of gunpowder use in the Middle Ages and Renaissance.

Gunpowder is complex and mysterious. Gunpowder’s ingredients might be well known, but the formula for mixing them is closely held by a handful of secretive guilds. The same goes for the secrets of metallurgy involved in making guns. The more complex gunpowder is to manufacture and use, the more specialized (and secretive) its makers and users will be. In a world with a long history of magic, the newcomer gunpowder might actually be the more mysterious and more feared of the two.

The ingredients are hard to obtain. Charcoal is easy to come by, though some types of wood are better than others when making charcoal for gunpowder. The best sources for sulfur and nitrates, however, might be far away, in areas controlled by unfriendly humanoids or prowled by monsters, or under watch by forces that are opposed to the spread of gunpowder.

Firearms are powerful but can’t stand alone. I’m definitely going to reveal my bias here. Firearms should be thought of as similar to encounter powers in D&D 4E. Once a gun is discharged, you’re not going to reload it in the midst of a skirmish. If you want to stand in the back row and shoot over and over, a bow is the tool for you. That handgun in your belt will stop one weak enemy in its tracks or severely wound one powerful foe, but then you’re going to drop it or stuff it back into your sash and draw your sword. Or, you might wade in with blades and keep the handgun in reserve to get yourself out of a tight spot.

Firearms have effects beyond wounding. Arrows, bolts, javelins, and daggers can put holes in your enemies. Gunpowder weapons can do more. The noise and smoke frighten animals and even intelligent creatures that aren’t accustomed to them. Press your pistol right against your enemy and there’s a good chance the discharge will burn him and set his clothes on fire, too. The concussion from an explosion can stun nearby targets or knock them down. Set out a pot of low-grade gunpowder and it will pump out clouds of blinding smoke when it burns.

Firearms can be scaled up. The weapon that’s likely to see the most use by adventurers is the handgun, but there are plenty of others to choose from: long guns with range that rivals that of the best bows; two-man guns that hit amazingly hard; heavy guns that work best when mounted on fortification walls, or when used against them, such as to pound a wizard’s tower into rubble.

What type of campaign is best for this type of gunpowder? My favorite concept is a downfall-of-magic scenario, in which the world is ruled by a cadre of powerful, jealous wizards, largely for their own benefit. The downtrodden masses have a new weapon in their arsenal—serpentine, the burning powder. With it, they might have the power to bring down the corrupt structure of the ruling wizards and usher the world into a new age of science and reason.

One final note: if you allow gunpowder in your games, it’s best to keep a tight rein on the PCs’ inventiveness lest they quickly invent machine guns and cluster bombs.