Skip to content
Home / Delve into the Depths in the Kobold Blog / Expanding Codex: Devil Shark 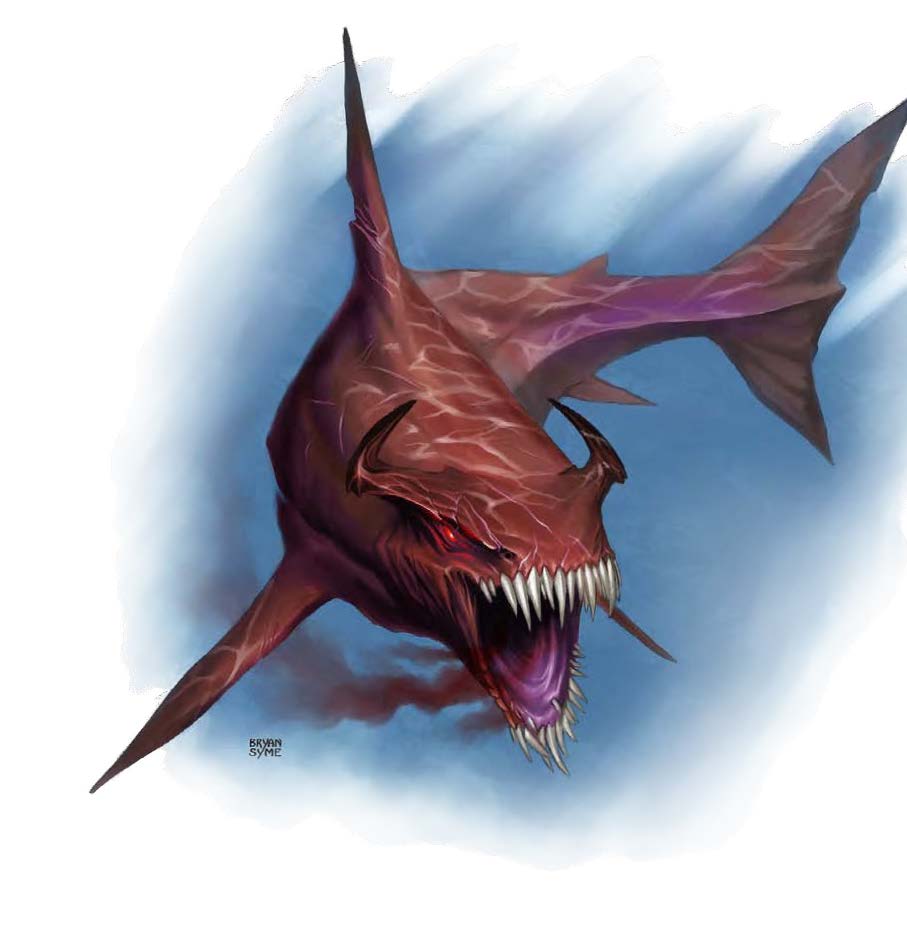 The following changes allow GMs to alter a devil shark without modifying its challenge rating.

Amphibious. The devil shark can breathe air and water. It also has a speed of 10 feet.

The devil shark loses its Water Breathing trait. Additionally, its swim speed is reduced to 40 feet.

Crushing Charge. If the devil shark swims at least 20 feet straight toward a creature and hits with a slam attack on the same turn, the target takes an additional 22 (4d10) bludgeoning damage and must succeed on a DC 18 Strength saving throw or be knocked 20 feet away from the devil shark.

The devil shark gains a slam melee weapon attack, and its bite attack is modified:

Summon Giant Shark (1/Day). The devil shark summons 1d4 sharks. A summoned shark appears in an unoccupied space within 60 feet of the devil shark, acts as an ally, and remains for 1 minute.

The devil shark loses its Magic Resistance trait when it gains the Summon Giant Shark action.

Vortex (Recharge 4–6). The devil shark creates a vortex of water within 30 feet of it that lasts for 1 minute. The vortex is 5 feet in diameter and up to 30 feet tall. A creature occupying the space where the vortex appears or entering the vortex for the first time on a turn must make a DC 18 Dexterity save or be restrained and take 2d8 bludgeoning damage. As an action, a creature can free itself or another creature from a vortex by succeeding on a DC 18 Strength check.

The following magic items and spell are inspired by abilities possessed by a devil shark.

When you wear this burgundy face covering, it transforms your face into a shark-like visage, and the mask sprouts wicked horns. You gain a bite attack that deals 1d8 piercing damage and that counts as a magic weapon. You also gain a +1 bonus on attack and damage rolls made with your bite attack.

Additionally, you have advantage on Charisma (Intimidation) checks while wearing this mask.

Curse. The mask is cursed, and becoming attuned to it extends the curse to you. As long as you remain cursed, you are unwilling to part with the mask, wearing it at all times. If you haven’t used the mask to bite a living creature before dusk, you tear out a chunk of your flesh. You take 2d6 necrotic damage and your hp maximum is reduced by an amount equal to the damage taken. This reduction lasts until the curse is removed. If your hp maximum is reduced to 0 as a result of this curse, you die, transform into a devil shark, and teleport to the nearest open body of water.

Fashioned from a devil shark’s stomach lining, this rubbery pill is cold to the touch. Upon swallowing the pellet, which leaves you feeling bloated, you gain immunity to cold damage. Up to 1 hour after swallowing the pellet, you can expel a 30-foot cone of cold water. Each creature in the cone must make a DC 16 Constitution saving throw. On a failed save, the creature takes 8d6 cold damage and is pushed 10 feet away from you. On a success, the target takes half the damage and isn’t pushed away.

You touch a willing creature. The target gains a keen sense of smell, granting it advantage on Wisdom (Perception) checks that rely on smell. Additionally, the target has advantage on melee attack rolls against any creature that doesn’t have all its hp.

The frenzy induced by the spell causes the target to lose the ability to discern between friend and foe. Each round, it has a 20% chance to attack any adjacent living creature that doesn’t have all its hp.

At Higher Levels. When you cast this spell using spell slot of 4th level or higher, you can target one additional creature for each slot above 3rd.