Skip to content
Home / Delve into the Depths in the Kobold Blog / Boarticulture: Brutes of the Swine (Part 3 of 3) 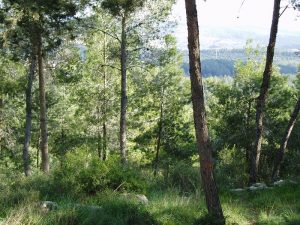 These huge porcine creatures are often thought to be only a rumor. They have never been sighted outside of the fey realms, where they spend most of their time basking in sunny clearings. They resemble mossy mounds covered with pine shrubs and small trees when at rest. It is rare to find more than one hogwood together, but they have been known to associate with family colonies of porky pines or to serve as guardians for powerful fey…

TRAITS
Forest Camouflage
When in terrain that consists mostly of trees, underbrush, plants, or natural growth, the hogwood gains a +5 bonus on Stealth and can hide with any cover or concealment.

Light Feeding (healing)
If the hogwood begins its turn in an area of bright light, it regains 10 hp.

[m] Pig-Headed Rush • Recharge 5, 6
Effect: The hogwood moves up to twice its speed and can move through enemies’ spaces during the move. The hogwood cannot end its movement in a space occupied by a creature. Each time the hogwood enters an enemy’s space for the first time during the move, it makes the following attack against that enemy.
Attack: Melee 0; +15 vs. Reflex.
Hit: 2d8 + 8 damage, and the enemy falls prone.
Effect: At the end of this movement, the hogwood makes a melee basic attack as a free action.

Resurgence • Encounter
Trigger: The hogwood first becomes bloodied during an encounter.
Effect (Immediate Reaction): All powers or abilities of the hogwood are recharged.

Once provoked, a hogwood can decimate unprepared foes with its varied attacks. A hogwood does not hold back and uses its most powerful attacks at first opportunity. It actively seeks out any foe who deals fire damage, and it attempts to destroy that enemy first if it is able to do so, making use of its light step to avoid unwanted combat.

4 thoughts on “Boarticulture: Brutes of the Swine (Part 3 of 3)”