Skip to content
Home / Delve into the Depths in the Kobold Blog / Monster Monday: Zeihen 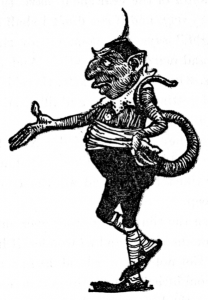 Known as the Dealmaker, Zeihen may appear with the help, knowledge, or item you need, but always at a horrible price.

Zeihen is a small, grubby creature born of the fey yet possibly the only one of his kind. Although physically small and weak, he has survived millennia by making deals. His uncanny ability to get into places he shouldn’t gives him unparalleled information, which he sells to those who need it in exchange for items, favors, or even servitude, and he then sells these items, favors, and servants for more information. Even the most powerful of creatures have learned to fear Zeihen, for while he may appear with exactly the object or knowledge you need, he will only appear when you are desperate enough to pay his heavy prices.

Physically, Zeihen is only a CR 2 monster, but the situations he places people in can easily climb to much higher Challenge Ratings. He rarely appears in a situation unless he knows his survival is assured, and usually he does so with several powerful guards bent by contract to his services.

TACTICS
Zeihen avoids combat as much as possible, relying on his contracts and slaves to protect him. If ever engaged in combat, he runs and hides or sends his guards to deal with the threat.