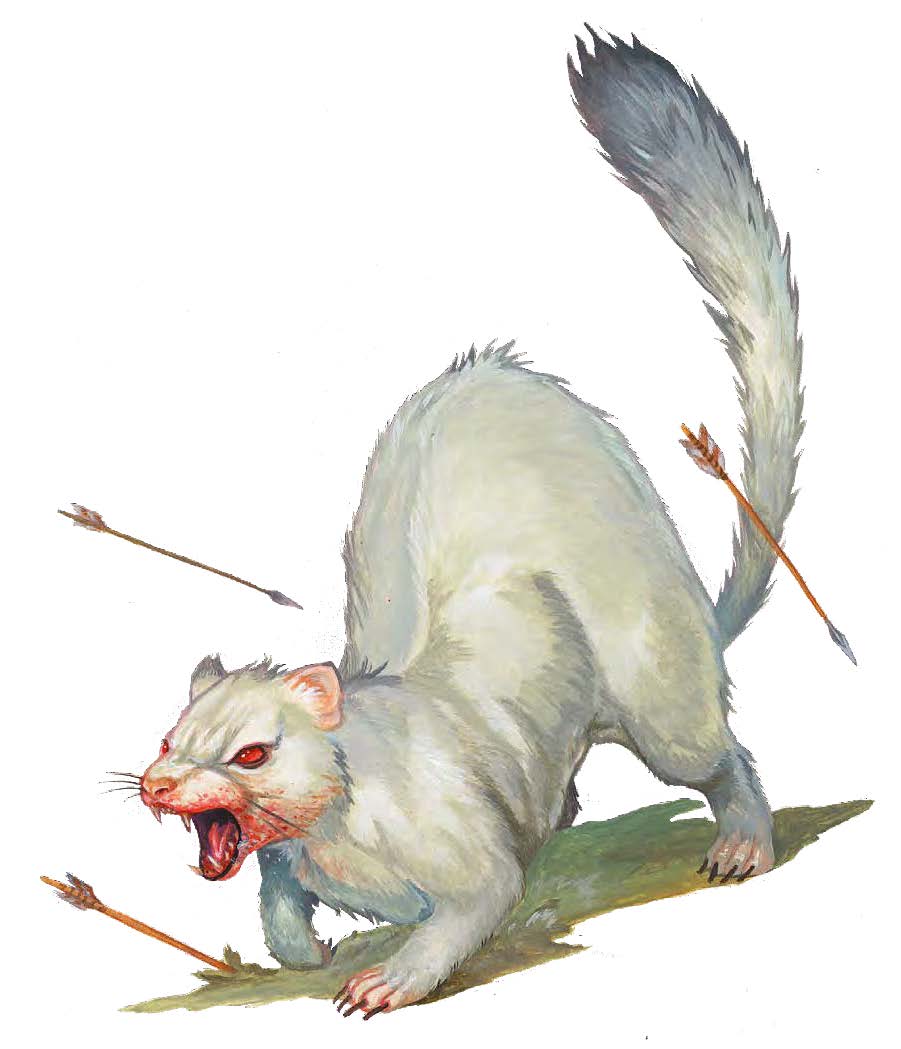 The following changes allow GMs to alter an albino death weasel without modifying its challenge rating:

Albino Camouflage. The albino death weasel is naturally camouflaged in areas with white backgrounds, such as snow-covered landscapes or against buildings painted white. While it is camouflaged in this way, it has advantage on Stealth checks and can hide from creatures that can see it clearly.

Blood Drain. Melee Weapon Attack: +5 to hit, reach 5 ft. one target. Hit: 8 (2d4 + 3) piercing damage. The target is also grappled (escape DC 13) if it is a Medium or smaller creature and the albino weasel isn’t already grappling a creature. Until this grapple ends, the target is restrained, the weasel can’t bite another target, and at the start of each of the weasel’s turns, the target loses 8 (2d4 + 3) hit points due to blood loss.

The albino death weasel loses its bite and claw attacks.

Blood Frenzy. The albino death weasel has advantage on melee attack rolls against any creature that doesn’t have all its hit points.

The albino death weasel only has keen smell and no longer has advantage on Wisdom (Perception) checks that rely on hearing.

Swimming Death Weasel. The albino death weasel was reared in a more aquatic environment. It gains a swim speed of 30 feet.

Weasel War Dance. The albino death weasel makes two attacks: one with its bite and one with its claw. If the weasel reduces its walking speed to 40 feet, it has advantage on an attack against a creature if it moves at least 5 feet before attacking it. If it splits its attacks, it must move an additional 5 feet to gain advantage on the second attack.

The following feat is inspired by the albino death weasel:

Confounding opponents with your erratic movements, you gain the following benefits:

The following magic item and spell are inspired by abilities possessed by an albino death weasel:

Rangers who don’t mind the albino death weasel’s voracious appetite have raised miniature versions of the animals to use as companion creatures.

Keen Senses. The companion albino death weasel has advantage on Wisdom (Perception) checks that rely on hearing or smell.

Pounce. If the weasel moves at least 20 feet straight toward a creature and then hits it with a claw attack on the same turn, that target must succeed on a DC 12 Strength saving throw or be knocked prone. If the target is prone, the creature can make one bite attack against it as a bonus action.

Musk Spray (Recharges after a Short or Long Rest). The weasel unleashes a spray of foul musk in a 15-foot cone. Each creature in that area must succeed on a DC 11 Constitution saving throw or be poisoned for 1 minute. A creature can repeat the saving throw at the end of each of its turns, ending the effect on itself on a success.