Skip to content
Home / Delve into the Depths in the Kobold Blog / Out of the Frying Pan: The Duneglider 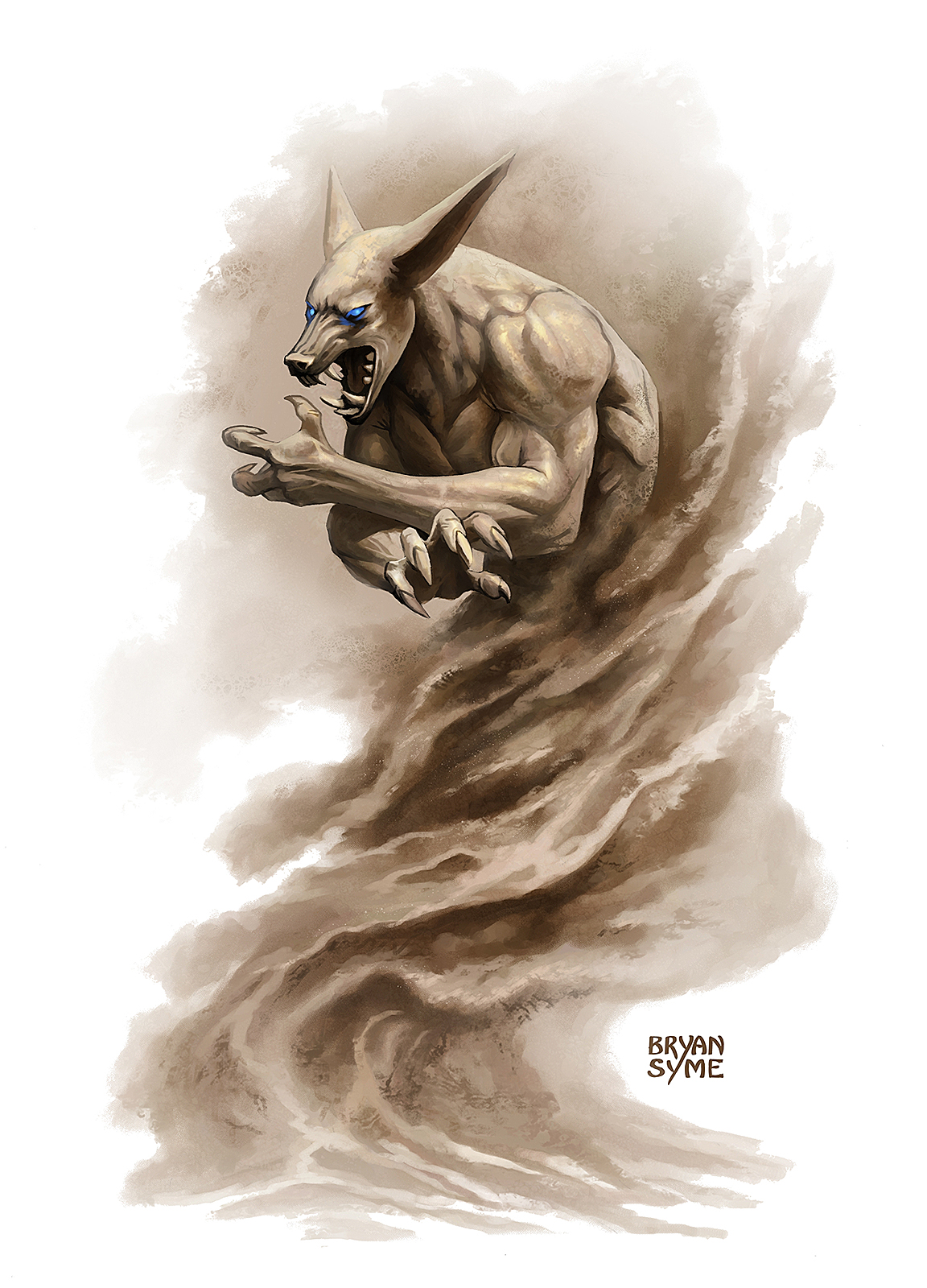 Encounter 1: We’re Sunk Before We…

In reparation, the dressmakers procured a fast, discreet sand ship to serve as al-Uzzah’s emergency courier. Ever suspicious, the Saph-Saph merchant lord has assigned PCs to board the Duneglider as guards, “gown escorts” ensuring its delivery to the bride’s entourage at the Tamasheq ceremonial site.

The sun-seared vista of rolling, wind-swept sand seems endless. Dunes rise and fall, flowing south and east like waves on a sculpted sea. Despite the environment, you notice many similarities between sailing on water versus sand. The pitch and yaw of the vessel, the “swells” and “spray,” while more pleasant on water are still reminiscent of maritime travel. Even the shouting is familiar.

The voyage begins well, but on the dawn of the second day, the Duneglider’s insidious pilot makes his move. Throwing her hard to port and across the wind, he drives the Duneglider’s starboard pontoons through a nearby sandstone formation, snapping outriggers and careening her hard. As the port side pitches high and she tries to roll, the ship’s deckhand is flung screaming from the mainsail yard to disappear among billowing dust clouds. A successful DC 16 Dexterity saving throw prevents PCs being knocked prone. Characters with vehicle proficiency (water) or either the pirate or sailor background make all ship-related saves and skill checks with advantage.

Developments. As the Duneglider slides into a capsizing turn, give PCs 2d4+3 rounds to act before tumbling into a spar-snapping, bone-breaking barrel roll. Nautically experienced characters will try stabilizing the ship, delegating emergency measures, slowing momentum, and counteracting the roll.

Brace for Impact! PCs spending their time attacking anubians or capturing the pilot or who’ve failed all damage-control checks when time expires suffer the following:

Each successful damage-control check (excluding for rigging) reduces impending shipwreck damage (2d6) to everyone onboard. Allow one success per category. GMs are encouraged to expand, alter, and add to suggested situations, solutions, and consequences below.

Rigging: PCs must “get aloft” (ascend and navigate the rigging) before attempting any checks for the shrouds or sail. A successful DC 16 Dexterity (Acrobatics) check indicates success.

Shrouds: Once aloft, three successful melee attacks (AC 13), made with disadvantage and causing at least 9 slashing damage each, will cut free the snarled lines.

Sail: Slashing or releasing the full sail to reduce speed is impossible until the shrouds are slacked off (above). A successful DC 16 Intelligence (Arcana) or Dexterity (Sleight of Hand) check followed by 15 slashing damage (AC 12) indicates success. 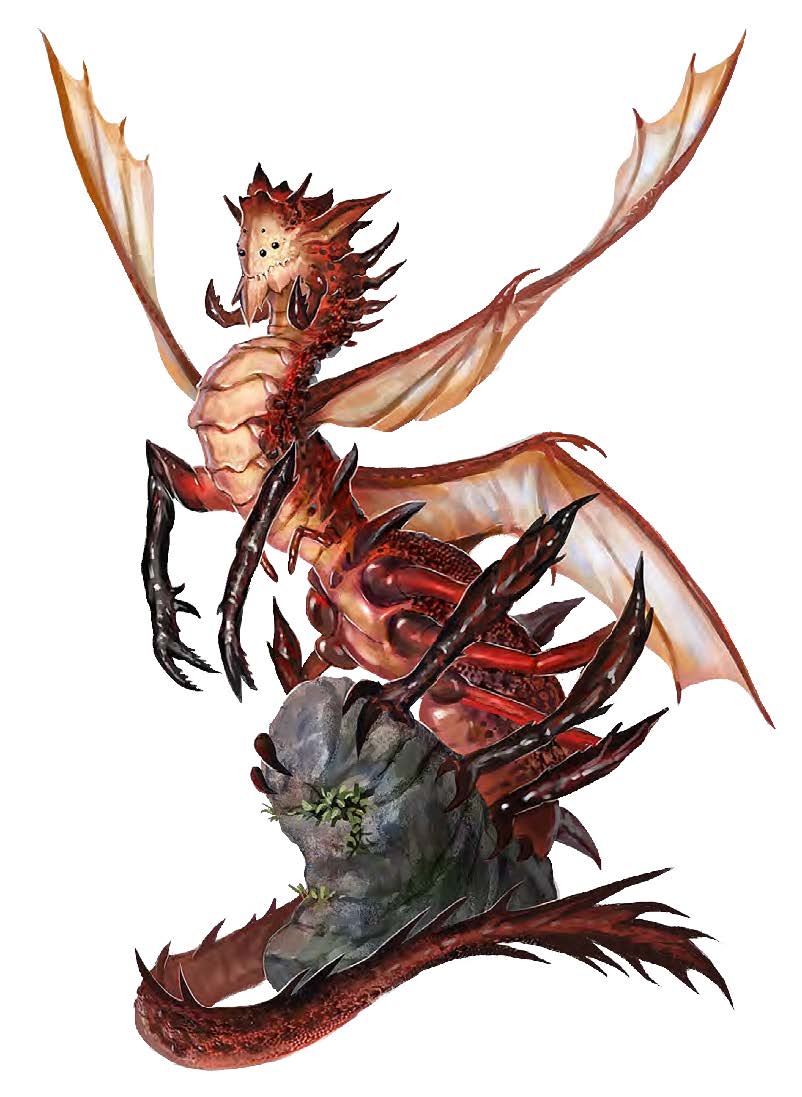 Whether the Duneglider rolled, slid, or crashed, she now rests, broken and leaning amid the boulder-strewn shadows of immense sandstone formations.

Dazed, you struggle upright, wiping sand from your mouth and eyes. You’re relieved to see others nearby, also thrown clear to land among the scattered sweep of debris littering the ship’s haphazard wake. Squinting through the escalating swirl of more dust clouds, you begin hailing your comrades before realizing, “There should be no more dust clouds.”

The spider drake (see Creature Codex ), Ungolithryx, swoops from her observation crag, descending on the Duneglider’s wreckage to loot and feed on the dead and damaged so conveniently delivered to her. PCs should note tactical advantages in the Duneglider’s wreckage and the party’s scattered (GM-determined) positioning. The spider drake fights until below 50 hit points before fleeing back up the rockface. PCs succeeding on DC 14 Strength (Athletics) checks can safely make the 90-foot climb. Midway through the climb, a sand spider (see Creature Codex ) lunges from its trapdoor lair (DC 16 to detect). PCs defeating the arachnid find its nest contains the silk-bound form of the Duneglider’s escaped pilot (or missing deckhand), poisoned and near death. If revived and healed, he exchanges information for life and liberty.

“Abdel al-Uzzah wages a secret war against certain regional Tamasheq leaders, his future son-in-law foremost among them—deeming the sacrifice of his ninth daughter to be tolerable. He commissioned my masters, the Lengfolk renegades X’nog and G’nox, to weave a magical murder-dress for the wedding night—no steel, suspect, or motive, only corpses. I wrecked the Duneglider here to draw out the drake, enabling the Lengfolk to enter the lair unmolested. They counted on you to slay or delay the drake long enough to accomplish their task and retrieve its eggs, their true goal.”

The gown is a thread-bound construct (see Creature Codex ) of a ghostwalk spider (see Tome of Beasts). Its single-use magic is attuned to activate for 1 hour at midnight on its first day worn by an intelligent being. 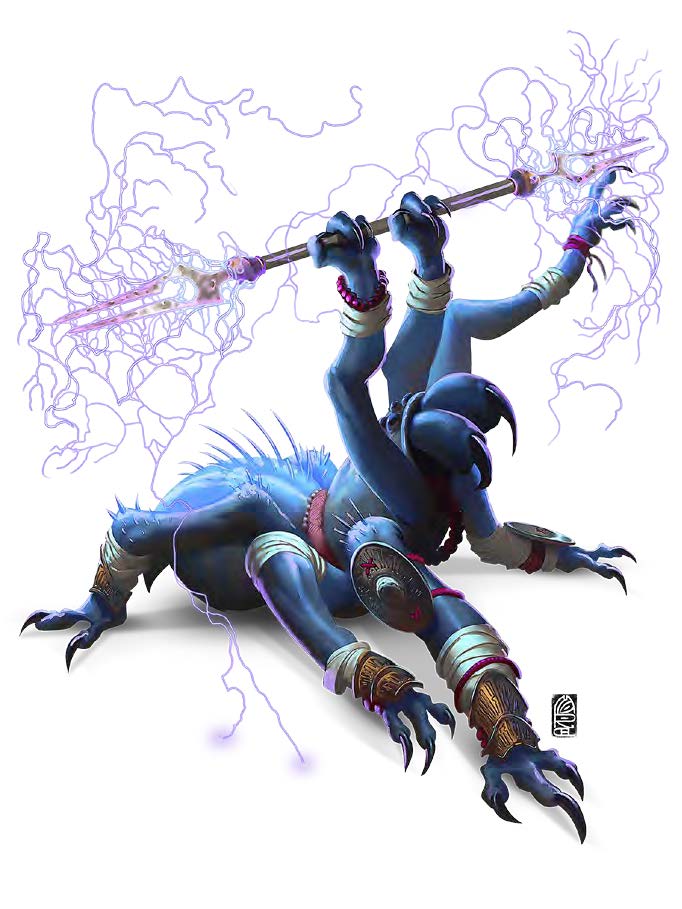 Encounter 3: Of Flies and Spiders

PCs summiting the rock can enter the irregular, web-draped cavern unheard over the raging tumult of draconic frustration echoing out. Inside, husks of victims dangle amid web-strewn stalactites and stalagmites (difficult terrain), crowding the uneven floor and ceiling. Her back to the cave mouth, Ungolithryx rears up, directing impotent rage at several peculiar creatures.

Developments. Caught pilfering eggs, the Lengfolk now use them to hold off Ungolithryx and compel her attacks. Unless victory’s imminent after two rounds of combat, X’nog and G’nox attempt escape (etherealness) with spider drake eggs in hand one round after Blotch too teleports away, carrying what eggs he can and leaving Ungolithryx and the spiders of Leng to the adventurers.

Victorious PCs have much to consider afterward. What to do about the deadly dress, the Tamasheq chieftain and his bride, or the Lengfolk? What of Abdel al-Uzzah, his schemes and motivations, or the PCs’ current situation—desert castaways, wounded, lost, and unknown leagues from the nearest aid?

2 thoughts on “Out of the Frying Pan: The Duneglider”