Skip to content
Home / Delve into the Depths in the Kobold Blog / Encounter Codex: Shrine of the Primeval Toad 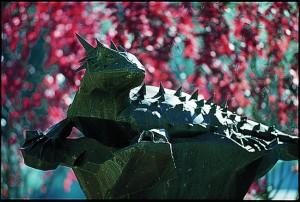 “Encounter Codex” presents individual encounters that can be quickly slotted into any adventure. They are system neutral and easily adapted to any edition (and other games for that matter) with little effort—just add stats.

Patches of ochre fungi illuminate this yawning cavern with preternatural moonlight. A waterfall tumbles from a fissure in the high ceiling, splashing down into a wide pond of murky water shrouded in mist. Through the dripping miasma, a totem pole can be seen jutting from the water, its submerged base surrounded by a halo of dozens of lily pads, atop which rest toads of various colors.

The pool of water is choked with weeds and slime, and runs 5 ft. deep at its center… A dungeoneer observing the toads for a moment notices that there are four distinct varieties: grey, spotted crimson, light blue, and black. Casting an effect that dispels magic on a toad transforms it into a dungeoneer of a class based on the color of toad affected: grey—wizard, spotted crimson—fighter, light blue—cleric, black—rogue. The GM shall determine the behavior and disposition of the restored dungeoneer.

A 10-ft.-high totem pole, hewn from emerald-colored soapstone, rises from the bog. Perched on top of the totem is a large stone idol depicting a toad with six clawed limbs and vestigial wings. There are glyphs inscribed on the side facing away from the waterfall, which appear exactly as below:

Close inspection reveals that each letter can be pushed into the totem like a button.

Pushing “P” in the first column, “A” in the second column, and “S” in the third and fourth columns—in that order—causes a viscous sloshing sound to emanate from behind the waterfall. Pushing any other rune permanently polymorphs the victim into a toad unless he or she saves against or resists the effect. The buttons reset immediately after the trap is triggered.

Pushing three incorrect sigils causes the cavern to shake, awakening an acid-breathing hydra ghoul that sleeps in a deep bed of silt beneath the water.

A black stone archway—15 ft. wide by 20 ft. tall—is hidden in a shallow cave behind the waterfall. Set into the archway is a thick “door” made of flowing, continually regenerating green slime. Fishlike faces and octopoid tentacles appear to push against the slime from within at unusual intervals. If the totem puzzle has been solved, a 10-ft.-diameter hole appears in the slime, allowing entry into a vault carved out of cyclopean blocks of soapstone. It contains a treasure hoard of moderate size.

Award the players experience for solving the puzzle and defeating the hydra ghoul if awakened. The GM may award additional experience for restoring polymorphed dungeoneers.

3 thoughts on “Encounter Codex: Shrine of the Primeval Toad”