Skip to content
Home / Delve into the Depths in the Kobold Blog / Howling Tower: The Elevator Pitch 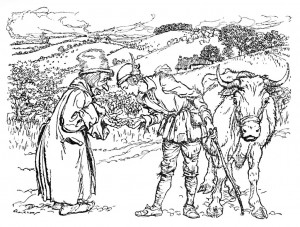 When designing a world as a setting for replaying and storytelling, condensing your concept down to an elevator pitch is a great exercise. Not that you’re likely to corner a venture capitalist and a Hollywood producer in an elevator and pump them to invest money in your idea, but because you are going to corner friends, players, and readers and ask them to invest something even more precious than cash in your creation—their leisure time.

I can’t talk about elevator pitches without declaring how much I hate the term. Once that proletarian complaint is out of the way, I’m ready to proclaim that the elevator pitch is a great tool for sharpening up a product.

Did I say “product”? Absolutely! Even if your worldbuilding effort is entirely for private consumption, treating the work as a product is constructive.

Every campaign idea needs to be “sold” to someone before it gets played or read. For most worldbuilders, “someone” means your local group of friends and D&D players. When pitching your world, you need to hook your potential audience by the imagination and not let go. How many times have you listened to someone ramble on about their pet campaign idea, the whole time thinking “when is this nincompoop going to shut up? I wouldn’t spend five minutes in the place he’s describing.”

Time is the ultimate limiting factor. No one wants to waste their time playing in a lame RPG campaign. They want to know from the start that their time won’t be squandered. If you can get people excited about your setting and make them eager to play with just a one- or two-minute description, then you probably have a strong concept.

The vital element here is not salesmanship. The last thing you want to do is trick your friends into playing in your setting with a deceptive sales pitch. They’ll figure out the truth soon enough, and then your credibility goes down the drain.

The vital element is value. Players and readers want to feel that what they got out of a four-hour gaming session was worth more than something else they could have done with those four hours. When it comes to a new campaign, players are asked to pledge potentially hundreds of hours. They deserve good information about what they’re committing to.

The web offers many excellent tools and guides that can help you build an effective elevator pitch. Every one of them tells you to start with a quality idea. The “you can’t make a silk purse out of a sow’s ear” law is in full effect here.

The better your product, the easier it is to pitch. If you’re having a hard time coming up with selling points for your campaign, consider that a clue. Maybe it’s the setting, the theme, and the plot that need sharpening up, not just the pitch. If you can’t communicate the elements that make your setting cool in under a minute, then maybe the concept is too complex—or maybe it’s not as cool as you think it is, and those aspects need spicing up. If you can’t keep the pitch sharp and focused, you might be emphasizing so many elements that they blur together instead of standing out.

Sharpening an elevator pitch this way can’t help but hone your world concept, too. As the concept grows stronger, the elevator pitch becomes more compelling, and the odds go up that you’ll actually get to send players on adventures in your creation. Since that’s generally the point, devising an elevator pitch to describe your world shouldn’t be an afterthought. It’s really an integral part of the process that can strengthen and guide the whole effort.