Skip to content
Home / Delve into the Depths in the Kobold Blog / DM Selfie: Show Us Your DM Screen! 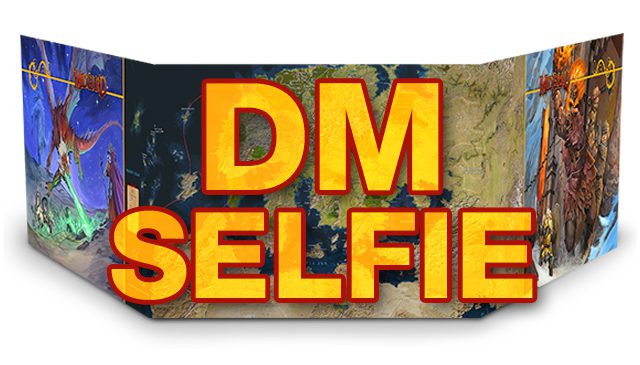 What could be finer than the exhilaration and mystery of the DM screen? Oh, the secrets it keeps!

Share a photo of your DM screen and surrounding… things. This can be a selfie or a view from the DM side of the table. It can be your dog or cat behind the screen. It can be anything so long as there is clearly a DM screen somewhere.

Then a panel of judges will pick their favorites! The winner of the grand prize will receive the Midgard Worldbook and more, including our new fancy the Midgard DMs Screen (5E | Pathfinder).

There are all sorts of paths to victory, so play to your strengths. Inspire us! Scare us! Intrigue us! Or make us laugh till our sides split!

$10 store credit at the Kobold Store!

Our talented and experienced panel of judges are as follows: Wolfgang Baur, Wade Rockett, and Ben McFarland.

By submitting an entry to Kobold Press, you are entering the Kobold Press (the “Sponsor” or “Kobold Press”) DM Selfie Contest (the “Contest”).

Send an email with your submission to the “DM Selfie” contest at scott(at)koboldpress(dot)com no later than May 31, 2018.

The submission must take the form of a single photo sent as an email attachment of the minimum size required.

The email subject line should read DM Selfie Contest Submission in the email’s subject line. Your full name and contact information should be in the body of the email.

Any explanatory text in the email should be no longer than 100 words.

4. Who Will Win: On or about June 1, 2018, one (1) Grand Prize Winner, one (1) Second Place Winner, and three (3) Honorable Mentions will be selected by the Sponsor from all eligible entries received. All decisions made by Sponsor on all matters relating to the Contest are final and binding. The winners will be notified on or around June 1, 2018, via the email address provided by entrant at the time of entry. If a winner does not respond to the notification sent to the email address he or she provided after two (2) notifications have been sent by Sponsor, such winner will be disqualified and will forfeit the finalist position. In such event, the winner position will be awarded to another eligible entrant chosen from the remaining pool of entries in accordance with the terms set forth herein. Prizes will be fulfilled approximately one (1) month after the conclusion of the Contest.

5. Prize Information and Approximate Retail Value: Five (5) winners will be awarded prizes consisting of the following:

If winner is a minor in his/her place of residence, the prize will be awarded to winner’s parent/legal guardian. Each winner (his/her parent or legal guardian in the case of a prize awarded to such parent or guardian) must provide his/her mailing address to Sponsor and must execute and return an affidavit of eligibility, a liability release/publicity release (except where prohibited) and any other legal documents that Sponsor may require, within five (5) business days from notification in order to receive the prize, which will be provided by Sponsor to the address provided. Prizes are not transferable, assignable, or redeemable for cash. Sponsor, in its sole discretion, may substitute a prize of equal or greater value than the prize identified herein. If any winner or winner’s parent/legal guardian either fails to timely provide his/her mailing address or declines a prize or fails to comply with any of the Official Rules as outlined herein, or if any prize is returned as undeliverable, such winner will be disqualified and an alternate finalist or winner may be selected at Sponsor’s sole discretion. Winners (winner’s parent or guardian in the case of a prize awarded to such parent or guardian) are solely responsible for paying all applicable federal, state and local taxes, and all other expenses associated with any prize.

4 thoughts on “DM Selfie: Show Us Your DM Screen!”