Skip to content
Home / Delve into the Depths in the Kobold Blog / Secret Lairs: The Haunted Hovel 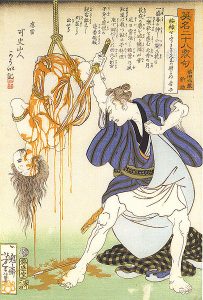 Sigard the Woodsman was a doting father. Ever since his wife was taken by the Black Death, his children have been his whole world. But, of course, this was before the brain mold…

He could hear them laughing inside their modest home, preparing for the evening meal. They took his wife. Faster and faster, he kicked the rotating grindstone.

He could hear them mocking him over the bustle of the dinner dishes. His axe, the tool of his trade, was now razor sharp.

Sigard rose from the whetstone. It was time to silence the laughter.

Placed amid the trees of an old forest, this rest stop is not what it seems. Time has muted the screams, and scavenging animals have removed the bones of the once-happy family. The culprit, though, still remains…

The party might see the woodsman’s plague-riddled wife, the poor murdered children, or the axe-wielding woodsman himself. The apparitions are harmless, but their appearance fuels the delusions caused by the mold.

The roof is leaky and the door is warped, but it’s better than standing outside… for a while anyway. The dripping water or a stuck door (break DC 18, hp 20) at the right time could heighten the paranoia and the fun.

A silent killer is waiting in the kitchen, under the beds, even in the rough mortar of the chimney. The dusty, chalk-like mold is readily inhaled and hangs in the air when disturbed. If an adventuring party stays overnight—perhaps during a sudden rainstorm—they must roll well to avoid the effects of the mold.

All the characters are affected, though some will be luckier than others.

Your friends are out to get you. They’ve never appreciated everything you do for them.

< You are cured.
<>Initial Effect You start an argument with an ally. You take a −3 to Endurance checks.
> You make a melee basic attack against an ally.