Skip to content
Home / Delve into the Depths in the Kobold Blog / Art of Midgard: Nymph and Knight 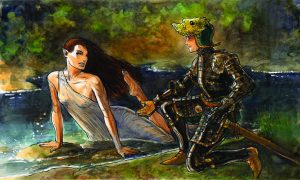 The Midgard Campaign Setting is available for pre-order in softcover and hardcover, and when it comes out in October you’re going to see some gorgeous art that brings this dark world of deep magic to life. In the Art of Midgard blog series, the Midgard illustrators share a behind-the-scenes preview of their favorite pieces from the book. This time we have Mark Smylie with nymphs and knights.

Nymphs and knights are kind of a classic pairing. For this particular piece, Wolfgang had thrown out some options for a picture of a river spirit or lorelei; one of those options was her speaking to a Green Knight on the shore, and the general description had immediately brought to mind J.W. Waterhouse’s classic painting of Hylas and the Nymphs, so that became my visual cue for the piece. Dark greens, browns, and deep blues are predominant in Waterhouse’s painting, and there’s meant to be a sense of stillness about it (despite Wolfgang’s request for a bit of motion and playfulness with the nymph).

Wolfgang had mentioned the idea of a “Green Man of the Woods” helm for the Green Knight, so I used a harness by the Italian master armorer Filippo Negroli for inspiration and added the Green Man touches to the helm, trying to keep to something historic but with a touch of the fantastical. Negroli’s harnesses are often like wearable works of art, and for me his work is always among the best starting points for thinking of fantasy armor. There are several surviving examples of his helmets with hair and beards worked into their appearance. Wolfgang hadn’t liked the way the Green Man helm looked at first so I wound up lightening it and turning it gold-colored. I wanted to conjure perhaps bits of the Old English Sir Gawain and the Green Knight and perhaps a bit of La Belle Dame Sans Merci (a Keats poem for which I had once co-written an adapted screenplay for a short film, so the themes of the piece are kind of an old friend). Because he’s a “Green Knight” then I presume that he is safe in his interactions with the nymph, but of course, by tradition, interactions with nature spirits always carry with them a bit of risk for men.

The Midgard setting has always struck me as being so well grounded in a sense of European history and culture that I’ve always tried to keep the costume design recognizable (even for minotaurs and gearforged characters), so that a character looks like he or she could have come from a real-world culture; that’s been one of the great appeals to working on the Midgard books—that evocation of history and place and past come alive.

Artist Bio: Mark Smylie works primarily in comics as the writer and illustrator of the epic military fantasy series Artesia and as Chief Creative Officer at Archaia Entertainment. His illustration work has appeared in works from Wizards of the Coast (for Dungeons & Dragons), White Wolf (for Vampire: The Masquerade and Werewolf: The Apocalypse), Brigand Publishing (for Avlis), Kobold Quarterly, and collectible card games from AEG (L5R and Warlords). He also designed and illustrated a roleplaying game based on Artesia that won the Origins Award for Roleplaying Game of the Year (2006), three Indie RPG Awards, and was nominated for six ENnies. Two of his fantasy RPG illustrations, including one from the Midgard setting, are currently included in the Art of RPGs exhibit at Krabjab Studios in Seattle, WA.

1 thought on “Art of Midgard: Nymph and Knight”