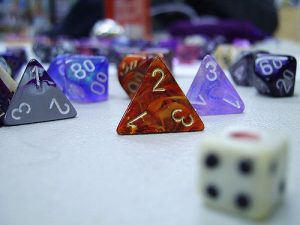 Show us your dice, for a chance to win MOAR DICE!

If you’re like us, you love dice—and you can NEVER have too many. The Dice of Doom photography contest is your chance to show off your collection and add to it!

Share a photo of your dice collection with us (all of it or a noteworthy selection), and a panel of judges will pick out five finalists to post on the Kobold Press website. Then, we’ll ask the public to vote on the entry they think should win the grand prize! The winner of the grand prize will receive a set of dice from the Kobold Store, including our new fancy Jade or Opal dice.

There are all sorts of paths to victory, so play to your strengths. Dazzle us with the beauty of your collection! Awe us with its massive size! Entertain us with a creative presentation! Leave us speechless with wonder at your Byzantine sorting system! 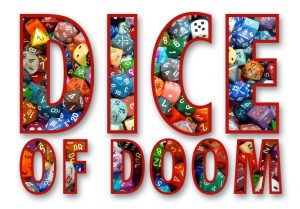 Finalists: One Set of Q-Workshop Dice from the Kobold Store.

Our talented and experienced panel of judges are as follows: Wolfgang Baur, Marc Radle, and Liz Courts.

By submitting an entry to Kobold Press, you are entering the Kobold Press (the “Sponsor” or “Kobold Press”) Dice of Doom Contest (the “Contest”).

Send an email with your submission to the “Dice of Doom” contest at scott(at)koboldpress(dot)com no later than November 30, 2016.

The submission must take the form of a single photo sent as an email attachment of the minimum size required.

The email subject line should read Dice of Doom Contest Submission in the email’s subject line. Your full name and contact information should be in the body of the email.

Any explanatory text in the email should be no longer than 100 words.

3. Dates and Deadlines: Eligible entries must be received no later than 11:59 p.m. Eastern Time on November 30, 2016. Sponsor’s computer is the official time-keeping device for the Contest.

4. Who Will Win: On or about November 30, 2016, five (5) finalists will be selected by the Sponsor from all eligible entries received. All decisions made by Sponsor on all matters relating to the Contest are final and binding. The finalists will be notified on or around November 30, 2016, via the email address provided by entrant at the time of entry. If a winner does not respond to the notification sent to the email address he or she provided after two (2) notifications have been sent by Sponsor, such winner will be disqualified and will forfeit the finalist position. In such event, the finalist position will be awarded to another eligible entrant chosen from the remaining pool of entries in accordance with the terms set forth herein. Finalist prizes will be fulfilled approximately one (1) month after the conclusion of the Contest. The finalists will be announced on the Kobold Press website, and then the voting public will choose an entry from among these five (5) to be the sole winner of the contest’s grand prize. Voting for the grand prize winner will close on or around December 14, 2016.

5. Prize Information and Approximate Retail Value: Five (5) finalists will be awarded a prize pack consisting of the following:

The total finalist prize pack has an estimated value of $20.00

The total grand winner prize pack has an estimated value of $50.00

6 thoughts on “Dice of Doom Contest”