Beyond Damage Dice: Weapon Talents and Properties for AGE System 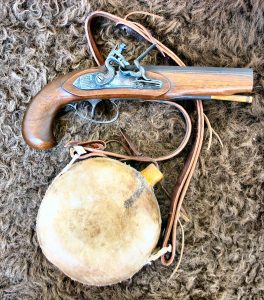 What follows is a translation of the previous Beyond Damage Dice mechanics to the AGE System—with the pistol thrown in and listed first. The AGE System has a very different approach. With the AGE system, you have to have a proficiency in the weapon, and it uses a tiered Talent system to allow for special combat stunts. This means that your players must invest more of a character’s resources, such as assigning Talents, to be able to perform these maneuvers.

Most of the maneuvers described are easily accommodated by the AGE System stunts. For most of them, they were made part of a weapon Talent, such as the Bludgeoning Talent listed below. Other weapons were harder to classify. They fit into a more general weapon class, but they had special features that set them apart. These special weapons have been converted to fit into a broader category with a special weapon feature. The GM should take care when allowing players to have these weapons. In many ways, they act as “magical” weapons because of these special features. These items should be exceedingly difficult to come by and should not be just sold to the players but, instead, either given or earned by the players.

Requirements: Trained in the Black Powder group, Accuracy 3 or higher

Carrying as many pistols as you can, the smell of cordite and black powder urges you into battle. You use your pistols in close combat, and you dance to the sound of gun fire.

Novice: Loading your pistols has become second nature to you. You may load your pistols using a Minor Action instead of a Major Action.

Journeyman: Your aim in combat is impeccable. You can now use the Disarm stunt at range. You make an opposed test of your Accuracy (Black Powder) against their Strength (Might). If you win, the weapon is thrown 1d6 + Accuracy yards away. This stunt may not be performed at farther than long range.

Master: Gun smoke fills the air as you crack off rapid fire shots. You may perform the Lightning Attack stunt for 2 SP instead of 3. To do so, you must either have a loaded pistol in each hand or be able to perform the Rapid Reload stunt.

Requirement: Trained in the Axe Group, Strength of 3 or higher

An axe is built for chopping and destroying all that it strikes. You have learned to use its devastating power in combat.

Novice: You have learned to put all of your weight behind each blow with an axe. When using an All Out Attack action, do +2 damage instead of +1.

Master: You know how to hack an enemy to pieces. When rolling damage, you may reroll up to one die that comes up 1. You must take the second roll. (Note, this benefit can stack with the Two-Hander Style Master benefit if using a Two-Handed Axe. So an Axe Fighter with Two-Handed Style could roll 3d6 for damage, choose to reroll, and then reroll a single 1 if there are any. Each benefit can only be used once.)

Requirements: Trained in the Bludgeon Group or Staves Group, Strength of 2 or higher

There is nothing subtle about your approach to combat. You want to smash your enemies.

Novice: Armor is no protection against your crushing blows. You may ignore 2 points of your opponent’s armor in combat.

Journeyman: The impact of your weapon hurls your enemies back. When performing the Skirmish stunt, you may move the enemy 4 yards in a straight line instead of 2.

Master: The ferocity of your attack causes contusions. For 2 SP, you can perform the Bruising Blow attack. You strike your enemy so hard, until the beginning of your next turn subtract their Dexterity from their Defense score.

This adds a new Focus.

Fighting—Flails: You gain proficiency with the Flails Group.

Requirements: Trained in the Flails Group, Fighting of 2 or better

You have mastered the use of the ball and chain in combat.

Novice: Flails work best when they are spinning at high speed. If you take the Activate action, you gain a +1 Fighting bonus until the end of the encounter. (Note, this cannot be combined with other weapon styles, such as Single Weapon Style.)

Journeyman: You have learned to tangle up your opponent’s shield and weapons. You can perform the Disarm stunt for 1 SP instead of 2. You can also perform a special Shield Snare stunt for 2 SP. When performing Shield Snare, you ignore the opponent’s shield bonus to armor when dealing damage. You may then make an opposed check using your Fighting (Flail Weapons) against the enemy’s Strength (Might) to pull the shield from their arm.

Master: For 4 SP, you can perform the Chain Garrote stunt by wrapping the chain of your weapon around your enemy’s neck. (Note, the enemy must have a neck and cannot be Big, Clockwork, or Many Headed.) This prevents your opponent from breathing or speaking, and your opponent will have a -2 to hit you as long as it is garroted. On its turn, the enemy may attempt to escape the garrote with a Major Action, using its Dexterity (Initiative) against your Fighting (Flail). Every round that you maintain the garrote, you do 1d6 Penetrating Damage to the target. A Minor Action is required to maintain the garrote.

Requirements: Trained in the Staves Group and armed with a Quarterstaff as a two-handed weapon, Accuracy of 2 or better

A long, straight piece of wood is all that you need to defeat your enemies.

Novice: Your staff is both shield and weapon. When wearing Leather armor or no armor, you may take an Activate action to gain a +1 bonus to your Defense, and opponents gain no bonus to hit if they outnumber you. This lasts until the end of the encounter.

Journeyman: You have learned to trip your opponents. You can perform the Knock Prone stunt for 1 SP instead of 2.

Master: You can use your staff to gain an advantage over your opponents. When wearing leather or no armor, you may take a Minor Action to perform a Vault maneuver. Choose an enemy that is not directly adjacent to you. You may move in a straight line and vault over that enemy with a Challenging (13) Dexterity (Acrobatics) check, depending on circumstances. You must land in an empty space behind your opponent. The vault itself requires 2 yards of movement. If successful, you gain a +2 advantage to hit your opponent.

This weapon likely originated with the foresters and lumberjacks of the Ordenn forest, who found a secret way of making axe heads they continue to keep secret. The Nordmansch make more axes than their woodsmen actually need.

The Nordmansch Greataxe is a two-handed weapon built to sunder other weapons. Its edge is hardened especially for this purpose, and its haft is likewise set with trapping prongs to catch and hold a foe’s weapon.

Because of its construction, the Nordmansch Greataxe has the following special property:

Disarming Prongs: The prongs set in the haft of the Nordmansch Greataxe are excellent at catching a foe’s weapon. Anyone armed with a Nordmansch Greataxe who has the Axe Fighter talent at Journeyman or above may perform the Disarm stunt for 1 SP instead of 2, and gains a +1 to the opposed test for the disarm.

A Nurian Hook is a one-foot square shaft that ends in a bronze hook with an arrow‑shaped point at the pommel. Embalmers and butchers use it to hang up corpses.

The special hook of this weapon allows for the following special weapon property:

Hook Trip: Any creature that is equipped with the Nurian Hook and is at least a Journeyman in the Bludgeon Weapon Style talent may perform the Knock Prone stunt for 1 SP instead of 2.

Politics in the Mharoti Empire are a battlefield, and not all wars there are won with words. The Scorpion Stiletto appears as an ornate, ceremonial knife, but its beauty distracts from the deadly poison secreted within—the venom of the Mharoti emerald scorpion. Though this knife originated in the Dragon Empire, it is now wielded by assassins and cutthroat politicians throughout Midgard and the Southlands.

These stilettos are exceedingly rare and cannot be purchased, only received as a gift or taken from someone’s cold, dead hands. It is an extraordinary weapon with the following special properties:

Easily Concealed: This weapon can be concealed from sight. It grants a +2 to any Dexterity (Legerdemain) checks to hide it from sight.

Poison Sting: If this blade is loaded with poison, upon a successful attack that causes damage, the wielder may perform a special Poison Sting stunt. For 2 SP, a hidden button on the stiletto’s pommel may be pressed that releases a deadly toxin secreted in the handle.  This can be any poison, but is usually emerald scorpion venom.

Emerald Scorpion Venom: This is a deadly neurotoxin that immediately attacks the nervous system, causing pain, paralysis and ultimately death.

On their turn, any creature injected with the venom makes a Constitution (Stamina) test to resist the poison. The creature must make 3 successful tests before 3 failures to avoid death. Each failure progresses the poison to the next effect. The 3 effects are:

Pain—Initially, any creature injected with emerald scorpion venom is immediately wracked with terrific pain. Their movement is halved and they receive a -2 to all Ability Tests.

Paralysis—The toxin progresses and begins to destroy the creature’s nervous system. The creature has no movement and will automatically fail any Ability Tests until the poison either runs its course or the creature dies.

Lingering Death—The creature’s Health is dropped to 0 and the creature is unconscious and close to death. The creature will die in 4+ Constitution turns unless someone makes 2 successful Intelligence (Healing) tests, one to stop the poison and one to stabilize the creature.

This longsword has a spring-loaded poniard concealed in the hilt, which quickly extends when the hilt is gripped in a particular way. It is particularly beloved by rogues as the concealed blade helps them sneak attack opponents already locked in combat. Kariv of a crueler bent have been known to poison the secondary blade.

The hidden blade allows for the following special weapon property:

Hidden Poniard: Any creature that is equipped with a Rothian Poniard and is at least a Journeyman in the Single Weapon Style talent may perform the Hidden Poniard stunt for 2 SP. With this, if the creature makes a Challenging (13) Dexterity (Legerdemain) test it will strike the opponent with the second blade. There is no attack roll for the second blade so it cannot generate additional stunt points. This smaller blade does d3+2 damage.

The Tijino poleaxe bears a long axe blade in front with a long, looping back hook designed to unhorse riders. The Tijino poleaxe has reach and can take advantage of all the Pole Weapon Style benefits. It also has an axe head so, at the Master level, receives the same benefit as the glaive and halberd.

The Tijino is specially designed to unseat riders from their horses, so it has the following special property:

Unmount: As a Major Action, you may make a single attack against a mounted creature. If the attack hits, the creature must make an opposed roll of its Dexterity (Riding) against your attack roll. If the creature fails, it is dismounted and takes 1d6+2 falling damage.