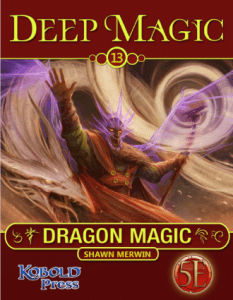 Magic that Roils in Blood and Bone

The dragons were among the first creatures to master all types of magic: controlling the elements, enchanting their lairs with innate defenses, and teaching their arts to their humanoid servants.

Today, their kin—true dragons and lesser creatures—are heirs to this powerful magic. Kobolds serving great wyrms learn spells that harness their innate draconic natures. A human with an ancient draconic ancestor might find a wizard mentor to help her focus her power. Special legions of dragonborn troops train with a master dragon mage to better defend their homeland from invaders.

Here is magic born in the abyss of time, in an ancient age where titanic winged masters wielded unimaginable power. Their blood burns within you—unlock its secrets, and wield the magic that is your birthright!