Skip to content
Home / Delve into the Depths in the Kobold Blog / The Paladin: Expanding the Boundaries of Faith, Part V 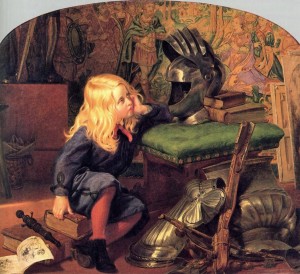 Through this series, I’ve argued that paladins should not be relegated to a single alignment, and I’ve given rules and advice for playing paladins of other alignments. This installment will detail my rules on playing a paladin who worships a chaotic neutral deity. If you’ve been following thus far, I hope you’ve enjoyed everything up to this point, and I hope you enjoy this last presentation. Without further ado, I present the rules for playing a nihilist. You will need both the Pathfinder Roleplaying Game Core Rulebook and the Advanced Player’s Guide.

The nihilist seems a walking contradiction. They proclaim by their lives and actions that they believe in nothing, yet what they are proclaim that they do, in fact, believe in something. In truth, the only thing the nihilists truly believes in are themselves: Each is an instrument of his or her deity’s will, so therefore anything the nihilist chooses to do is his or her deity’s will; anything that does not affect this is irrelevant and unimportant. Nihilists typically follow deities of such fickle aspects as Luck, Destiny, and Chaos itself, though some few are found in the service of gods of Death, Decay, or War. They do as they please and further their deity’s plans because they truly believe that nothing else matters. Pleasure is fleeting, life is temporary, but the cause… the cause will always exist.

The nihilist is likely the most difficult of the variants I’ve put forward in terms of placing within a party and in terms of roleplaying: Nihilists do what furthers a deity’s plans, what is interesting, what is immediately gratifying, only mostly in that order. Nihilists work best in a sandbox game where the players are encouraged to explore and experiment; without a truly compelling reason for the nihilist to be there, he or she would not fit well in a campaign that follows a strict, linear path.

As an NPC, the nihilist makes for a wonderful recurring antagonist, particularly one whose purpose is to give the characters a source of frustration and add a dash of challenge when things seem too easy.

Role: Nihilists are unique among the paladins in that they are best suited to harry enemies in their own ways on their own time rather than bolstering allies in the thick of things. They serve their own agenda and cannot be expected to work with another’s plans unless they find it agreeable.

The Nihilist uses the standard paladin rules with the following changes:

Aura of Chaos (Ex): The power of a nihilist’s aura of chaos (see the detect chaos spell in the Pathfinder Roleplaying Game Core Rulebook) is equal to his or her class level. This replaces aura of good.

Smite Law (Su): As the paladin’s smite evil ability, except that the nihilist’s ability functions only against those of lawful alignment and lawful outsiders.

Entropic Touch (Su): Beginning at 2nd level, a nihilist can sheathe his or her hands in chaotic energy that heals his or her own wounds and causes them in others. This ability functions as lay on hands, except that the nihilist can heal only herself or deal damage to other creatures on a successful touch attack.

Fear Me Instead (Su): At 3rd level, a nihilist is immune to fear (magical or otherwise), and is capable of throwing it back against enemies. If subjected to a fear spell or effect, he or she may forgo the immunity to make a saving throw against the DC; if the nihilist succeeds, the creature triggering the effect must make a saving throw against the DC or be affected as if it had been a target of the fear effect. If the nihilist fails the saving throw, he or she is affected normally by the fear effect. This replaces aura of courage.

Entropic Whim (Su): This ability functions as both the mercy class ability of the paladin and the cruelty ability of the antipaladin. At the indicated levels for either ability, the nihilist chooses a condition from the list. Whenever the nihilist uses his or her entropic hand ability to heal himself or herself, it removes all chosen conditions as per the rules for mercy; whenever the nihilist uses entropic hand to deal damage to another creature, it inflicts a single condition on the target as per the rules for cruelty.

Channel Chaotic Energy (Su): As channel positive energy, except that the nihilist can only heal chaotic creatures or harm lawful creatures.

Spells: As the paladin class feature, except that the nihilist can choose to cast either cure or cause spells at the time he or she gains spells. At the GM’s discretion, certain deities may only grant one or the other to their servants.

Entropic Resonance (Su): At 11th level, the nihilist can expend two uses of smite law ability to lower the defenses of all enemies within 10 feet. The enemies take a penalty to AC, attack rolls, and saving throws equal to the nihilist’s Charisma modifier for a number of rounds equal to half the nihilist’s class level, rounded down. Chaotic enemies are unaffected by this ability. This ability replaces aura of justice.

Chaotic Certainty (Su): As aura of faith, except that weapons are treated as chaotic for overcoming damage reduction.

No Master (Su): At 17th level, a nihilist gains DR 5/law and immunity to compulsion spells and spell-like abilities. When subjected to such an effect, the nihilist can forgo immunity and make a saving throw. If the saving throw succeeds, the original caster must save against the same DC or be affected as if the nihilist had used the same ability. If the nihilist fails, he or she is affected normally. This ability replaces aura of righteousness.

Agent of Chaos (Su): As the holy champion class feature, applying all bonuses to the relevant alternate class abilities and rules given for the nihilist.

Code of Conduct: GM’s discretion. Other than the obvious rules of maintaining a chaotic neutral alignment and following a deity’s tenets, no two nihilists have the same code. Sit down with your GM and work out a code of conduct that fits your character and the campaign. General suggestions for such a code include being vehemently against a specific type of action or behavior, having a set of rules for personal discipline that can be easily arranged to fit most situations, and so on.

Associates: The only people a nihilist won’t travel with are those who continually try and force the nihilist to do something he or she doesn’t want to do.

Ex-Nihilists: As with all paladins, a nihilist who violates a code of conduct or ceases to be of the required alignment loses all class abilities and spells except for proficiencies. The nihilist may not gain any more levels in nihilist. He or she regains nihilist class features and may take additional levels in nihilist if he or she atones as per the spell.

The nihilist is a challenging class both to roleplay and to GM for, as I see it. It should not be allowed lightly, and it has the potential to cause a lot of problems with the story if the player is not mature enough to understand and keep to the right limits. That said, use these rules as you see fit. If they work for your campaign, great!  If not, well, it’s not for everybody.

I hope you’ve enjoyed this series as much as I’ve enjoyed writing it. If what I’ve given you in this series isn’t quite something you’d use, I hope it at least inspired you or gave you somewhere to start with your own modifications. I also hope to eventually hear about people using these ideas. Most of all, I hope to be able to share my ideas with you again, and soon. Until then, thanks for reading, and may your dice roll favorably.

3 thoughts on “The Paladin: Expanding the Boundaries of Faith, Part V”