Skip to content
Home / Delve into the Depths in the Kobold Blog / Trapmaster: Courage Triumphant 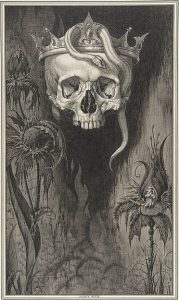 Mira raised a weary and trembling arm, blackened with corruption, and grasped the door pull. “Hopefully, I’ve gotten this right,” she muttered as she pulled with all her remaining strength…

Three doors block the way, a blackened iron pull on each. The three pieces of hardware are fashioned as grotesques—the ring pull dangling from the visages of horrific creatures rendered in hard metal. One pull resembles a spider with hundreds of eyes and wicked sharp mandibles; the second an alluring woman, her beauty marred by tiny horns and a sinuous tail which caresses her own neck; while the face peering out from the third pull can barely be seen behind a mass of snakes, a wild, unruly, and unnatural coiffure.

A verse carved into the threshold around the three doors reads:

Magical auras permeate all three pulls in each set of doors. The grotesques (and their banes) are recognizable with appropriate Knowledge checks should the players not identify them from their descriptions.

Safely negotiating the traps involves conquering one’s fears and pushing through the adverse effects in the proper order: succubus (level drain), spider (poison), and medusa (turned to stone). Opening and passing through the first two doors in the correct order, triggers each associated trap, but causes the medusa trap in the third threshold to ignore intruders. When tugging on the medusa pull to open the third door, the snakes animate and strike, restoring any ability and level drain or damage and neutralizing poison. A bypass lever on the far side of the third threshold disarms any remaining active traps. Different creatures may open the doors in the first and second threshold as long as they maintain the correct sequence.

Passing through the doors in the wrong order simply triggers the harmful effect and negates the healing boon, although if the first two doors used are the Spider and the Succubus, the Medusa in the third threshold continues to ignores intruders.

The traps can be disarmed independently, also negating any healing, as well as causing all three medusa traps (less any disarmed) to trigger simultaneously as a gaze attacks with a 15-ft. range once the third threshold is crossed.

Finally, while a creature can take any desired precautions before passing through the first door, once begun, actions taken to mitigate the ongoing effects of the traps neutralize the final boon of healing. 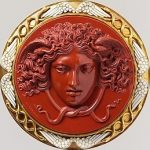 Trapfinding Synergy: Exceeding the Perception DC by 5 when examining the traps reveals that disarming them (or interfering with ongoing effects) dissipates the healing magic coursing through them, as well as strengthening the effects of the medusa gaze trap.

KISS OF THE SUCCUBUS TRAP CR 10

Trigger touch; Reset none
Effect spell effect (maximized enervation, 4 negative levels at a rate of one per round; never miss)

Trigger touch Reset none Bypass using doors in correct order – see text
Effect spell effect (persistent flesh to stone, DC 19 Fortitude negates; single target interacting with the door or (see text) multiple targets (all targets within 15′ of any armed medusa door pull); a creature can only avert their gaze, or hamper their sight if the trap is triggered against multiple targets.

Identifying the grotesques (and their associated abilities) by name is a DC 15 Intelligence check (arcana for the succubus, nature for the medusa and the spider). Detect Magic identifies the auras (identical to the Pathfinder auras), and a DC 20 Intelligence (arcana) check reveals that disarming the traps or interfering with their effects short circuits the healing magic coursing through them, as well as strengthening the effects of the Medusa Gaze Trap. The Tarantula trap deals Setback poison damage (Constitution save DC 15 halves) for 3 rounds, and can be disarmed with thieves’ tools and a DC 27 Dexterity check. The Succubus Kiss Trap works like a succubus’ Draining Kiss (DC 15), except it deals Setback psychic damage for three rounds and does not kill: creatures reduced to 0 hit points are comatose (unconscious condition) until restoration or a long rest. The Medusa Gaze Trap casts flesh to stone (DC 18); covering a door pull during the Saving throw sequence grants advantage on the saves. Both the Succubus and Medusa traps can be disarmed with a DC 22 Intelligence (arcana) check; Dispel Magic nullifies them ( each independently) with a DC 16 Spellcasting Ability check (vs. 6th level spells). The restoration and healing, if successfully triggered, reverses all damage suffered during the passage.

Identifying the grotesques (and their associated abilities) by name is a Normal task; disarming them is a Hard task, as is recognizing the detrimental effects of doing so. A character must have some arcane skills or knowledge to disarm the Medusa and Succubus traps; the tarantula trap can be disabled mechanically. The Tarantula trap deals Normal Single Target Damage (low dice) for 4 rounds; a Hard (16+) save, granted each turn, ends the ongoing damage. The Succubus and Medusa traps both make Hard Attack rolls vs. MD, deal Hard Single Target psychic damage and initiate Last Gasp saves vs. Death (life drain) for the succubus, and being turned to stone (Medusa). Allies can assist on these saves, but risk setting off still-armed traps to reach a character, and assisting nullifies the healing boon, which ends ongoing Last Gasp sequences and grants a free recovery for damage taken.

A 3d6 Intelligence check identifies the grotesques, and their abilities. Detect Magic, or a Delicate Tasks and Traps check reveals the magical auras and detrimental effects of disarming them. Dispel Magic (vs. a 12th level caster) destroys either of the Succubus or Medusa traps; a Delicate Tasks and Traps check suffices for the Tarantula trap. The Tarantula trap deals 2d6 poison damage once a round for 4 rounds (Save negates; a save may be made each round until successful). The Succubus trap grants one negative level (Save negates), while the Medusa trap turns the target (or targets) to stone (Save negates). The healing boon neutralizes ongoing effects, restores level drain, and cures 2d6+2 hit points of damage.