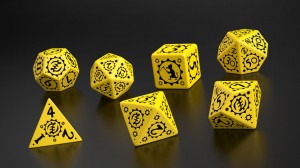 We have another exciting goal for you to join in on for the Southlands Kickstarter: dice! Come learn more about this goal through Marc Radle’s eyes (and words).

Like pretty much everyone who plays table top RPGs, I love dice. I mean, I really love dice! OK, I guess the truth is, I’m a full-blown, grade A, no apologies, Dice Geek!

When I was a kid, I had a big ol’ ratty yellow dice bag filled with my random collection of dice—they were all different colors, different finishes, some were transparent, some were solid, some were marbled—basically, if I thought the dice were cool, I added them to my dice bag.

Once I became an adult (well, at least in terms of age … other measures of adulthood are probably much more up for debate), I started to learn about different dice companies and different manufacturing methods. I also decided that I no longer wanted a big hodge-podge of dice—I wanted different sets of dice that each matched or coordinated in some way … all the same color, all from the same company, and so on.

Oh, and when I say “set,” I don’t mean a standard, single set of seven dice! Each of my four sets contain at least 40-50 dice: at least five or six d20s; seven or eight d4s, d8s, d10s and d12s and then, of course, lots and lots of d6s! And, of course, each set has its own awesome, Gallant Hand’s Gamer’s Gear brand dice bag—no more, dingy yellow dice bags for me!

Now, do I NEED this many different sets of dice? Of course not. Is it super awesome and cool in an uber-geeky sort of way to have this many? You bet it is! :)

So, with this all in mind, you can understand how absolutely, over the moon excited I am that we’ve finally revealed the custom dice stretch goal for the Southlands Kickstarter! I first proposed this idea to Wolfgang long before the Kickstarter launched, and there was plenty of back and forth to figure out all the various details. Once we decided that it was feasible, I came up with the design for the dice set and then worked with the fine folks at Q-Workshop to create the dice renders you see here. I can’t fully express just how badly I want these dice to become a reality! But first, we have to hit that stretch goal!!!! (did I mention I’m excited?)

So, I ask all my fellow dice loving gamer geeks out there—how AWESOME would it be to have your very own, limited edition, no one else at the table has them, sure to make your friends green with envy, set of Southlands dice????

10 thoughts on “Confessions of a Dice Geek”