Skip to content
Home / Delve into the Depths in the Kobold Blog / Dark Delicacies: Biting into Empire of the Ghouls 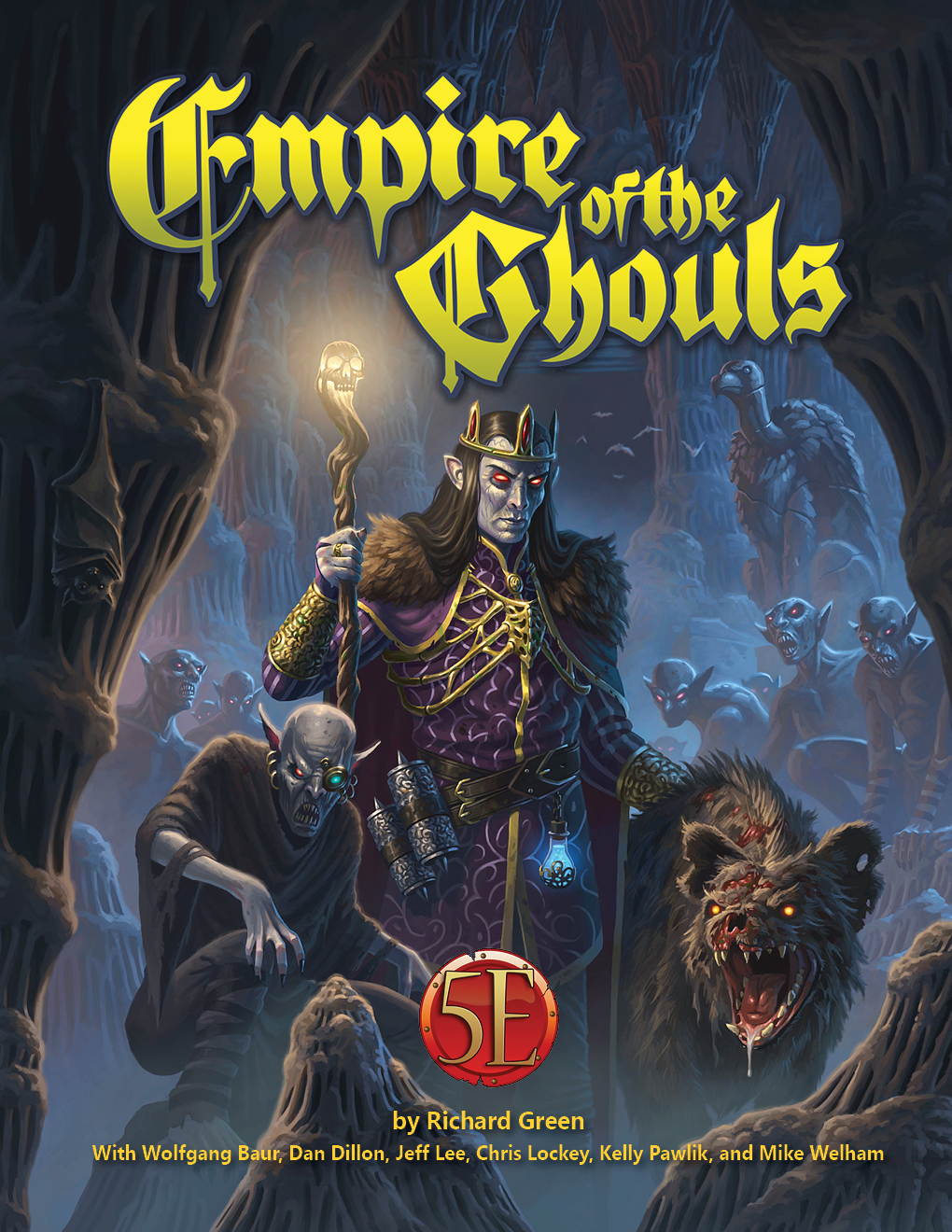 It was with a chill of excitement that I opened up Kobold Press’s latest offering. Empire of the Ghouls is the product I’ve been dreaming of since I first discovered the Midgard setting—a hardcover adventure, and one which takes PCs all the way from 1st to 13th level.

From lead designer Richard Green with contributions from Wolfgang Baur, Jeff Lee, Chris Lockey, Kelly Pawlik, and Mike Welham, this roughly 350-page hardcover volume is both an exhausting campaign guide to the ghastly Ghoul Imperium and Midgard’s first book-length campaign. Now, I knew going in that there would be lots of ghastly, ghoulish, grisly undead experiences waiting in this tome’s leaves. What I didn’t expect was what a marvelous world-of-Midgard-hopping experience I would get in addition to that. Empire of the Ghouls takes us on a whirlwind tour across the flat world of Midgard before we ever venture into the nightmarish Underworld with adventurers traveling across the Crossroads, journeying by Shadow Road to the Southlands, and returning to travel deep into the Northlands in a quest to stop the ghoul’s from gaining a magical upper hand on the realm of the living. As such, this isn’t just a great book for clerics looking to dish out some Divine Smite on some admittedly deserving walking corpses but also a fantastic introduction for everyone to Midgard itself and a demonstration as to why it’s one of the best campaign settings for D&D ever conceived. We get to see the wonders of the world but also deal with the international tensions, active war zones, courtly politics, diplomatic rivalries, and near-to-exploding “powder kegs” that make Midgard such an exciting place to visit. And in true Midgard fashion, the Ghoul Imperium isn’t a faceless empire marching in cold lockstep to a single drum but is itself rife with factions, rivalries, rebellious kings, diverse races, and disparate priesthoods all vying for their bit of pie—or rather, pound of flesh. In short, it’s near everything I love about Midgard crammed into one book.

The adventure kicks off in Zobeck—(where else?)—and this first episode is guaranteed to acquaint you with the city. I was thrilled to find it starts with one of my all-time favorite Midgard NPCs—Skirtal, the kobold culinary master and owner of the Rampant Roach! I think Skirtal is emblematic of what I love about Zobeck and Midgard—namely that the “monster races” that other settings treat as nothing but fodder to mow down are people here. Whether it’s gnolls in Per Bastet or kobolds in Zobeck or trollkin in the north, Midgard doesn’t treat any class of humanoid as wholly good or wholly evil, and while plenty of kobold’s might stab you in the back, Skirtal isn’t one of them, and the worst you’re liable to get off this scaly chef is indigestion. But the Rampant Roach is just the start of this adventure, not the end, and by the time the PCs have left Zobeck, they will have trekked all over the city, visited the dangerous and fascinating Cartways beneath the streets, entered the Zobeck catacombs, met with the Oracle of the Gear Goddess, and even encountered a Kobold King. Then it’s off to the dwarven canton of Grisal, those pious cheesemakers who’s city is claimed by both the elves of the Grand Duchy of Dornig and the vampire empire, the Greater Duchy of Morgau, but who stand as an independent city in defiance of both. Next, it’s off to Krakovar, that unfortunate country that recently fell to Morgau, and then a trip to the Free City of Jozht in the Wolfmark. Next, we’ll sail the Nieder Straits—never an easy voyage—then visit Reaver’s Cave in Wolfheim, eventually journeying as far as Huldramose in the Northlands (which may or may not include a visit to a World Tree!). There’ll be a visit to the ruins of the fallen dwarven empire of Nordheim, a trip to Siwal in the Southlands, and finally, spelunking in the Underworld, where the PCs will have to avoid appearing on the menu at the Pure City of Vandkhul. Along the way, the PCs encounter monarchs, attend feasts, partake in contests of strength and skill, engage in diplomacy and politics, brave the Shadow Roads, and of course thwart scores of horrendous undead in a quest to prevent the ghouls earning a magical boon from the dark god Vardesain that could allow them to run rampant over the overworld. But just like everything else in Midgard, the ghouls aren’t one-dimensional baddies but a nuanced, complex society with a host of competing perspectives, some of which border on sympathetic to the players’ goals. Of course, that doesn’t mean they won’t eat you.

The Kobold’s always stress the “portability” of their adventures for GMs looking to carve them up and set them elsewhere, and while I absolutely don’t get the appeal of setting Empire of the Ghouls anywhere but Midgard, there’s certainly plenty here that could be worked piecemeal into other settings if that’s your cup of tea, from dwarven cantons to elven ruins to Viking settlements to fungal gardens beneath the earth. And the new mechanic of “Grace Points” is something that would be of use to GMs anytime they need to track how a party is getting on with powerful hosts they’ll need to seek favors from later. There’s also a lot here that’s of use in other Midgard games, from shadow roads, Krakovar, and Underworld encounters to tons of world lore, to maps of plenty of key locations. I can see myself referencing the tables and information in Empire of the Ghouls before we’re ready to start the campaign as it will aid in my current Crossroads and Northlands games. Meanwhile, if you’re looking to expand this already-considerable volume, the accompanying Underworld Lairs booklet can even be used to extend the adventure after the storyline concludes. And of course, the hardcover concludes with a host of new magic items, spells, monsters, and NPCs that are useful far beyond this storyline. Finally, the artwork is beautiful, the artists and art director really having outdone themselves. And I have to say I love the new “Meet the Designer” sidebar at the end of each chapter that tells you who wrote what and gives a little love to the brilliant minds that helped Richard Green bring this amazing tome to life. It’s just an amazing package, a hellishly fun volume that’s knocked the Necronomicon out of the top spot for the number one book of the dead.

In short, Empire of the Ghouls looks like one of the most exciting book-length storylines to appear for the 5th edition of everyone’s favorite roleplaying game yet. I’m so glad I got my claws on it, and if you’re like me, you will grab yourself a copy and not let anyone pry it out of your cold, dead hands.

2 thoughts on “Dark Delicacies: Biting into Empire of the Ghouls”