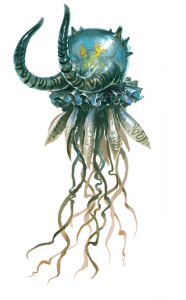 We’ve been very pleased with the positive reaction to the Tome of Beasts previews, even—maybe even especially—when readers point out places where we’ve added numbers incorrectly or overlooked a modifier. In a few cases, however, readers have called out features as errors that we don’t consider errors at all. Instead, they’re cases where our philosophy about monster design differs a bit from the principles that run through the Monster Manual. This article looks at the reasons behind some of those differences.

Fifth edition certainly has standards where monster design is concerned (I’m examining some of those standards in detail in my current Howling Tower series), but they’re looser standards than we’ve grown accustomed to in the previous two editions. Fourth edition in particular was especially rigid where monster numbers were concerned. Fifth edition doesn’t step all the way back to the ultra-relaxed monster design of the first and second editions, but it does put the focus back on a monster’s overall impact in the game instead of on micromanaging every facet of the stat block. We welcome that change with open arms.

A good analogy is a bank of volume faders on a sound mixing board. Each fader controls the volume of a narrow frequency band. By adjusting faders up and down, a sound technician can alter the sound drastically, but it still has an overall volume determined by all the faders working together. The overall volume is analogous to the monster’s challenge rating, while the settings on individual faders equate to the monster’s hit points, Armor Class, number of attacks, damage per attack, special abilities, and other traits. As with volume faders, increasing one number means either that the monster’s CR must increase, or something else must decrease to maintain the balance.

If we can stretch this analogy a bit further, the mixing board produces the most pleasing sound when the faders are set in a smooth arc. Extreme differences in the settings produce a harsh or jarring sound. Likewise, a monster whose numbers stay within a few notches of the same challenge rating is smooth and predictable in play. A monster with widely varying numbers—extremely high offense but low defense, for example, or very high AC but low hit points—is unpredictable. Lucky PCs might bring it down with just a few blows and suffer little or no injury in return, while unlucky characters could suffer terrific damage in an otherwise identical encounter.

All of that should be obvious to anyone who’s played much D&D. What might not be obvious is that some monsters are unpredictable on purpose. A monster with an offensive CR of 12 and a defensive CR of 4 isn’t necessarily a mistake or bad design. It could be an ambusher intended to gain surprise and land one or two devastating blows before characters cut it to pieces, or it could be a creature that characters are meant to approach cautiously or to expend long-range resources against after spotting it from a distance.

In cases like these, a creature with the numbers mentioned above (offensive CR 12, defensive CR 4) might not be assigned the expected overall CR of 8. Standard CRs are based on the creature participating in 3 rounds of combat. A creature that’s expected to last only 1 or 2 rounds is less dangerous, while a creature that lasts 5 or 6 rounds is more dangerous (assuming it hits as often and as hard as it should). Their CRs need to be tweaked accordingly.

Another area that causes some concern among readers is durations of monster powers that allow a saving throw. In the Monster Manual, some effects have a hard time limit (1 minute, for example) and some don’t, but most allow a character who falls victim to an ongoing effect to repeat the saving throw every round and end the effect with a successful save. In the Tome of Beasts, we’ve shied away from that approach in favor of random durations, such as 1d8 rounds, without repeated saving throws.

Why would Kobold Press do that? It has to do with a difference in opinion about certain aspects of game design and a difference in philosophy over the role of probability.

The DCs for most monster saving throws are in the low- to mid-teens. Most characters have a bonus of some kind on their saving throws, and bonuses of +6 or more on the most important saves (Dexterity and Wisdom) aren’t uncommon. Consider a character with a +5 bonus trying to make repeated DC 14 saving throws against an ongoing effect (not a one-time, half-damage save) such as psychic incapacitation. The odds that the character suffers X rounds of incapacitation are summarized below.

In only 1 out of 5 cases is this character affected for more than 1 round. In other words, the character is effectively immune to the attack. Since the effects we’re talking about tend to be monsters’ big guns—attacks limited to 1/day or to a 1-in-6 or 1-in-3 recharge roll—giving characters repeated saving throws knocks the legs out from under those monsters and contributes enormously to the sense that certain monsters are pushovers in combat despite having high CRs. Those high CRs are based on attacks that look devastating but wind up having little impact in play.

Philosophically, we prefer to treat a saving throw as a one-time chance. A character either resists, or he doesn’t. Once a saving throw fails, the full effect of failure kicks in. Second, third, and fourth chances are for the weak.

In most cases, anyway. Some monster powers in Tome of Beasts do allow repeated saving throws to end the effect, because sometimes that’s more appropriate than a random duration. We like the flexibility of having both approaches on the table. GMs who dislike random durations are encouraged to replace them with repeated saves, as long as they understand they’re weakening the monsters by doing so.

A few other items fall under this catch-all category.

Social Skills. Some monsters in Tome of Beasts are conversions from earlier editions of the game, and some of those earlier versions include skills that disappear from their updated stat blocks. This is especially true of skills that affect characters’ reactions. It seems more in line with fifth edition’s approach to let players choose whether their characters are intimidated or persuaded, based on circumstances and roleplaying, rather than allowing a die roll to control their attitudes. Deception appears occasionally—some monsters are built around it, and its use is easier to justify than Intimidation and Persuasion.

Creating monsters for tabletop RPGs involves a mix of art and science. Recent editions have veered strongly toward science, but fifth edition swings the needle back toward the central balance point, where we’re happy to see it. We look forward to reading your comments on this article and on the Tome of Beasts previews. 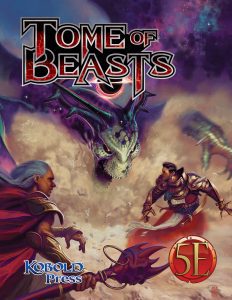