Skip to content
Home / Delve into the Depths in the Kobold Blog / Heroes of Nuria Natal: Gravebinder 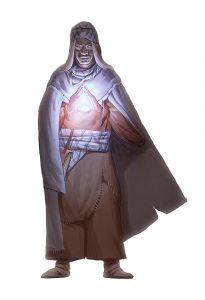 Oh, the lands of Nuria Natal! Where gods walk and men think it nothing to seek immortality. Where riches abound and fortunes are to be made in markets and in ancient tombs. Where the dead walk and the sun bakes. Nuria Natal is a land of wonders, whether you are a native or just passing through. Contained herein are options for characters who would explore Nuria Natal and the rest of the Southlands. They work best when coupled with Southlands Heroes.

You are a necromancer who has used your knowledge for a far different purpose. Sometimes called a white necromancer, you stand as a guardian between the living and the dead. Often acting as guardians for tombs and burial grounds, your order makes sure the dead stay where they are put. Should they fail to do so, you are ready and willing to deal with them. This feature replaces your chosen Wizard school.

Like other necromancers, beginning at 2nd level, the gold and time you must spend to copy a necromancy spell into your spell book is halved.

At 2nd level, you gain the ability to feel undead around you. This ability works like the spell detect good and evil but only works on undead and is always active.

At 6th level, you become more adept at hurting undead.  You may sacrifice a spell slot to do radiant damage to one undead you can see within 30 feet. The creature must make a Charisma saving throw against your Wizard spell save DC or suffer 1d6 radiant damage per level of the spell sacrificed.

Beginning at 10th level, you have resistance to necrotic damage, and your hit point maximum cannot be reduced. You have spent so much time around the dead and undead you have become inured to their worst effects.

Starting at 14th level, you can use your action to create an area of effect with a 30-foot radius. All non-evil creatures have advantage on all saving throws made against undead spells and abilities. Additionally undead are at disadvantage on all attacks. You can do this once per short rest.