Skip to content
Home / Delve into the Depths in the Kobold Blog / Creature Codex: Doom Golem 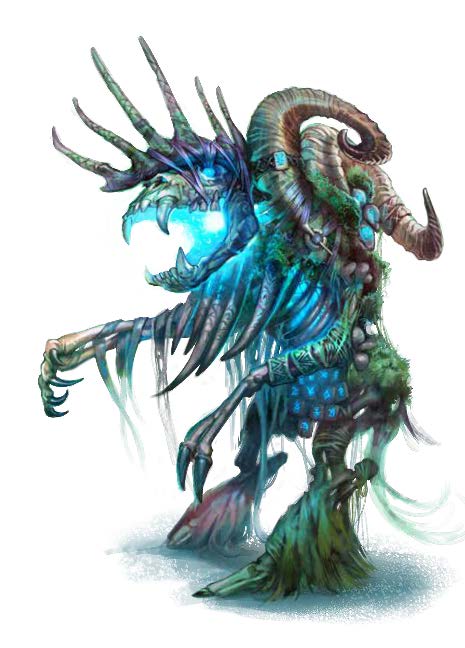 One hears a doom golem long before one sees it; a wailing of despair, a whisper of fate, like a lesser incarnation of death itself.

Winter Bound. Made of antlers, bone, and steel infused with winter spirits of death and destruction, doom golems are the creations of evil wizards and doomsday cults. They invariably include a hangman’s rope, bones of an animal sacrificed to a dark god, and the captured final breath of a man sent to die in exile. A doom golem is animated by a trapped spirit of the arctic, which flees with a howl when the golem is destroyed.

Glowing Bones. The golem’s inner core glows blue, making it easy to see a doom golem after nightfall. Their bone frameworks are sometimes built with polar bear skulls or white dragon bones, and many have a pronounced hunch in their posture.

Chorus of Fear. A doom golem’s clattering bones make noise to terrify foes. Animals find the sound disquieting, but demons, goblins, and other creatures of evil are delighted by the ominous tones.

Immutable Form. The golem is immune to any spell or effect that would alter its form.

Magic Resistance. The golem has advantage on saving throws against spells and other magical effects.

Multiattack. The doom golem makes one bite attack and one doom claw attack.

Wind of Boreas (Recharge 5–6). The doom golem releases an arctic wind in a 15-foot radius around itself or in a 30-foot cone. Each creature in that area must make a DC 16 Constitution saving throw, taking 38 (11d6) cold damage on a failed save, or half as much damage on a successful one.

Doom Upon You. When a creature the doom golem can see within 60 feet of it hits it with a spell or attack that requires a ranged attack roll, the doom golem strikes the attacker with a doom bolt. The doom bolt is a shadowy reflection of the original attack, using the same attack roll and effects as the original, except it deals necrotic damage.