Skip to content
Home / Delve into the Depths in the Kobold Blog / Creature Codex: Nightgaunt 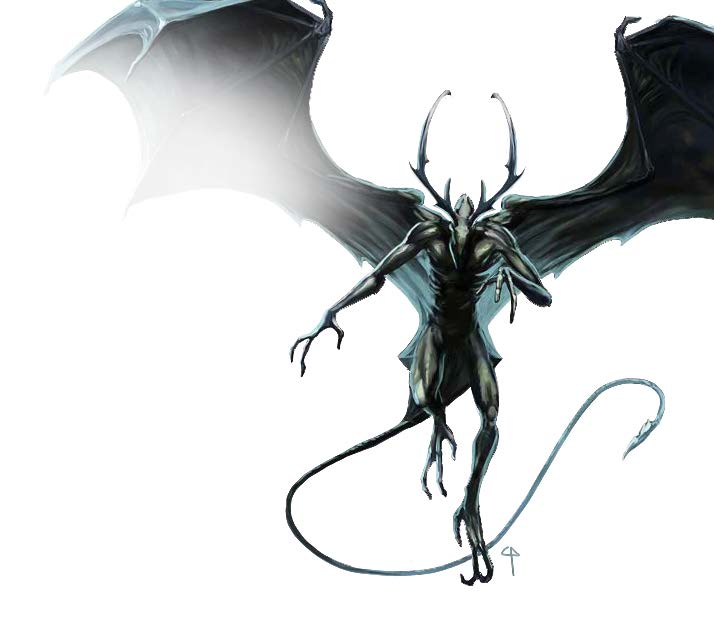 The terrible outline of something noxiously thin and bat-winged descends silently from above—a faceless black being with smooth, whale-like skin and horns that curve toward each other. Its barbed tail lashes needlessly as it clutches the air with ugly prehensile paws.

Silent Malevolence. Nightgaunts never speak or smile, having only a suggestive blankness where a face ought to be. The beating of a nightgaunt’s membranous wings makes no sound; nor does the tickling grasp of its cold, rubbery paws.

Nightmare Servitors. These mindless aberrations are creations of an elder god of the Great Abyss, who wages inter‑dimensional war with various gods and horrors of the Outer Void. Nightgaunts serve as the advance guard and battle steeds of the ghouls that inhabit the darkest corners of the Shadow Realm and realms of pure dream and fancy. On occasion, they ally themselves with humans and the forces of light against greater chaos and particularly hated demon lords. Such alliances last only so long as is necessary to restore the rule of law and burn out all corruption from a place. Once this is accomplished, they sometimes leave, satisfied in their work, and other times remain to attack the wounded forces of good.

Flyby. The nightgaunt doesn’t provoke an opportunity attack when it flies out of an enemy’s reach.

Pack Tactics. The nightgaunt has advantage on attack rolls against a creature if at least one of the nightgaunt’s allies is within 5 feet of the creature and the ally isn’t incapacitated.

Magic Resistance. The nightgaunt has advantage on saving throws against spells and other magical effects.

Utterly Silent. The nightgaunt doesn’t make a sound and has advantage on Dexterity (Stealth) checks.

Clutching Claws. Melee Weapon Attack: +8 to hit, reach 5 ft., one target. Hit: 13 (2d8 + 4) slashing damage, and the target is grappled (escape DC 16) if it is a Medium or smaller creature. Until this grapple ends, the target is restrained. The nightgaunt has two claws, each of which can grapple only one target. While using a claw to grapple, the nightgaunt can’t use that claw to attack.