Skip to content
Home / Delve into the Depths in the Kobold Blog / Howling Tower: Apocalypse or Post-Apocalypse? 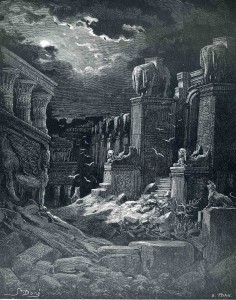 All my favorite RPG settings are either apocalyptic or post-apocalyptic. Yours probably are, too.

Is that a surprise? Take a moment to think about it.

The most obvious footprint of the apocalypse is the ruins it left behind. When was the last time you saw an RPG campaign map that didn’t have a symbol for ruins in its key?

Somewhere in the Gazetteer there will be a discussion of the empires that rose and fell in the centuries leading up to the current era. The causes for their downfalls always involve megawar, anger of the gods, or techno/magical calamity on an unimaginable scale—assuming the place wasn’t just overrun by zombies.

The fact is, an apocalypse has much to offer a world of adventure.

It’s the ultimate adolescent fantasy. Every bored kid in high school daydreams about surviving the Big One and taking command of a world without grownups, homework, and rules. It’s part escapism, part wish fulfillment, and part revenge fantasy—the bullies, popular kids, and coaches all were smashed into jelly by the rain of meteors or eaten by dinosaurs (it’s my apocalypse, so I can have dinosaurs). Most RPG players get started as adolescents, so it’s only natural that those teenage fantasies loom large in our tabletop fantasies. A world in collapse is a smorgasbord of freedom and opportunity where bold adventurers can take what they want and live according to their own rules.

There’s a precedent. We already live in a post-apocalyptic world. During those history classes when you were drawing dungeon maps instead of paying attention, the teacher spoke for hours about the rise and fall of societies, civilizations, and dominions. The Dark Ages, the default model for most D&D settings, are what was left after the destruction of one of the longest-lasting, most accomplished, most powerful empires ever to decline and fall. For centuries, peasants dragged their turnips to market over Rome’s decaying roads, decorated their crude castles with its magnificent sculpture, and filled their cracked water jugs from its colossal, crumbling aqueducts. No sooner did Europe claw its way up to the High Middle Ages than its very own horseman of the apocalypse, Pestilence, gruesomely slaughtered half the continent’s population in a generation. A century and a half later, Europeans brought their unique brand of apocalypse to the New World when they toppled empires with the sword, the cross, and the microbe.

Dungeons! Extensive yet mysteriously abandoned subterranean building complexes don’t play starring roles in every campaign, but where they do, they scream “apocalypse!” Why would anyone construct something like that? For the same reason 20th Century Americans dug fallout shelters beneath their gardens and hollowed out Cheyenne Mountain—to survive Armageddon. We give tours of the Cheyenne Mountain nuclear bunker now, but if we turned our backs on it for a few years, I have no doubt that it would be crawling with kobolds and umber hulks before anyone knew what was happening.

Downfall is the prelude to redemption. All stories with happy endings achieve some sort of renewal or rebirth. Killing the monster, vanquishing evil, and completing the quest are not enough. If the hero or heroine doesn’t return safely home to be reunited with the one person they love and continue turning the wheel of life, their ending will be bittersweet at best. Our roleplaying heroes seldom experience the type of personal growth and realization of characters in novels or films, but as players we still crave it as part of the happy ending of the successful hero. We have been conditioned to it by a thousand-year tradition of storytelling that relies on that standard form.

If the characters aren’t likely to complete that cycle of renewal in themselves, the world might. An engaging RPG world is like another character in the campaign. Players can get the same satisfaction from its rebirth as they might from any protagonist’s. The world doesn’t need to be rescued from imminent, universe-ending peril to be saved in the end. Halting its slow slide toward chaos and putting it back on the long road toward renewed civilization can be just as satisfying.