Skip to content
Home / Delve into the Depths in the Kobold Blog / Book Review: The Sentinel, The Sundering Book V 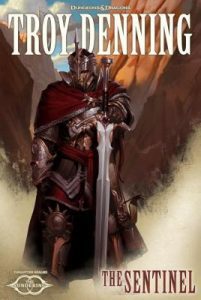 Kleef is a watchman in the City of Marsember. Though the watch is corrupt and ineffective, the “good” news for the people of Marsember is that they don’t have to worry about that much longer since the city is on the eve of being overrun by the Shadowvar. Kleef and his patrol are monitoring a strange man and his beguiling traveling companion when he discovers that a Shadowvar agent is tailing them. Kleef springs into action to intervene, and, in doing so, he ends up in a running battle with multiple Shadowvar who seem hell-bent on capturing and killing this odd couple. During this battle that rages through streets choked with refugees fleeing the city, Lady Arietta (who just happens to moonlight as a common bard in many of the taverns of the city) witnesses Kleef holding off his shady foes and decides to insert herself into the fight. By doing so, she not only places herself in danger, but her family as well. Kleef learns that not only is the sword that his father handed down to him more powerful than he thought, but that the odd couple that he saved are chosen of the goddess of love (Sune) and the god of death (sort of). If that wasn’t enough, the odd couple—Joelle and Malik—have an artifact that must be delivered to a place that to a common watchman like Kleef exists only in legend. Talk about a rough day at work.

On the surface, this story seems like your typical hack-and-slash/save-the-world kind of fantasy novel, but I think that Mr. Denning was digging much deeper and addressing some much loftier concepts when writing this novel. I feel like he addressed those concepts, but with mixed results. The overall plot is what some people would call classic D&D fantasy: the party meets up, the party resolves several conflicts, the party does something with an artifact that could save or destroy the world, and the party members learn something about themselves in the process. As is to be expected from Denning, we have some well-written fight scenes.

The storyline might have felt almost typical, because I feel like Denning was focusing on the characters. Sure, trying to protect a strange pair that has a world-changing artifact is epic, but it has been done many times before. I think the best way to approach this review is with a quick rundown of the characters. Kleef is a watchman, and all his life he has worshiped the dead god Helm, like his father before him. Normally, this isn’t a big deal, but it is kind of hard to worship the dead god of honor and duty when you live in a corrupt society like the one in Marsember. To make things worse, Kleef’s father died “in service” to Helm with no apparent reward. Additionally, he wields his father’s sword Watcher, which is much more powerful than he ever expected. At the start of the novel, Kleef is what you would call a typical fighter with a code that he tries to abide by. As the story progresses, Kleef learns just how questionable his faith in Helm really is. I found this aspect of Kleef the most interesting: Kleef starts the story not knowing that he is one of the chosen of Helm, and he feels like he is just a normal guy with a few questions about his faith. As the story progresses, he learns that he is chosen, embraces it, but soon realizes that that isn’t always enough.

Lady Arietta experiences an almost exact opposite experience since she has been led to believe that she is the chosen of a god and isn’t. As a noble who masquerades as a commoner, she has more empathy toward commoners than most of her stereotypical peers, and most of the nobles in this story are cardboard cutouts that could be in any fantasy story. Arietta suffers her own crisis of faith just as Kleef did, but it is a bit more of a rollercoaster ride. This story ends up as you think it should, but the journey is interesting to watch.

Malik, the chosen of the god of death (but actually another god—you will figure that out quickly in the book), was as loathsome as you would expect. I did enjoy the fact that he wasn’t apologetic about who he was or what he did. Even if I found his faith repulsive at many times, it was a faith that he practiced. In a very strange way, one could argue that he of all of the characters had the most faith in his god, even if that faith was born of fear. Malik was a necessary evil and provided a great counterpoint to the other characters in the “party.” The fact that he was in love with Joelle, the cleric of Sune, made him more human, but no less loathsome.

Joelle, the chosen of Sune, was actually one of the most complicated and interesting characters in the book for me, because she is the chosen of the goddess of love. People have been trying to describe love for as long as humans have been around, and, while I can’t describe love based on what I read in this book, I can say that I feel like its alignment is chaotic neutral. Love is always complicated, and this story really brings that fact into focus. Joelle is much more than she appears, too. She knows how to use her god-given gifts to get what she wants and to accomplish the missions her god sets her on. During the course of this book, she falls in love with one of the other characters, who does not reciprocate in the way she would like. While not overtly stated, this book does ask the tough questions of what lengths you will to go to for love and what will you do for love, plus deals with the different types of love.

Even with the old standbys in place and in full force, Denning livened things up and threw a few curve balls in the process. If you are looking for pure hack and slash, this novel will be enough of that to get you to the end of the book, but you might still feel like you need dessert. If you are looking for good action interspersed with some interesting questions about the nature of faith and love, then this one is completely for you. I am excited to read the conclusion of this series to see exactly what the future of the Realms will look like.

1 thought on “Book Review: The Sentinel, The Sundering Book V”