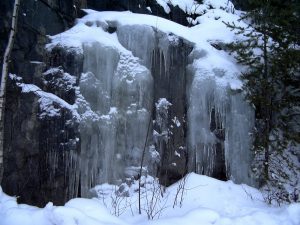 Each year, the self-proclaimed “icicle fey” named Sinthia ventures to the small village of Frostbite to start the Icicle Festival, which begins on the last day of the year. She brings with her a large collection of icicles that contain all manner of treasures. The icicles are not clear, though, so you don’t know what is hidden within the ice until the spring thaw comes along. It takes her about a week to distribute, thoughtfully, her collection of icicles from her magical icicle cart to inhabitants of Frostbite. Only those who lived in this village for a year and a day may receive one of these icicles. Sinthia takes a day of rest and merriment before she begins distributing her gifts.

In return, the villagers send her back to her home with practical things, plus some unusual items that she requested the year before (the blood of a chimera, a medusa’s snake, and more).

This year, though, Sinthia hasn’t come down from the mountain yet. The villagers of Frostbite are worried, and they seek help in ascertaining what has happened. Do your hearty adventurers choose to take on this challenge?

What follows is a d12 table of what might have happened. You may pick one thing from it (or even more if you can spin a story around them) or roll:

When the adventurers have rescued the icicle fey, you may use the table that we’ll provide tomorrow to determine what their prizes are—for Sinthia will indeed grant each of the PCs their very own icicle gift!