Skip to content
Home / Delve into the Depths in the Kobold Blog / Book Review: The Herald—The Sundering, Book VI 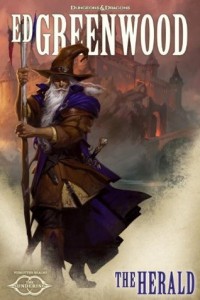 In The Herald, the final book of the Sundering series, which heralds the latest edition of Dungeons & Dragons, we see the popular world of Faerûn being torn apart by the ambitions not only of Shar, the evil goddess of darkness and mystery, but also by ambitious beings who would like nothing more than to ride the coattails of her power or to establish power bases of their own. One such group signing up for a ride on those dark coattails are the Shadovar. They are hatching nefarious plots across the world, including attacks on the magical wards of the famed repository of Candlekeep and the ancient elf city of Myth Drannor. They seek to consume all of the powerful magic contained at both of these locations so that they can sunder the world. In the center of the maelstrom of chaos, Mystra, the goddess of magic, has withdrawn from the world, leaving Elminster as her champion to maintain the Weave, which is what binds Mystra’s magic to Faerûn.

Elminster has reunited with old allies and brought along some new ones to try save magic in Faerûn. He hopes they can stop Shar and her agents from destroying everything that he holds dear.

So, here we are, at the end of this all-star reunion known as the Sundering. Wizards of the Coast wisely saved Ed Greenwood’s contribution to this series until last. Greenwood understands the way magic works in the Forgotten Realms, because he is the one who created the entire world and most of the rules that govern it. As you can tell by my pitiful synopsis, the way magic works was kind of a big deal in this book. His intimate knowledge and writing skills made some of the high concept magic theories presented in this book easy to understand without diluting the mysteries of that magic.

As with all the other books in this series, Greenwood dusted off not only Elminster, but many of what I like to call the magnificent seven (chosen of Mystra, but chosen way before all of these other chosen showed up), Manshoon, and even Mirt. There were moments where my heart swooned to see some of these beloved characters again and conversely there were moments when I wished they had stayed hidden. Elminster really was the only person who could have pulled off what needed to be done to try to save magic and possibly the world. I won’t tell you the end, but if you have read any books about the Realms, you can probably figure out how this one ends.

This story does shift locations and has many moving pieces. If you have not been reading the books in this series, then at some points you will be confused. For those who have been following the series, you should have a good idea of what is going on, but pay attention, because some of Greenwood’s transitions are abrupt.

In terms of the locations I mentioned above, I have known about Candlekeep for decades, but I feel like this book let me into the secret door and gave me the dollar tour. Candlekeep is much like a glacier: More lurks below than you see above. Combine this with the keep’s legendary wards and the vast amount of knowledge that is contained therein, and you have a wonderful playground/battleground for the forces of good and evil.

Myth Drannor is just as storied and… wait for it… mythical as Candlekeep. The forested city of song has been the backdrop for hundreds of stories and subplots within the Realms over the years. Through my computer and several times as a character, I have had the chance to explore the ruins of this elven location, and seeing what Greenwood did with it and to it in this book was great. Sometimes, though, I physically winced when reading passages about the fight for control of this famed city, but it is times like that when you know the author is doing something right.

As for characters, I would go deeper into the ones involved in this story, but I would rather you just read the bazillion books that they appear in or are written about them. I must say that there was one point in the book when I felt like Greenwood did not stay true to Elminster. I understood the incident was a plot point that moved the story along, but it was very un-El-like, and no amount of explanations after the fact will convince me otherwise. You don’t become a chosen of Mystra and live for thousands of years by making mistakes like that.

The ending of this book was predictable, but fun. I guess it really was the only way you could end a series as game-changing as this one has been. I am excited to see how this series leads us into D&D Next, and what stories we will read in the future. I have enjoyed the Sundering journey—I had a chance to catch up with some old friends and meet a few new ones. At times, I felt like the authors really pushed things to explain where their favored characters were and what they were doing for the last few years, but if that is my biggest complaint, then Wizards can chalk not only The Herald, but the entire Sundering series as a success.