Skip to content
Home / Delve into the Depths in the Kobold Blog / Penny Dreadfuls: Stealing the Spotlight 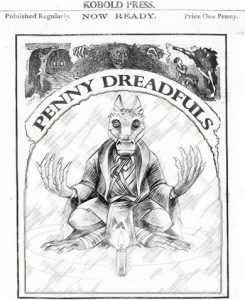 How Actor Prep Can Level Up Your Roleplaying

Like many roleplaying game enthusiasts of (ahem) a certain age, I have fond memories of cracking open the board game Dungeons & Dragons for the first time; some of the formative years of my adolescence were spent dreaming about the heroic exploits of heroic fighters, elves, and dwarves in long-forgotten tombs. But it wasn’t until college that I really gained my love for dungeon delving and pretending to be an elf.

I was a Theatre major—a dramaturg and director who dabbled in acting. My collegiate gaming group was, naturally, composed of other Theatre students. Our GM John Wright was a professional playwright and director earning his PhD, and all of my group’s players had taken at least two years of acting courses (including improvisation) before joining. The games were spectacular—deeply plotted, engagingly performed, and filled with plot twists and characters that all of us still reminisce about ten years later.

People would ask to watch us play and enjoyed the spectacle of our games—which, if I’m being honest, is a minor miracle because I was one of the players. Although I’d read tons of books about acting and taken numerous classes, I was much better at the theory of acting than putting that theory into practice. It turns out all I was missing onstage was a d20—I was a crappy actor, but RPGs allowed me to put that theory into practice in ways that I simply couldn’t do when I wasn’t rolling dice to eviscerate a hook horror. To this day I’m still performing once a week—and even though I’m not creating Hamlet each week, my actor training has improved my gaming.

There’s no reason why others can’t do this, too. You don’t need to be a graduate student in theatre to consider the theatricality of gaming—and you certainly don’t need to be a professional actor to engage more deeply with your character. Theatre preparation is something everyone who games can use. Employing these three actor’s tricks can unlock your inner Olivier—if only to let you kill him and take his stuff.

How do you, a person in the 20th century, get inside the head of a character who lived hundreds or thousands of years ago? For actors trained in Method, you employ “the Magic If”—in other words, you imagine what it would have been like. Although those of us in the present cannot shed certain things about ourselves and never truly know what it would be like to have been raised under other conditions, for an actor, careful and focused imagination can help bridge the gap. The same goes for experiences that are difficult to replicate—although many plays involve murders, very few actors have killed another human being.

“The Magic If” can be extremely useful for gamers in large part because many of the best roleplayers I know already use this technique. The entirety of our hobby involves the active use of the imagination—especially since most of us have never cast time stop in real life or swung a sword at an orc.

Many people, when they come to the theatre, praise acting only when they notice an actor doing something difficult—crying on command, delivering a thunderous soliloquy, or dominating a scene with their physicality. But for actors, these show-stealing moments are never about their character. Rather, these show-stealing moments are entirely the result of the actions of the other characters: the tears aren’t the result of an actor deciding to cry but because another character hurt him or her; that thunderous soliloquy occurred only because someone else said something that demanded a response; and that physical thrashing happened because another character pushed that actor’s character over the edge of civility. When you’re reacting on stage, the scene is never about you—someone else is so important to you that they make you respond.

In gaming, I personally find it much easier to react to the GM’s world and the other characters than to come up with a fully realized person. In my last 13th Age game, I played Thistos, a demi-god enslaved by the Archmage and used as an arcane battery for one thousand years. Thistos escaped the prison severely reduced in power; my character came from an Age that was lost, knew nothing about the world around him, and embraced a different moral code than the other player characters to account for societal differences. I had no freaking clue how to play him. Luckily this wasn’t all that big of a deal. Instead, I focused on the fact that my character was part of a fictional world, and I found my character’s voice through what the other PCs and gamemaster gave me to react to.

An actor’s motivation is the reason why his or her character is doing a given thing on stage. In a realist play, the world is rational and proceeds causally. Every action is caused by something else; the plot is what happens when one traces the chain of causation backward and forward in the timeline of the play. Every character, in every scene, has a “super-objective”—also known as a thing that they want. They take different actions to accomplish that thing that they want—their “tactics”—despite the fact that others are preventing them from getting the thing that they want, which provides the scene’s “conflict.” A good actor sees a character for what it is: a driven human being that has goals and the will to achieve them despite adversity.

The most memorable characters I’ve played and GMed were all defined by their desires. Every adventure brought them one step closer to their goals, and every choice they made was a function of what they wanted. A strong objective can become a touchstone for a character—the character’s desires helped the players decide how they would react to a given situation, and allowed these players to use their imaginations to create a character that felt like a hero (or villain).

Obviously, I could go on and on about various ways gamers can appropriate techniques popular in the theatre to make their gaming better. Even by limiting this to three distinct concepts I’ve blown way past 1,000 words. Should commenters like this concept, I’m happy to revisit this topic in a future column. Cheers!