Skip to content
Home / Delve into the Depths in the Kobold Blog / Ask the Kobold: Were-bonuses and Laughable Actions 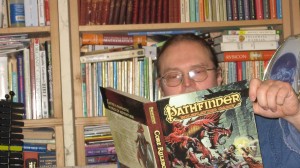 Need clarification on some mechanics in the Pathfinder Roleplaying Game? You’re in the right place. Take a seat with veteran game designer Skip Williams.

Not sure how a spell works? Curious why that monster does what it does? Trying to get your feats to play nicely together? Skip has the answer.

Post your new questions for Skip about the Pathfinder Roleplaying Game in the comments below. Whoever gives us the best question will win a Kobold Quarterly pdf subscription (or pdf gift subscription)!

“And if you gaze for long into an abyss…”

Q: The listing for lycanthrope ability score adjustments in Pathfinder confuses me. The rules say to apply some flat bonuses (+2 Wisdom, -2 Charisma in all forms; and +2 Strength, +2 Constitution in animal/hybrid forms). However, they also say that, when in animal or hybrid form, the lycanthrope uses the highest of either his own stats for the base animal’s…

Q: Just when can a character afflicted by a hideous laughter spell attempt a saving throw to end the spell? What can the character do when afflicted with the spell? The spell description says “no actions.” What does that mean? Is the subject unable to use standard actions, move actions, or all actions? As worded, it could mean no yelling of messages to an ally since that’s a free action.

When a hideous laughter spell strikes, the subject can attempt a Will save to negate the spell. This is not an “action” but a normal part of resolving the spell. If the save fails, the subject is afflicted with gales of laughter and falls prone. The subject isn’t helpless but can take no actions. In this case, an “action” is anything shown on Table 8-2, including non actions such as taking a 5-ft. step and any free action not specifically shown on the table (more on this in the sidebar). The subject does nothing but laugh and cannot communicate with foes or allies. You can think of the spell as forcing the subject to use a full-round action each round to laugh, but with no additional activities (such as free actions) tacked on.

The list of action types in the combat chapter, along with the text that accompanies it, does a pretty good job describing just what a character can do when the pressure’s on. There’s nothing in the rules, however, that spells out just what an “action” is. Here’s a working definition:

In game terms, an action is any activity a creature initiates that allows it to interact with or alter the game world in any significant way. This includes anything defined in the rules as a standard, move, full-round, free, swift, or immediate action. It also includes any act of will that moves the creature from place to place. If you cannot take actions, you cannot take a 5-ft. step.

Certain very important game activities are purely reactive and are not “actions.” These include making saving throws and mounting a combat maneuver defense. For example, since you’re caught unaware when a battle starts, you cannot act during the surprise round that begins the battle. You can, however, make saving throws and defend against combat maneuvers when surprised.

Some conditions might preclude some defenses. For example, you probably can’t resist a grapple if you’re paralyzed.

4 thoughts on “Ask the Kobold: Were-bonuses and Laughable Actions”