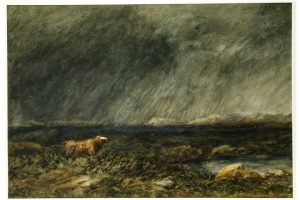 After reading the previous three articles, you now know how to describe things to elicit fear, you have learned how to make a monster frightening, and your players have a group of characters with their own unique fears. Now all you need a spine-tingling place for them to explore and adventure in.

This is the easiest aspect of designing and running a horror-themed adventure or campaign. The fantasy middle-ages are filled with haunting locations that the common people mention only in hushed whispers. People’s superstitions and beliefs exaggerate even the most mundane places over the hill into terrifying and forbidden ones. All you need to do is to make sure these places live up to their gruesome reputations.

To give you something specific to work with, here are four locations with adventure hooks that are perfectly suited to horror-themed adventures.

1. The Gothic Manor. This is a staple of horror fiction and is perfectly suited to a dungeon-crawl style game. A manor holds all the features that a dungeon does (hallways with doors, specific rooms, hidden treasures, and so on) but each part is purposely built and intended to be functional. This mundane functionality makes added horror elements stand out all the more: traps, monsters, and life-or-death situations are expected and common in a dungeon, but in a manor they stand out.

Manors, abandoned or otherwise, are meant to be lived in. The players could be visiting or checking in on a long lost relative or friend. They could be invited by an eccentric NPC. Failing that, manors are almost always possessed by the rich, but hold none of the usual defenses of a castle, so they’re perfect for treasure hunting.

2. The Abandoned Church on the Hill. Churches and temples make for great horror-adventure settings due to the foreboding atmosphere they provide: statues, altars, religious iconography, and the eerie feeling that comes from having your actions scrutinized by an almighty deity. For those who are not religious, a church or temple can feel incredibly alienating and strange. For more pious characters such as clerics and paladins, a temple or church devoted to an evil (or at least opposed) deity can be just as unnerving.

More than any of the other locations listed here, the abandoned church is the perfect place to stash an element important to the story: a holy relic from a bygone age, hidden in the catacombs beneath a long forgotten church. Other reasons to brave an abandoned church include performing a holy rite to cleanse the place of evil (ghosts, demons, devils, and so on), delving beneath the church to recover ancient holy treasures, or seeking some forgotten piece of lore or information that’s crucial to the campaign.

3. The Sewers No One Will Enter. Nothing is quite as vile, repulsive, and off-putting as a sewer, which is a dark, dank network of filth-ridden tunnels that are easy to get lost in. The stench of waste and decay saturates every part of it, making it a place only the most foul creatures will call home. This is a location that’s perfectly suited to a singular monster, or swarms of smaller monsters, since the long and interconnected tunnels are perfect for chases.

Sewers are unlike other kinds of mazes in that they serve a specific purpose: conveying people’s waste and waste-water. When something goes wrong with them, a city usually has people to take care of it. When those people never return, or are found dead and mutilated, that’s when the player characters might be called in. Sewers are ideal for monster hunts and extermination-themed adventures; the only thing keeping the players there is their desire to see a job finished, get paid, and maybe figure just what kind of monstrosity is killing people off.

4. The Darkened Moors Between Towns. Horror-themed adventures do not always have to involve a destination. They are just as likely to happen on the journey in between towns and villages. Venturing off the beaten path and crossing wild country is the perfect place to spring a horror-themed encounter upon players, or sow the seeds of one to come.

Darkened moors aren’t places the PC’s actively seek out, but are instead places where horrific adventure is thrust upon them in the form of random encounters and malign creatures that begin to follow them. They can become side quests and adventures just as easily as they can turn into a frantic chase as PCs try to escape to the next town before something dreadful and vicious closes the gap and kills them.