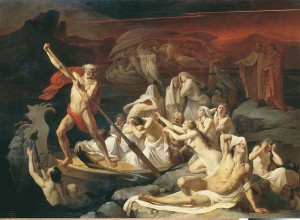 “How well I have learned that there is no fence to sit on between heaven and hell. There is a deep, wide gulf, a chasm, and in that chasm is no place for any man.”

This week I am mostly cataloguing and organising the 17+ (and still growing) pages of our brainstorm thread, which the damnably keen patrons are filling with such a never-ending river of great and profound ideas that it probably deserves an analog somewhere in Midgard’s cosmology (the River of Ideas maybe, washing over a horde of happy looking bards scooping up handfuls of the torrent). The problem is it’s all such great stuff – I can’t skip a single line. Like the paradox of Achilles and the Tortoise, I’m perpetually playing catch-up as the thread moves ever on to bigger and better things.

This week the talk has moved away from the cold (and sometimes hellfire hot) war between good and evil and onto the more ambiguous points and axis that lay between: In particular Law and Chaos, and how our cosmology might approach them.

Far from a Moorcockian the battle of feuding forces, one of the most out-of-the-box ideas talked about is the relationship between law and chaos being almost like would-be lovers in an elaborate courtship – each seeing something in the other that they recognise, each looking to convert the other to their cause. Angels and devils woo both their courts, but proteans and inevitables play a game of mirrors more abstract and esoteric than heaven or hell: Law has music and mathematics embodied by living symphonies and intelligent equations, but Chaos has fickle muses and lightning strokes of sudden inspiration and both sides fight with fractals and chaos theory. In some places across the planes the two work together or conjoin, and the whole is greater than the sum of its constituent parts. Even the great powers of heaven and hell aren’t sure how to deal with their intangible powers, and agents of Law and Chaos meddle in the affairs of both the wicked and the virtuous.

Dare the PCs explore where angels (and demons) fear to tread?

Blood War and System notes after the jump…

Even Planescape’s infamous Blood War never matched the ferocity of the Edition Wars, but thankfully Open Design patrons seem to be a progressive and open-minded bunch, happy to embrace and discuss the best concepts from all systems. We’ve fans of both Pathfinder RPG and 4th edition D&D (and quite a few who like both), plus the growing voices of AGE fans and a cadre of loyal 2e AD&D planewalkers. The setting materials of course, can embrace them all.

Our aim remains to try to provide as much mechanical support for both Pathfinder and 4th edition D&D as possible, one way or another. Patron votes count, so if you have a preference or want to help with the various conversions then sign up and let us know!

Commission Status: Last Call
Thanks to new patrons dropping their shiny gold pieces into Mammon’s tithe collectors, we now have 95% of our required patronage! Soon the Angel of Commission will swoop in to carry us aloft from Development Hell, so if you want the bargain price patronage for signing up before we hit the green light, now’s your last chance!

Check out Dark Roads & Golden Hells in the Kobold store and stop by the Forums to say hi if you’ve got any questions. Come and join us in exploring the outer planes!

1 thought on “Between Heaven & Hell”