Skip to content
Home / Delve into the Depths in the Kobold Blog / Relics of Power Finalist: Deck of Hellish Delights 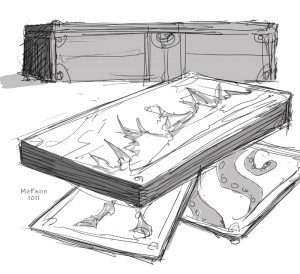 Welcome to the Relics of Power finals! Our third of ten finalists is the Deck of Hellish Delights. Remember, these entries are unedited so that you can have a similar experience to the one that the judges had while reading them. As a special treat, we are posting each one with an illustration that Chris McFann made for the item. Take a look at this artifact.

The Deck of Hellish Delights was created by the mad self-styled master of ink magic, the archmage Caderyn. The wizard is said to have created the deck as an act of revenge after losing several powerful artifacts to a wager with an archdevil. The humiliated and irate wizard subsequently used his arcane mastery to allow others to travel to infernal planes and bind and control the creatures therein.

The deck is always found with 22 vividly illustrated cards, usually in a dark wooden box. Half of the cards depict specific devils or demons. The remaining cards each display a major area of the Hells. A card becomes grey and inert once used until a full year has passed, after which it regains its colorful appearance and can be used again. Any card that is separated from the deck reappears with the rest of the deck the following day.

Each creature card is associated with a specific type of devil or demon. The archmage captured the essence of a specific creature of the appropriate type in each card, creating a bond between the creature and card. The creature card types are barbed devil, bearded devil, bone devil, erinyes, glabrezu, hezrou, ice devil, handmaiden devil, nabasu, nalfeshnee, and succubus. The individual beings portrayed in the cards can take no direct action against the deck owner.

A card holder can activate a creature card to summon the portrayed entity as if the user cast gate as a 20th level caster and used the “calling creatures” feature of the spell, with the following difference: the card holder can demand that the fiend serve it for a particularly dangerous task or a period of one month, without offering compensation. At the end of the task or time period the creature is returned to its home plane. Only one creature card from the deck can be in use in this manner during any period of time; activating another creature card immediately ends the previous creature’s service as if the time period had expired.

Alternatively, a card holder can activate a creature card to bind a different entity of the same card type. For example, the succubus card could be used to bind a different succubus than the one currently depicted. Binding a creature to a card is a full-round action that does not provoke an attack of opportunity, and the target must be within close range. Taking this action dissolves any bond between the card and any creature that was previously bound to it, and the card displays the newly bound creature.

Each hellscape card shows a wide view of a major area in a plane of Hell. The card holder can concentrate on the card to activate an effect equivalent to greater scrying cast at 20th caster level, targeting the location the card shows. The previously static image on the card shifts to accurately display what is occurring in the depicted area. The card holder can focus on a specific section of the image to cause the scrying sensor to move to that location. At any point during this observation, the card can be used to create a gate to the observed location as a 20th level caster using the “planar travel” feature of the spell. If the card holder travels to the other plane, the image on the card changes to show the site the card was activated for 24 hours. A card holder can use the card to open a return gate to that location while the image persists. The card becomes inert for the full year whether or not the planar travel aspect of the card is used.

Rumors persist that the deck was actually created as part of the archdevil’s prize for the wager, and that its use ultimately advances an unknown diabolical design. Whatever its purpose, many beings seek the deck for their own reasons. Some, such as the creatures depicted in the cards themselves, actively seek to trick adventurers into freeing them or destroying the deck.

The Deck of Hellish Delights is destroyed if it is submerged in a fountain on a heavenly plane for one year.

8 thoughts on “Relics of Power Finalist: Deck of Hellish Delights”