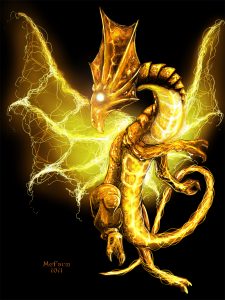 This miniature dragon, radiating near-blinding illumination, flies effortlessly toward a group of shambling zombies. The creature bursts into an improbably brighter ball of light, and moments later, nothing remains of the undead but piles of ash.

Typically found in temples devoted to healing and the sun, a beatific drake enjoys ministering to worthies who have been injured in righteous battle. Likewise, they seek out their own foes—undead—with a single-minded intent to destroy those mockeries of life.

SPECIAL ABILITIES
Channel Positive Energy (Su) The drake’s channel ability acts as if the creature had the sun’s blessing granted power from the Sun domain. When it chooses to harm undead creatures, it adds 6 damage, and undead do not add channel resistance to saves.

Death Ward (Su) A beatific drake continually gives all creatures within 20 ft. the benefits of death ward. If its aura is suppressed, it can recreate it as a swift action.

A beatific drake looks like a dragon sculpted from light. It measures 3 ft. from nose to tail tip and weighs less than 10 lb., giving credence to the theory the creature is indeed sunlight given form. The drake constantly sheds light seemingly as bright as the sun’s, making it difficult to do more than glance at the creature.

This drake seeks out clerics, paladins, and other good-aligned creatures who intend to wipe out an undead menace. It may accompany such a companion so long as it remains assured of the creature’s goal. The drake tolerates no mercy for undead abominations and considers anyone who keeps it from its appointed task an enemy. A character can attempt to convince the drake to stay its duty, but it requires a Diplomacy check (DC 30). (Any Intimidation attempt immediately incurs the drake’s enmity.)

Only by paying the ultimate price in pursuing its quest can a beatific drake reproduce. When the creature uses its sunburst ability it destroys itself, but an egg remains from which a newborn drake emerges, phoenix-like, 1 month later.