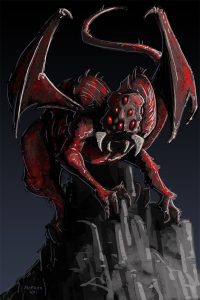 An impossible combination of spider and dragon stares at you with its six eyes while its mandibles clack in hunger. Hundreds of bright red spiders on the drake’s hide give the appearance of crawling skin. Upon seeing prey, the creature spits out a sticky glob, which expands into an acidic web, threatening to cover its target completely.

Unsettling in appearance and behavior, the arachnidrake (or spider drake) assumes the worst features of dragon and spider. The multitude of tiny red spiders covering nearly every surface of the creature does nothing to assuage the fear of potential victims. The creature constantly hunts down prey to feed its appetite as well as to care for its brood.

SPECIAL ABILITIES
Breath Weapon (Su) An arachnidrake spits out an acidic blob of webbing that spreads into a 30-ft. cone, ensnaring all in the cone’s path. Those who succeed at the Reflex save take half damage but avoid the web. Those trapped in the web take 1d6 acid damage/round (Fortitude DC 15 half). The save DCs are Constitution-based.
Poison (Ex) Bite—Injury; save Fort DC 15; frequency 1/round for 3 rounds; effect 1d4 Dex; cure 1 save.
Spider Swarm (Ex) An arachnidrake can direct the swarm of spiders living on it to attack 1/day. This functions as a quickened summon swarm, except it cannot be dispelled, and the swarm appears in the drake’s space.

A spider drake measures 5 ft. from snout to stubby tail and bears eight pincered claws. For its size, the creature is surprisingly light, typically weighing about 70 lb. Its hide matches the hue of the spiders it hosts, making it difficult to find individual spiders on the creature’s body.

Much like other drakes, spider drakes associate with humanoid creatures—but not those in any kind of typical civilization. Rather, they seek out drow, ettercaps, or the occasional hermitic spider worshipper. Drow see the drake as a tool they can use to weaken their enemies while ettercaps sometimes regard the creature as a divine avatar. A cunning arachnidrake uses this situation to get other creatures to hunt for it.

The spiders constantly replenish their numbers, and even if only a pair of the vermin survives an attack on the arachnidrake, they produce a new swarm in rapid fashion. The spiders cannot survive long when separated from their host. When the creature grows too old or weak to sustain them, the spiders encourage the drake to find a secluded spot in order to devour the creature and leave the carcass cocooned for 4 weeks. After this time, a new spider drake emerges, refreshed and ready to begin its continual hunting cycle again.