Skip to content
Home / Delve into the Depths in the Kobold Blog / Ask the Oracle: Cellphones

The newest player in my group is constantly checking their cell phone despite that I’ve mentioned more than once that we don’t usually use electronics at the table. On top of that, the rest of our party uses real dice, but he insists on using his cell phone for die rolling, so there’s no way to know if he’s cheating. I’m also convinced he’s looking up the stats for monsters we encounter and using them to decide character actions… I hate conflict, but this is really putting myself and the other players in a bad mood for the games. Help?

While it’s true many have embraced the electronic age of tablets, phones, and laptops at the table, there’s nothing wrong with wanting a more traditional game! Unfortunately, it sounds like your player may be craving a different style of play than the rest of you. While it’s perfectly okay for the group to decide electronics or die rollers are approved for your game, it really isn’t well mannered of your player to go against the wishes of the majority. I’m afraid you’ll have to put your foot down. 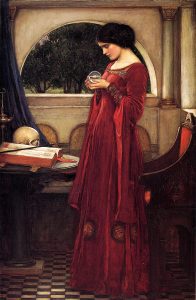 One way to approach the problem may be to get your other players involved. But be sure that your assessment that they agree with your no electronics rule is accurate, first, or you could find yourself drastically changing the dynamic of your game. Get everyone together, and start out by mentioning that you’ve noticed the new player really enjoys using his phone at the table. You might bring up that you haven’t had a group vote in some time over the use of modern tools, and you thought it would be a good idea to revisit the discussion to be fair to the player with the phone. Obviously, your troublesome player will be the only one who votes for electronics, leaving him the minority and setting the tone for the remainder of the games.

If you want to diplomatically cushion the blow, you could give the individual their own set of dice to replace his phone addiction. You don’t need to accuse him of cheating, just let him know that since the group as a whole isn’t inclined to change the way the game runs, he will have to put the phone away. He may argue the point, he may even decide the group isn’t for him and huff off to find a more modern game, but at the very least, you and your remaining players can get back to enjoying your game the way you prefer it.

In the future, I would recommend you establish this rule with new players from day one by placing a small basket on the table and having everyone put their cell phones in it when the game starts. This way, it’s just the everyday rule that the table is very obviously going along with. It’s always harder to correct established behavior than it is to begin how you would like to continue.

Have a question for the Oracle about gaming? Not about the rules of a particular system but about how to actually start gaming, about scheduling, about social etiquette, about how to handle problems that arise at the gaming table, or anything really about how you and others can have the most fun possible? Let us know in the comments!

3 thoughts on “Ask the Oracle: Cellphones”