Skip to content
Home / Delve into the Depths in the Kobold Blog / Christina’s First Gen Con Ever! 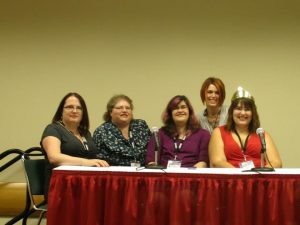 For the past several days, I’ve been searching for words to describe my first Gen Con experience. I’ve been a writer for well over a decade now, and words have utterly failed me. One now does come to mind, however: WOW!!!! That’s succinct, I know. Yet it accurately encompasses the extent of this massive event for me.

But, I’ll expand on that.

First, I have to say how overwhelmed I was by the kindness many of you showed me in answering my pleas for assistance in attending Gen Con. Without your aid, I would not have made it to the Big Show. I responded with personal thank-you notes as donations came in, and I did get to say thank-you in person to some of you, but I can never truly express how much getting to Gen Con meant to me.  This has been a geek girl’s lifetime dream, and you made it happen! THANK YOU THANK YOU THANK YOU!!! I honestly can’t say it enough. 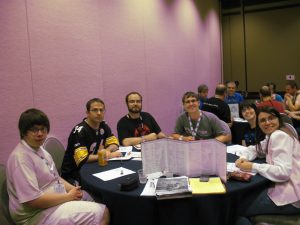 So, what happened at my first Gen Con ever? Many, many things. But I’m just going to highlight a few of the things that made me ecstatic.

Whew, that’s a lot of stuff! And yet it’s only a fraction of the fun I had at Gen Con. If I can ever get back, I will. If you’re a gamer reading this and have never been to the con, you should definitely make the pilgrimage—it truly is the gaming Mecca.