Skip to content
Home / Delve into the Depths in the Kobold Blog / Author Interview: Chris Willrich, Part One 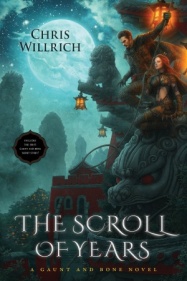 Chris Willrich, author of The Scroll of Years, answered a few questions for us about his past jobs, writing, and more! Come take a peek!

Chris, you have spent time as a librarian, a job that most people think would be great for an author. Is that true or false and why?

True, especially if your job covers fiction. It helps keep you aware of what’s been written, what’s popular, what people enjoy about certain writers and genres, and what the possibilities are. Meanwhile nonfiction books can spark all kinds of ideas. I mostly handled children’s books and programs, and even though I’m not currently writing for children, there’s a lot of fantasy and science fiction being written for kids. I found all that exuberant storytelling inspiring. One word of caution if you’re interested in public libraries, though—it’s not necessarily a “quiet” job from the librarian’s perspective! There’s a big customer service component. You need to be able to talk to people, and listen, and be patient.

Growing up, what were some of your favorite books/stories?

Tolkien’s The Hobbit, L’Engle’s A Wrinkle in Time, Le Guin’s Earthsea books, Lewis’s Narnia books. Hm, a lot of L authors there … But a little later, Zelazny’s Amber books, and then Moorcock’s Eternal Champion series. A lot of Arthur C. Clarke, too. I don’t remember specific short fiction as well, but I read Clarke and Bradbury collections, and issues of Analog and Galaxy and also Galileo, a small-press magazine that published a lot of good stuff, including early Connie Willis.

If you had to pick one favorite author who would it be and why?

Roger Zelazny. He takes you somewhere interesting on every page. Even his lesser work crackles with imagination, and his best work says things about the human situation while giving you a wild ride to strange worlds. He has a sense of tragedy and a sense of humor. He was always both artist and entertainer, and I admire his ability to thread that needle.

What is your all time favorite book and why?

That’s a hard one. I’m going to say my favorite book isn’t necessarily the one I think is objectively best—which saves me a lot of hair-pulling—but the one I re-read the most often. Zelazny’s Roadmarks. A crazy road trip across time and parallel worlds, with the “time machine” being a bizarre superhighway created by remote supernatural beings. Some individuals are “called” to the Road, and join this weird subculture of time travelers. In some ways it’s all just an excuse for dozens of cool set pieces and fight scenes. You can tell Zelazny had a lot of fun writing it.

Which famous author, other than Chris Willrich, do you most identify with?

I don’t know a lot about him, and I don’t write anything like him, but I really admire Stephen King’s work ethic and lack of pretension. I think fame can take perfectly decent people and turn them into jerks, but as far as I can see he’s a great example of someone who made it big but stayed true to himself. That’s how I want to be, whether or not I become well-known.

If you were a superhero, what would you want your super power to be and why?

I want a Green Lantern power ring and the willpower to use it. You get to rescue people with energy bubbles, create any shape you can imagine, fly at faster-than-light speeds, and interact with beings on other planets. If I can’t have a power ring, then extreme durability—the ability to withstand bullets, fire, poison, and so on, but not things like nuclear weapons or mountains falling on you. That would make me a credible super hero and rescuer (and extreme explorer in my spare time) but hopefully avoid let me stay connected to my humanity. Yes, I’ve given this some thought.

You have written several highly lauded short stories. How much different was writing a novel versus short stories?

Novels are a lot more forgiving of digressions and an attitude of “Hey this supporting character is interesting, let’s find out more about her.” With a short story you can meander a little, but you need to keep your eyes on the prize. Likewise, the tone of a book can vary in a way that a shorter work can’t. For example you can have an extended humorous section (like the wedding in The Scroll of Years) in an essentially serious book.

Watch this blog for the next part of this interview!