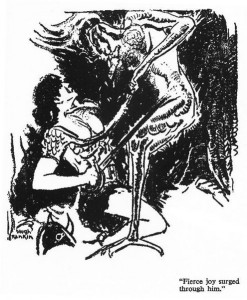 “Know, O prince, that between the years when the oceans drank Atlantis and the gleaming cities, and the years of the rise of the Sons of Aryas, there was an Age undreamed of, when shining kingdoms lay spread across the world like blue mantles beneath the stars…” —Robert E. Howard, “The Phoenix on the Sword”

Well met, intrepid reader! If you’ve seen my other work for Kobold Press, there’s no hiding the fact that Weird Tales and the writing of Robert E. Howard have been a huge influence on my lifetime of gaming. So, I wanted to honor Howard by briefly studying the most cohesive world he ever built—the world of Conan the Barbarian.

Howard termed Conan’s time “The Hyborian Age.” And its place was the prehistoric realms of Hyboria and the outlying “savage” lands. The map of the Hyborian Age isn’t too dissimilar from what we imagine the pre-cataclysmic continent of a unified Europe/Asia/Africa to look like. It’s a time of young civilizations and forgotten kingdoms—a time of high adventure! Thus, the Hyborian Age becomes one of the best playgrounds imaginable when it comes to tabletop roleplaying. There have been many notable adaptations throughout the years of the Conan mythology for pen and paper RPGs. And the Cimmerian’s influence is no stranger to the core concepts of D&D itself—heroic adventure in the face of thrilling adversities, among them.

If you’re familiar with Conan and the two-fisted tales of his creator, I hope this article serves as a friendly reminder. If you’re new to “the days of high adventure,” I’ll strive to provide an adequate primer for what to expect from Howard’s savage tales of Conan the Cimmerian and how to start weaving them into your own game.

The Men and Women of the Hyborian Age

“Civilized men are more discourteous than savages because they know they can be impolite without having their skulls split, as a general thing.” —Robert E. Howard, “The Tower of the Elephant”

This classic quote from a quintessential Conan story very adequately sums up the clashing kingdoms of the Hyborian Age, from King Conan’s proud Aquilonia in the dreaming west to Stygia with its shadow-guarded tombs in the south. And though their people are a varied lot, one thing unites them: their humanity. Primitive savages and strange prehistoric races may lurk in the dark corners of the earth, but the civilizations of the Hyborian Age are human ones. If you’re trying to capture the essence of Hyboria in your home game, this means regulating your players to human characters while exploring and developing the myriad number of interesting options available to them in modern editions.

Much of the magic of the Hyborian Age is predicated by the notion that mankind is like a childlike savage in a time full of strange, dark secrets that defy mortal comprehension. Sorcerers—while few and far between—are frequently cast in a shadowy light, since their ill-gotten gains often require grotesque rituals at the servitude of evil elder gods or bizarre—almost alien—creatures. Although many of the peoples of Hyboria worship somewhat familiar deities of pre-Christian mythologies, there remain evil beings from ages past exerting their immortal, sinister influence through humanity. And though nothing ever killed King Conan, curiosity most certainly killed the cat (and many would-be Stygian witches).

Because of the inherent danger, sorcery is a scarce art. And as a result, magic items and the like are more of a rarity in the Hyborian Age than other fantasy settings. You don’t need to treat every item like an artifact. But if you want to capture the proper primeval atmosphere in your game, you’ll need to maintain the proper sense of reverence; the trademark Weird Tales mystery is gone once your treasures are reduced to mere trinkets.

Just as the dangerous and forbidden magic of the Hyborian Age has a mysterious, “real-world” feel to it, the creatures of that time are often echoes of a grim reality rather than the stuff of pure fantasy. Howard looked to monsters of myth and legend for inspiration to populate his world, not only when it comes to aesthetics but also in terms of frequency. The majority of Conan’s adversaries are actually human. When he does encounter a monstrous creature, it more often than not has a real-world analogue or some hypothetical origin a civilized mind might devise to try and keep sane against the coming of the night.

The monster appearing most frequently in Howard’s stories are giant serpents or snakes, which are detailed in “Black Colossus,” “Red Nails,” The Hour of the Dragon, and others. The Serpent Men of John Milius’s Conan the Barbarian motion picture are actually adapted from Howard’s King Kull stories, but are well at home in the Hyborian Age nonetheless. Other enlarged wildlife abounds, from the giant spider of “The Tower of the Elephant” to the classic Hyborian “dragon” from “Red Nails” (which is, in actuality, little more than a prehistoric reptile). Howard does delve more into the fantastic, however, when it comes to religion and the afterlife. Many of his most memorable creatures are undead monstrosities and elder things from outer realms. There will always be exceptions. But in Howard’s world, exceptions they remain.

Now, don’t get me wrong: I adore Middle-earth as much (if not more) than the next guy. I also revel in the high fantasy and multiplanar magics of realms like Moorcock’s Melniboné and Leiber’s Lankhmar. But nothing satisfies the lust for adventure like the pulp classics of Robert E. Howard and Conan, his most enduring and endearing creation.